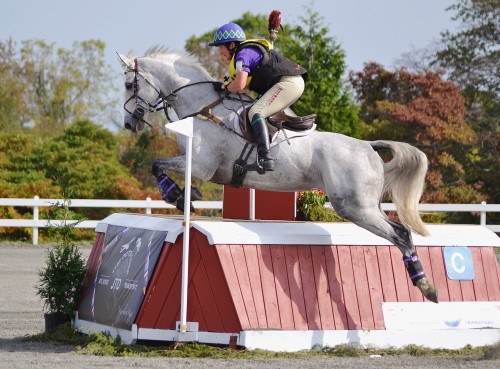 Sally Cousins and Ideal Contini before their fall. Photo by Jenni Autry.

I could give you a play-by-play of the press conference with the top three riders in the CCI3* and CCI2* at Fair Hill International, but I decided it would be much more interesting to bring you the highlights in a quickfire format. But first, I’m relieved to report that Sally Cousins has been released from Christiana Hospital with a concussion. She had a scary fall from Ideal Contini at fence 16 in the CCI3*, and it thankfully seems like she’s going to be just fine. Without further ado, a brief summary of the press conference:

1. Ryan Wood, who’s currently tied for third place in the CCI2* with Fernhill Classic, hasn’t competed at Fair Hill in five years. When Ryan hesitated to give an explanation as to why it’s been so long, reporter extraordinaire Nancy Jaffer asked him if he’d been in jail all this time.

2. Allie Blyskal-Sacksen, who’s in second place in the CCI2* with Sparrow’s Nio, her powerhouse porse — a pony-horse hybrid, if you will — said she came back to Fair Hill in part this year to prove to Eventing Nation that she could, in fact, do dressage. Touche, Allie. We think you’re awesome.

3. This is Colleen Loach’s first-ever trip to Fair Hill, and she capitalized on it with her catty mare Freespirit; they’re currently tied for third in the CCI2* with Ryan and Fernhill Classic. Clayton Fredericks issued a mandatory team trot-up for all the Canadian horses at the end of cross country, and Colleen kept him waiting to speak at the press conference. Sorry about that, Clayton.

4. Everyone agreed in the press conference that Brian O’Connor was a bit too hard on Sharon’s past bad luck here. Yes — she broke her hip here a few years ago. But that injury is long in the past, and she’s enjoying the overnight lead in the CCI2* with Under Suspection. For what it’s worth, I know Brian is a huge Team Orange fan, so we won’t hold it against him.

5. Jan Byyny had two stops with Inmidair here last year; what a difference 365 days make, and she’s sitting atop the leader board in the CCI3* tonight. She said she tends to ride much better when she doesn’t count and worry about the striding and instead allow herself to just follow her plan. It certainly worked for her today.

6. Will Coleman, on the other hand, admitted he didn’t have much of a plan at all this morning, mere hours before he set out on course with Conair. He watched some of the riders in the two-star and eventually hashed out a strategy that definitely worked, as he’s sitting in second place overnight in the CCI3*.

7. Doug Payne said he thought a lot of the problems at Fair Hill happen because riders discount the fact that many of the landing spots to the fences are lower than the take-off points, which catches horses off guard. As Doug put it, that accentuates mistakes made on the take-off side. That’s great insight from the rider who’s sitting in third place in the CCI3* overnight with Crown Talisman.

And last but not least, check out this footage from the influential Dutta Farm Yard in the CCI3*, where so many riders had trouble at the B and C corners. Watch each of the riders and horses navigate 13ABC and vote for who jumped it best. The final horse inspection starts at 8 a.m. tomorrow morning, and show jumping begins at 10 a.m. Go Fair Hill. [Live Scores] 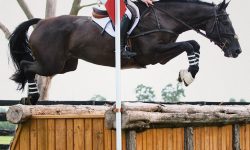