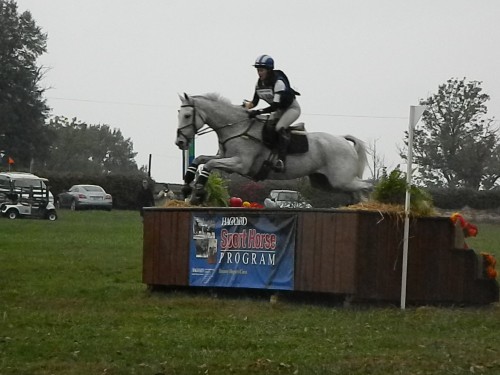 It was a soggy day on cross country for the divisions running today. I was on hand to watch the Prelim and a portion of the Training Three Day today, and the pairs that I saw seemed to be rocking around course, at least at the point where I was able to see them. I must give a big shout out to Andrea Johnson and Wapentake, of Team CEO Eventing, who rocked around the cross country as if it were made of crossrails. I have not gotten to speak with Andrea or coach Megan Moore yet, but Megan posted on her Facebook that every fence was “spot on” and that she was an extremely proud coach.

The Prelim Three Day was small to begin with, and unfortunately it grew a bit smaller after cross country, with one pair (Lisa Mendall and Hokus Pokus) retiring and one (Brigette Kettell and Calvin) were eliminated. Going into tomorrow’s show jumping, Andrea Johnson leads after adding no penalties to her dressage score of 38.

Jocelyn Hawe and Going Going Gone finished the day in second after also having a double clear round.

In the Training Three Day, Waylon Roberts held onto his overnight lead by adding a double clear cross country round to his weekend. DeAnne Burke and Davinci are hot on his heels, and there is no breathing room between the top two placings going into show jumping tomorrow. Ten horses did not complete the cross country in the Training Three day, and there were also plenty of double clear rounds to help others jump up the leaderboard. 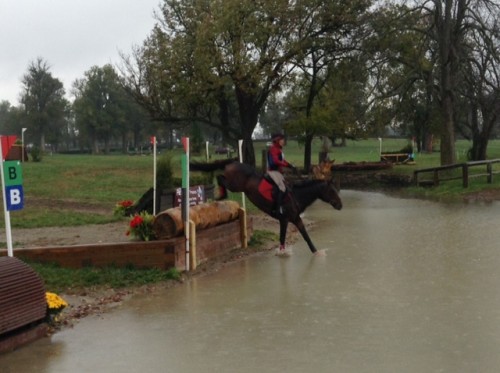 Cindy Bonamarte and Puma jumped form 28th to 12th with a brilliant cross country round. Photo by Sally Spickard

The Three Day divisions will wrap up their weekend with show jumping tomorrow, while the remainder of the horse trials divisions will run cross country. I have many people to catch up with, so stay tuned for much more from Kentucky.