What’s in Your Ring? is an EN series sponsored by Attwood Equestrian Surfaces in which riders share their favorite jumping exercises. It’s easy to get stuck in a training rut, and we hope this will inspire you with fresh ideas that you can take home and incorporate into your own programs. 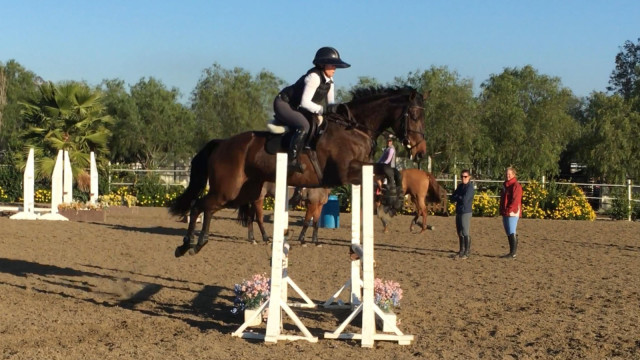 Buck Davidson visited Southern California in January for a much anticipated two-day clinic at the beautiful Copper Meadows Eventing facility in Ramona. The weather has been soggy here on the West coast of late, so much so that it made preparation for the clinic nearly impossible.

Thankfully, the Copper Meadows crew was hard at work preparing the footing for Buck, and riders were able to enjoy a brief reprieve from the rain on perfect footing. It was a great way to get a tune up for the upcoming season, and Buck was definitely up to the task.

On the first day of the clinic, Buck set up an intriguing series of angled lines criss-crossing the middle of the jump arena. As we scurried about to get the course set the night before, most of us were scratching our heads wondering exactly what Buck had up his sleeve.

“Surely he doesn’t intend to make us all jump those angles?” we wondered aloud. Well, that was definitely his intent, even for the lower level horses and riders. 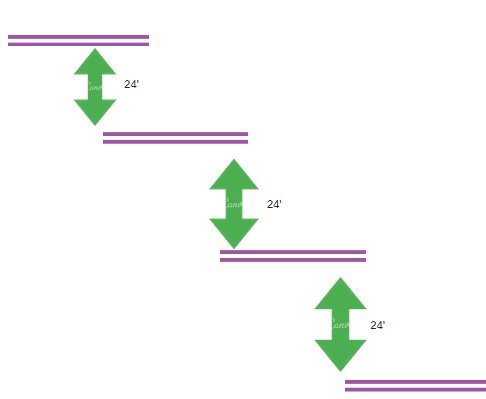 The distance should be walked as one stride middle to middle at an angle.

Buck’s angled lines consisted of a four-fence question spaced at three, one and two strides. On the opposite diagonal, the angles were set at three strides. Buck varied the obstacles with verticals and square oxers so that the line could be jumped from either direction.

To begin, Buck put the fences down to crossrails, even for the upper-level horses, so as to introduce the exercise in a non-threatening manner. Buck pointed out that he’d rather have the horses make mistakes when it was easy to correct, so he had riders just trot through the lines, letting their horses peek if they needed to.

From there, Buck raised fences incrementally as the horses progressed. Because of the varying distances between each fence, the riders needed to focus on both accuracy and impulsion in order to make the striding work. If a horse came off of the line or lost impulsion coming in, the entire line was sacrificed or the rider was left to try to over correct.

The really interesting thing about these angles, as tough as they looked at first glance, was that the horses that were going Beginner Novice and the horses who were Advanced horses all got something out of it. I didn’t see any horses or riders who were overfaced, even with the technicality of the exercise.

Instead, Buck broke it down so that it was doable right from the beginning and was patient if anyone had trouble. He is a big believer in setting both horse and rider up for success, and it showed in his patient and encouraging teaching.

The idea of positioning your horse exactly where he needs to be to simplify what you’re asking of him was paramount throughout the clinic. Being aware of your aids — not telling your horse to go in a crooked line and then pulling them off of that line in an attempt to achieve straightness, for example — can help you more effectively communicate with your horse.

In all, the clinic was very educational and it was a privilege to see Buck in his teaching element. I think I can speak for all of the auditors and riders when I say that we all learned a lot and were lucky to have the opportunity to learn from one of the best in the sport. The fun thing about the angles is that they may look intimidating but they are totally doable, so definitely try it at home!