Last week, we launched a contest from our sponsor, OCD and Doc’s Products Inc., inviting you to share your rehabilitation stories with us. We’ve had some wonderful entries so far, and we’ve decided to start sharing them this week. Entries are still open, so don’t forget to send your story to [email protected] for your chance at a great prize pack from OCD! 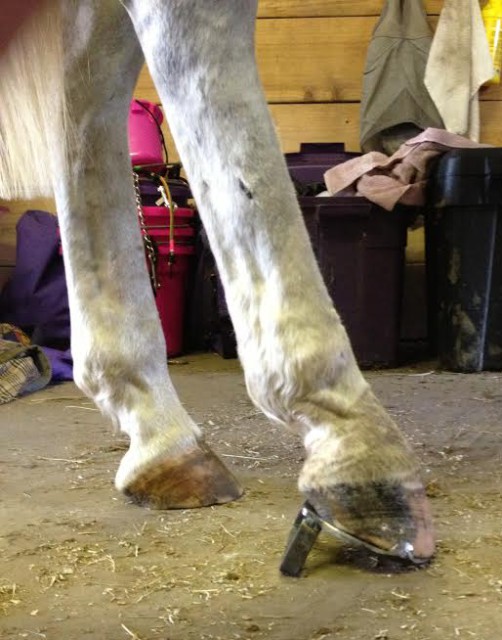 What girl doesn’t love a pair of high heels?

I’d always been very lucky to never have issues with lameness. There was occasional foot soreness or just an overall “mare day” here and there, but nothing significant, and I credited that to A Shady Lady’s (Shadow, to her friends and servants) sturdy build and mystery breeding.

I was elated with her performance at the Steepleview Horse Trials in Minnesota that Labor Day weekend in 2013 (minus the dressage, but we’ll just skip on past that part), and after consulting with my coach, decided to go ahead and make the move up to Training. After years of trying to unravel the mystery of this complicated, intelligent, too-athletic-for-her-own-good mare, we were finally a team, and I was thrilled.

Sept. 2, 2013, as I was planted firmly on the couch and relaxing after the long weekend, my phone rang and the words on the other end made my stomach drop to the floor: “Hey … so, Shadow isn’t weight bearing on her right hind … doc wants to x-ray her, so I’m getting her in to the trailer and heading over to the clinic.”

I launched off the couch and into my truck before my friend could finish her sentence and raced the 40 minutes to the clinic. As I pulled in to the parking lot and fumbled to put on the sneakers that I hadn’t had time for in my haste to get out of my house, I saw my friend walk out of the exam room and take a deep breath. “Something is broken, but she’s not sure what just yet.”

I felt my knees go weak and the tears of uncertainty that I’d been choking back on the ride out exploded into incredulous sobs. This wasn’t possible. This mare had just jumped around a horse trial, foot perfect, doing what she did best. How could the first lameness issue she’d ever had be one that could end her life? I walked around the corner into the exam room, trying to prepare myself for the devastation that I would see, only to have my perky mare look over at me and nicker.

The rest of the time spent in that exam room is a blur. I came to learn that Shadow had fractured her right hind navicular bone into four visible pieces, and there was an additional small fracture in her long pastern bone. There were hugs and tears and words that shouldn’t be repeated, as my friend and vet consulted via phone with the surgeon about Shadow’s prognosis.

It wasn’t good, I was told; this type of injury is career ending and we may not be able to get her sound enough to decorate the pasture. The words “all options are on the table at this point” were uttered and, knowing full well what that meant, I looked at my horse, my partner, with as heavy a heart as I’d ever felt.

She looked calmly back at me and proceeded to check me for treats. Banamine induced perkiness or not, there was no way I could let her go, not without trying to help her heal. “Where do we start?” I managed to squeak out softly. 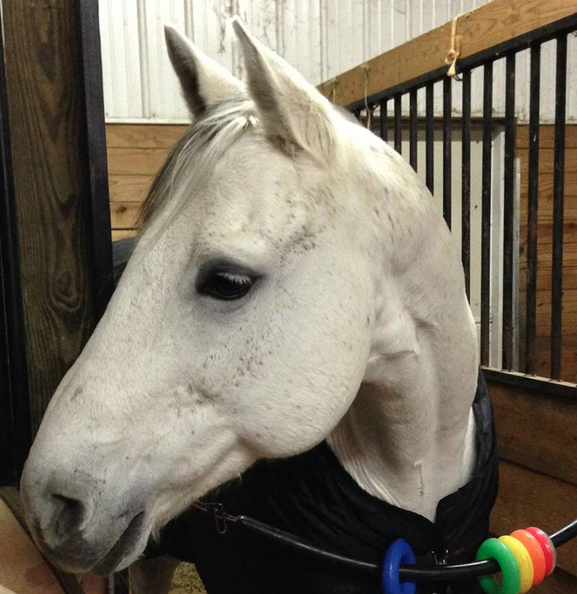 Shadow staying happy through her rehab.

A flurry of activity ensued with those words, as her leg was wrapped and padding built up under her foot to keep pressure off of her heel and the depressing chunks of bone above it. We discussed a special shoe that would need to be built for her, to allow her to bear weight on that leg, while alleviating any added strain on her navicular bone and deep digital flexor tendon.

Eight months of stall rest, with the possibility of small paddock turnout after four months. Shadow was a 24/7 pasture kinda girl and was fitter than she’d ever been (as I’m sure our dressage judge from that weekend would confirm). I wasn’t sure she could handle being stall bound for such a long time, but I was determined to give it a shot.

The first week went by with lots of tears and bated breath, but Shadow surprised us all and settled right in to life in a stall. The farrier came out and built a shoe with a bar on the back that raised Shadow’s heel to approximately 12 degrees of angle from the ground. The plan was to reset the shoe every four to six weeks and reduce the amount of angle by 3 degrees each time. If that went well, we could start taking short hand walks after the first four months.

I spent time with Shadow every day, just hanging out in her stall, grooming her, trying to come up with activities to keep the boredom to a minimum (bobbing for apples in her water bucket and Find the Buried Carrots were favorites for her). I alternated days of rubbing down her right hind with liniment and just giving it a good curry, in an effort to keep the blood flow strong around the area of her injury.

I also regularly wrapped her with Back on Track quick wraps and added a couple of supplements that would hopefully encourage quick and complete healing. I had no idea if any of these things were helping, but they made me feel better, and she didn’t seem to mind.

All the while, Shadow was handling her stall rest like a champ. No sedatives needed, no unfortunate habits built, and she stayed perky and invested in the world around her. She also seemed to have almost no difficulty standing on her injured leg. Her high heeled shoe was definitely doing its job!

Twelve weeks into her stall rest, Shadow was cleared to go for short hand walks. She was blowing everyone away with how comfortable she seemed and how well she was managing life in a stall. We started with five minutes a day for 10 days with the idea that we would increase the time by five minutes every 10 days, if she was handling the exercise well.

She handled it beautifully. It was nearly December now, and we were having a particularly bitter Minnesota winter, with stretches of days where the temperatures wouldn’t even reach positive numbers.

Shadow and I got our walks in every day, carefully picking routes around the ice, even building a small “track” from hay and shavings within her stall and the small, attached turnout paddock when the footing got too icy to safely walk outside. She seemed to understand when I would caution her about the conditions outside and plead that she keep her sassy routine under wraps on the ice.

Shadow never missed a beat and marched along, strong and sound, even on her high heel. She had to wear bell boots for our walks because she would routinely track all the way up and grab her front heels, even with her injured hind leg.

We worked up to walking 45 minutes a day, every day. By this time, Shadow was allowed to spend a few hours in a paddock each day and we were down to just a thin, raised pad under her shoe. She continued to impress everyone with her seemingly miraculous recovery and kept getting stronger and stronger.

In mid-March 2014, a mere six months after her injury, I heard the words that I’d never expected to hear again: “Go ahead and get back on her,” and on March 22, we went for our first short ride. Despite the flood of emotions rolling through me, Shadow marched along as though it was just another day, and she hasn’t looked back.

She has now been cleared to go back in to full time dressage work, and we’ve even been working with some half-raised trot poles. We injected her navicular bursa in the fall, and she is still receiving regular chiropractic adjustments. Shadow has taken everything in stride and is still continuing to get stronger as we slowly work at building back flexibility and strength she’s lost through this ordeal.

I have no idea how much further she’ll go, if at all, and I’m not concerned about that in the least. I know I have a very special partner who has defied all of the odds stacked against her and proven once again that event horses are like no other sport horse out there. She has no plans to stop and has never once looked back, and I owe to it her to follow her lead.