We’re pleased to introduce a new series presented by Merial which will catch up with horses who have retired from a successful eventing career. If you have a horse you’d like us to profile, please email [email protected]. This month, we check in with Jessica Payne’s former four-star ride, High Society III. 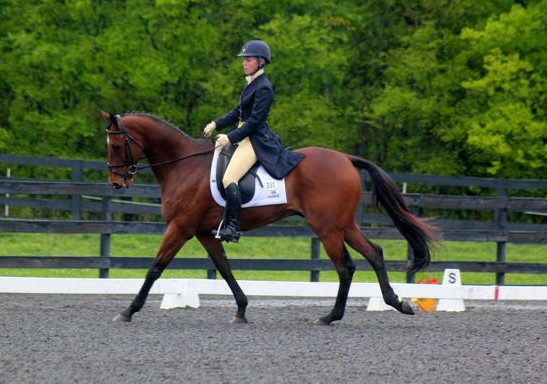 Jessica Hampf (Payne) and High Society III at The Fork in 2012. Photo by Samantha Clark.

Jessica Payne (then Hampf) was on top of the world when she and her OTTB partner, High Society III, joined the ranks of the four-star riders in 2010. Together, she and the now 19-year-old gelding completed Rolex three times, improving on their result each time, culminating in a 19th place finish in 2012.

Representing Canada, Jessica and “Trevor” also completed numerous three-star competitions, including the CCI3* at Blenheim. After a successful upper level campaign, Jessica made the decision to retire Trevor from competition at the top of the sport. “He was getting older, and we hadn’t made the Canadian team,” Jessica recalled. “He was a horse of a lifetime for me, and he owed us nothing.“

Jessica knew Trevor would still want a job, so she competed him in the jumper ring at the 1.35m level after retiring him from eventing competition. 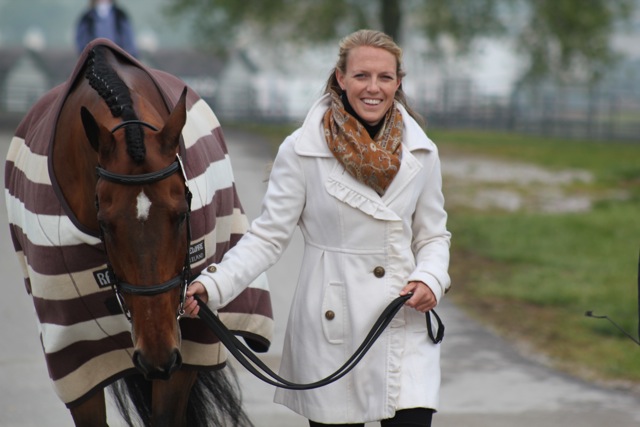 Jessica Payne and High Society III at Rolex in 2012. Photo by Samantha Clark.

Wendy Luce was a student of Doug Payne’s, having previously sent one of her hunters to Doug for training. Wendy went on to own event horses, which Doug trained and competed, and was entertaining the idea of taking up the sport herself.

“I’ve ridden hunters basically my whole life,” Wendy said. “I was exposed to eventing through Doug, and I was quite taken with it. I never thought I’d ever do it myself!”

Through Doug and Jess, Wendy met Trevor, who she fell in love with after her first lesson on him. “Jess told me I could try Trevor, as he was retiring from upper levels,” she said. “I sat on him and I just fell in love. Everything just fell into place — I’d never be eventing if it weren’t for him.”

Having ridden Trevor for so many years, Jessica knew he was the type who liked to take care of his rider but wasn’t sure exactly how he’d adjust from galloping at four-star speed to cantering around Beginner Novice courses.

“Whenever I left the start box, I knew he’d take care of me no matter what happened,” Jessica said. “I wasn’t sure what to expect at the lower levels — I thought he’d maybe want to go fast on cross country, but he got time penalties! From the beginning with Wendy, he’s gone in all three phases in a rubber snaffle and leaves the start box quietly and carefully.” 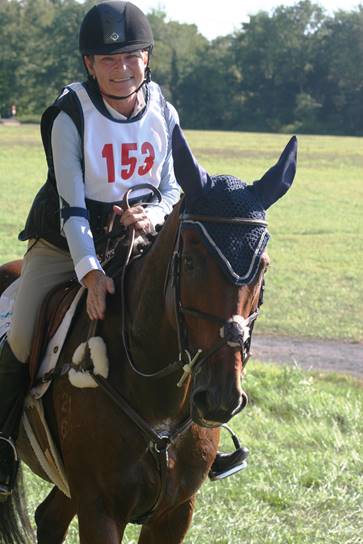 All smiles after Wendy and Trevor’s first cross country together. Photo by Fred Luce.

Wendy credits Trevor with boosting her confidence as a rider. “He never says no,” Wendy said. “The things I always felt I could have done better in the past, I’m doing better now because he’s given me the confidence to do so. He’s taught me to use my body more than my hands, and it’s been a really good learning experience.”

Last year, Wendy and Trevor completed three Beginner Novice events and have plans to step up to Novice in 2015. “My objective is to place in the top five at our Novice events,” Wendy said. “I’m working very hard on the dressage in order to achieve that goal. I’m mainly excited to just continue on with him and keep learning.”

Jessica, for one, is happy her partner has found his niche in retirement. “I think he likes the adjustment,” she said. “He doesn’t care if she makes a mistake, he’s got her back. She was competing him a year after he ran Kentucky the last time — he’s just so willing to show her what to do.” 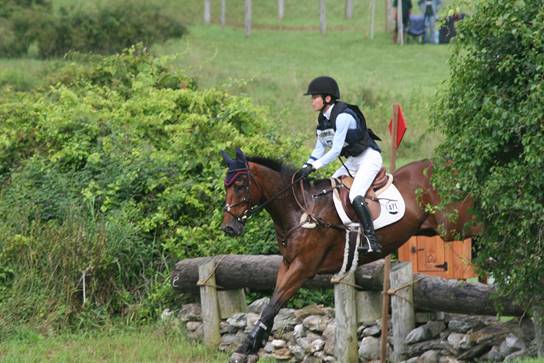 Wendy and Trevor competing at Millbrook. Photo by Fred Luce.

Wendy’s done everything from hunter derbies to trail rides with Trevor. She’s thankful to have found a horse that she can continue her education on. “Although I’ve found dressage ‘challenging’, I’ve learned a lot about my position…and that’s helped my riding across the board.”

“There is a wonderful Espirit de corps in eventing that I just never experienced in the hunter show realm — a group of people who truly love what they are doing, love their horses, and enjoy being together in the effort.”

You’d never know Trevor was 19, and we’ll certainly be seeing more from this happy couple, romping around their Novice courses without a care in the world. “I’ve had a lot of horses in my life,” Wendy said. “But I’d have to say that this one is really like a soulmate.”