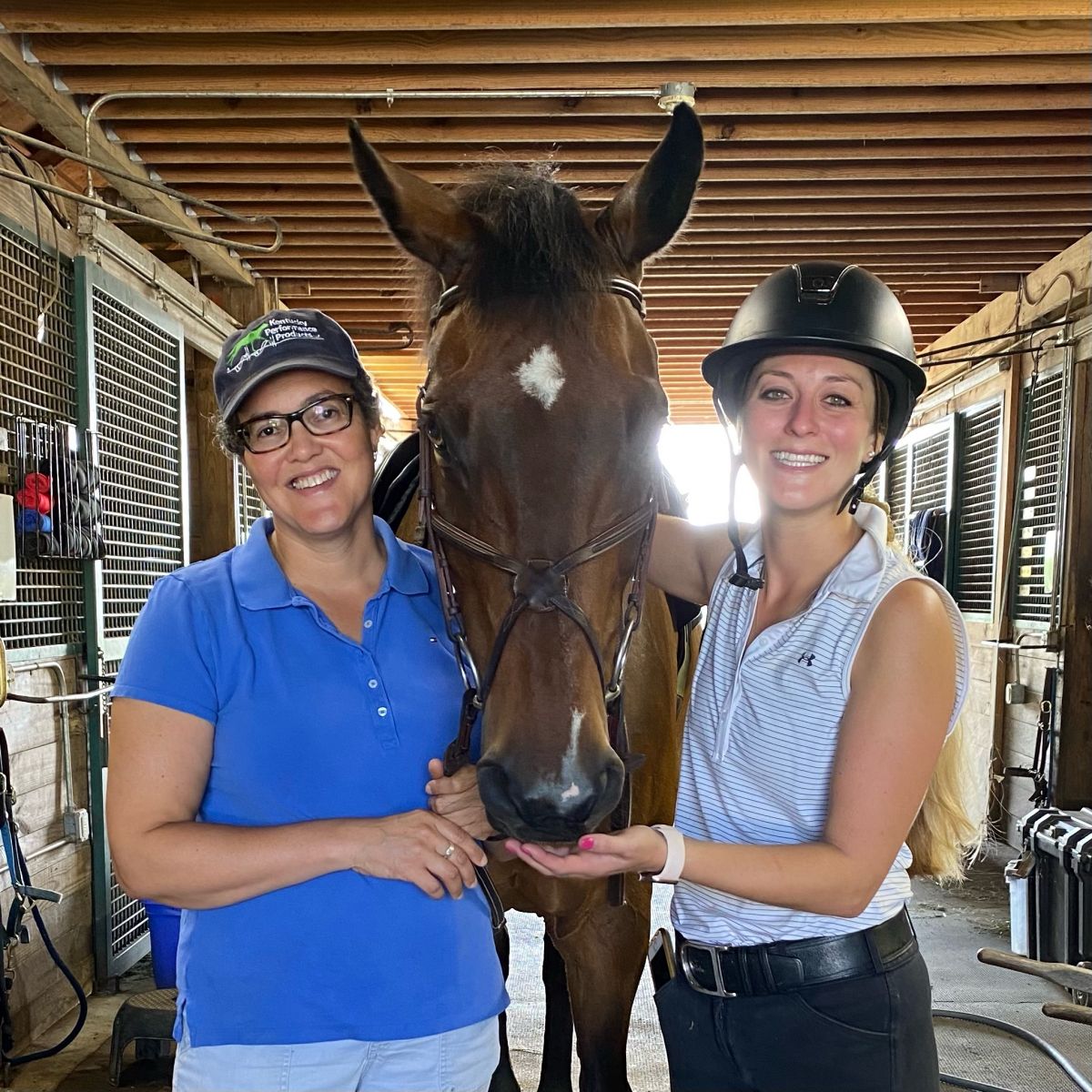 It’s been nearly five years since we last saw Loughan Glen, the longtime five-star partner of Clark Montgomery, leave the start box in international competition. Now 18 years young, the striking Irish gelding by Limmerick is far from lolling about in his field in retirement. He’s kept quite busy, in fact, semi-un-retiring for a stint eventing with eventual new owner Kelsie Bricker (and keeping those sharp dressage skills in tact: the pair won their final event together at Novice on a score of 17.1).

Though “Glen” is still happy to hop around a jump course, he spends much of his time these days showing off his dancing skills with a new friend in Dr. Anastasia (Stacy) Curwood of Versailles, Ky. A truly kind horse through and through, Glen seems to take to any task with enthusiasm – especially when there’s a prospect of food at the end (to which I can fully relate). I’m always keen to meet a favorite horse whose career I’ve followed, and I had the pleasure of getting in some facetime with the superstar himself, spending the afternoon with Glen and Stacy one pleasantly warm afternoon this fall.

Stepping back a few years, into the early parts of Glen’s retirement from upper level competition, we find the intersection of Glen and Kelsie Bricker’s lives. “I started working for and riding with Clark in December of 2017,” Kelsie recalled. “I would get to ride the horses and he’d let me ride Glen from time to time. I remember thinking he was a dream.” 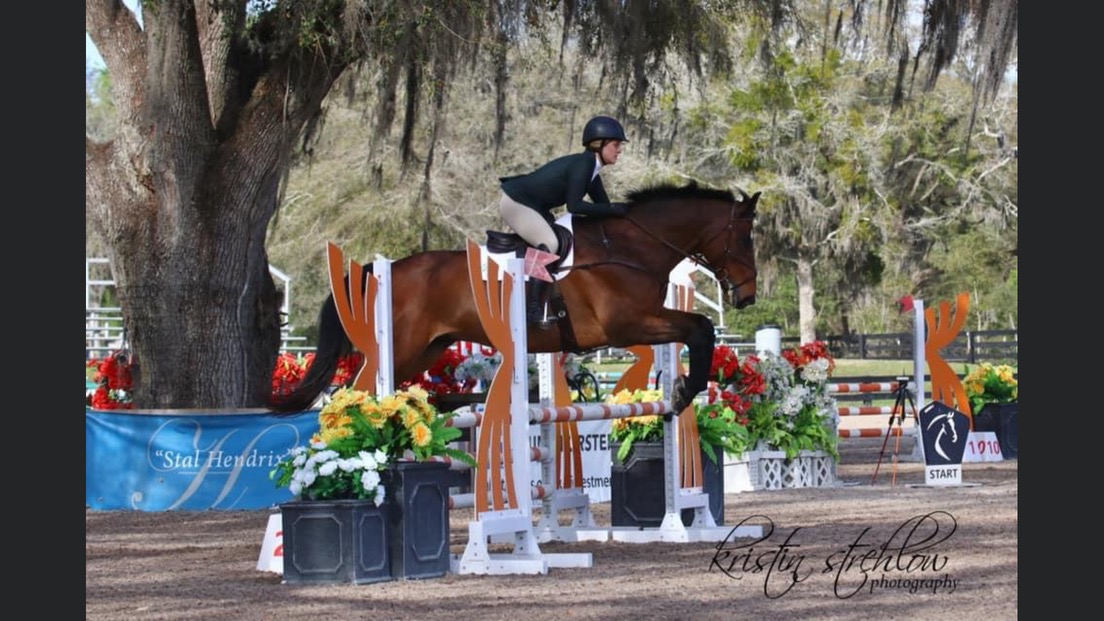 At that point, Kelsie recalls, “both of my horses sort of broke at the same time,” leaving her with an empty entry for the upcoming Florida Horse Park event. Clark approached her with an idea: why not take Glen in the Novice? “So I took him and just had a blast,” she said. “Until he dumped me over his head at the second show jumping fence! Clark helped me with him over the winter and then in March I took him to Rocking Horse. Glen hadn’t gone cross country since Kentucky (in 2017) but he was just brilliant, per usual.”

Eventually, Holly and Will Becker, who owned Glen at the time and throughout his partnership with Clark, which took them around the world and to the 2016 Olympics, approached Kelsie with an offer to sell her the gelding. In the fall of 2018, Kelsie officially became Glen’s new owner. Together, they dabbled in a bit of everything – hunters, equitation, trail riding, eventing. He took Clark’s daughter, Vivian, out for a spin around some leadline classes. “He’s the absolute most perfect horse,” Kelsie described. 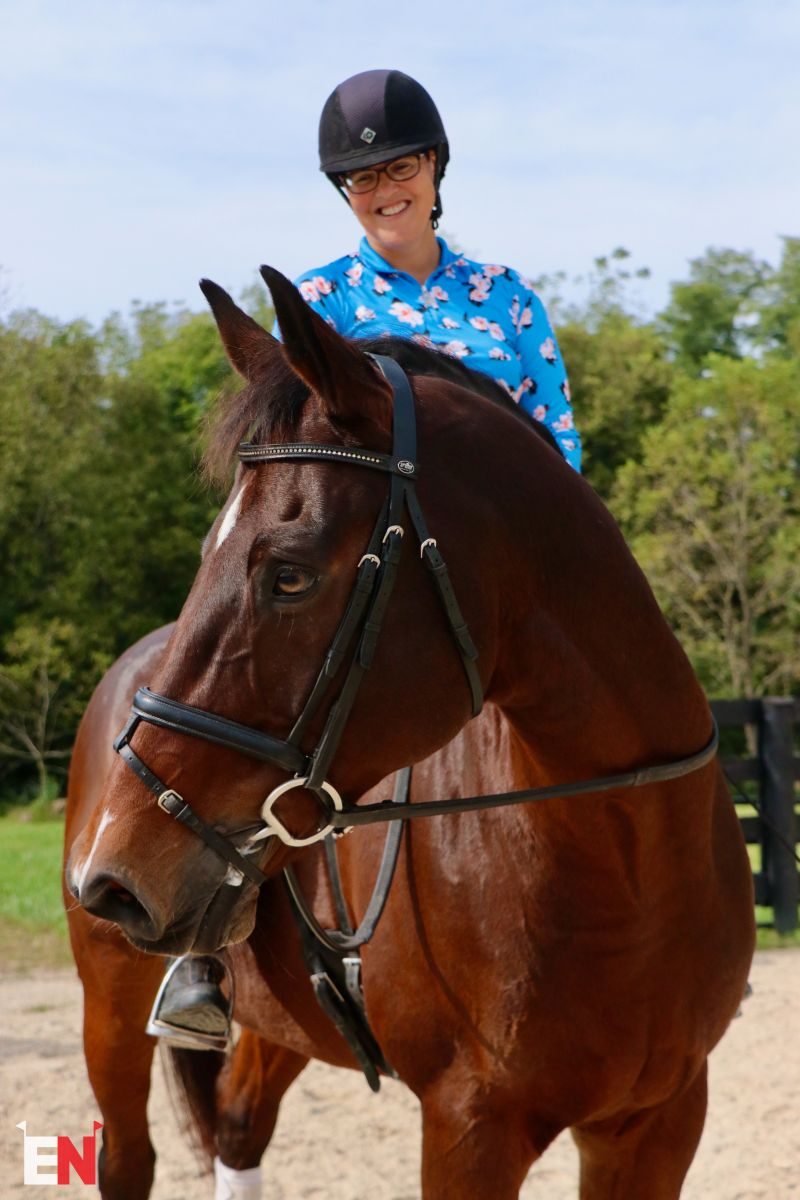 Over time, Kelsie became increasingly involved in her business, Ride Equisafe, which keeps her on the road for much of the year. It happened to be that she boarded with Megan Edwards in Versailles, the same barn where Dr. Curwood kept her horse. “I started traveling a lot more this year, and Stacy started riding Glen when I was away,” Kelsie said.

Stacy, who evented previously and now competes in pure dressage, says she “needed another horse on the payroll like a hole in the head” (also relatable), but when Kelsie presented her with the opportunity to lease Glen to pursue her dressage goals with, it was an offer she could hardly refuse. 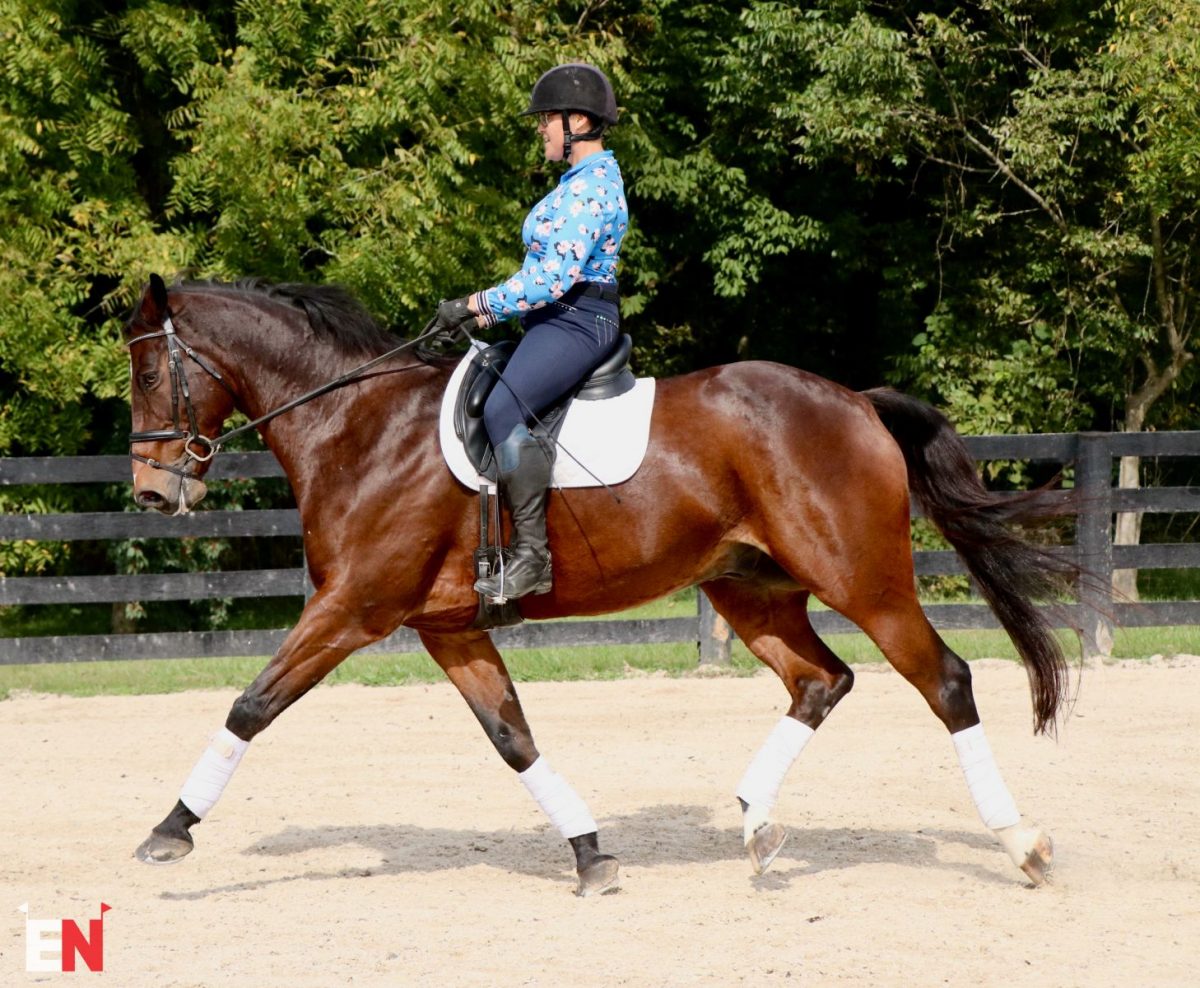 “Kelsie’s schedule was really picking up, and so she asked if I’d be interested in leasing him,” Stacy recalled. “I didn’t need another horse, but it was this horse. So it just became a matter of figuring out how to make it work.”

It’s turned into a wonderful arrangement for both; Kelsie has the peace of mind knowing that Glen is well tended to while she’s on the road, and Stacy has a new partner to pursue her goals with. “This is the most I’ve been able to do with my dressage,” she said. I sat on the fence and watched her take Glen for a light flat ride during my visit. His movements hadn’t lost their smoothness – he’d still go and give the best horses a run for their money. 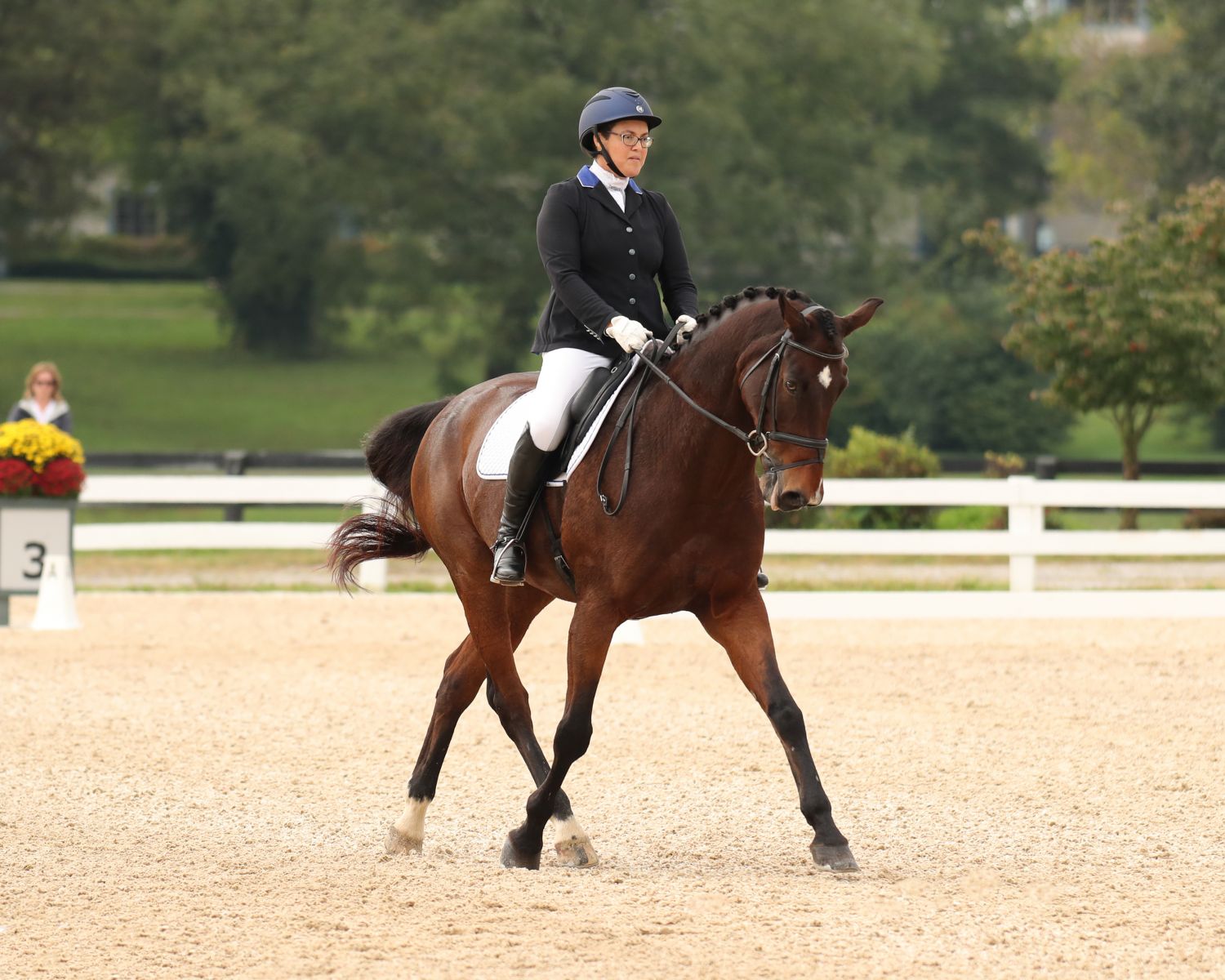 Stacy was preparing for the USDF Region 2 Dressage Championships, where she would eventually go on to finish in the top 10 in a big Third Level division, earning the scores she needed for her USDF bronze medal as well as earning a Fourth Level score towards her silver medal. Stacy says the plan is to keep her lease on Glen through 2022 to work more on Fourth Level.

It’s been the opportunity of a lifetime for Stacy, who says she was unaccustomed to such a well-tuned horse. “I’ve learned so much already from him,” she explained. “Just feeling the response to the aids has made me feel like I’m improving in how I’m giving them. It’s the feeling of getting it right, so you take that and you use it for a horse that isn’t quite as experienced.” 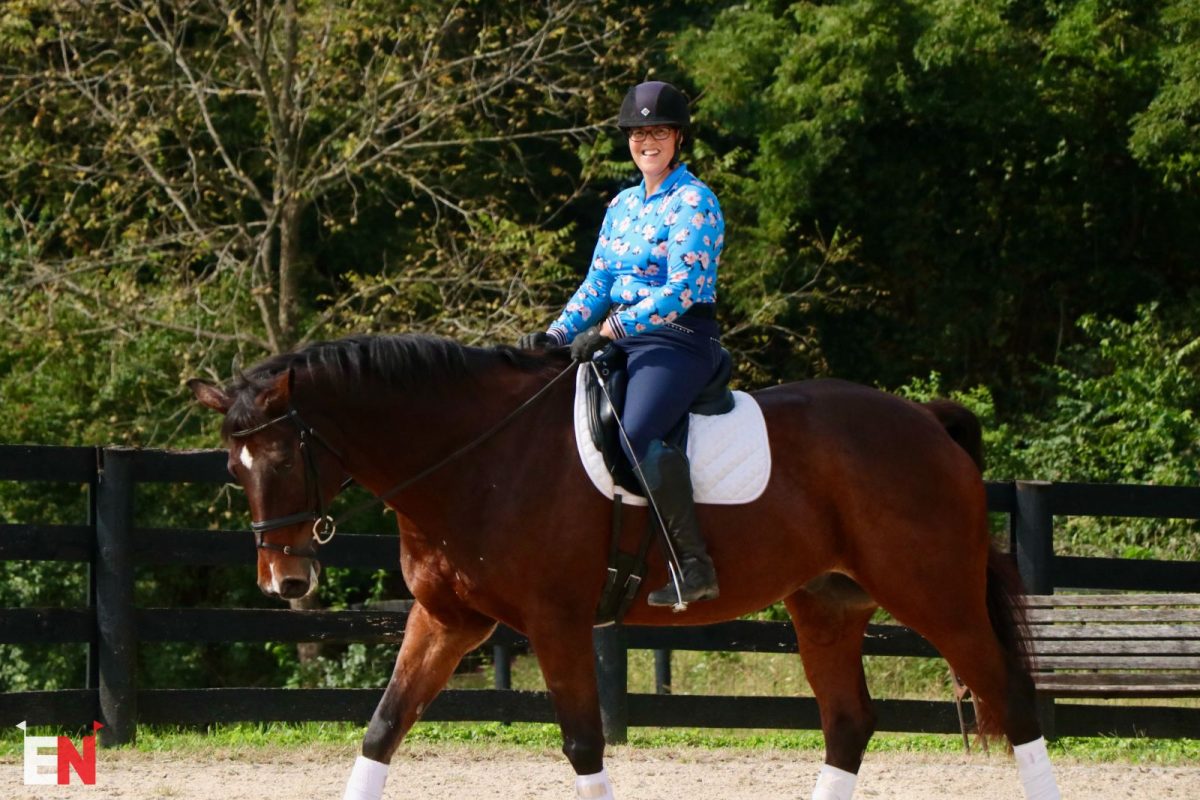 Horses like Glen are endless wells of knowledge, and Kelsie counts herself lucky as one of his students. Knowing how much she’d learned from him, she knew Stacy was in for a similar experience. “I was so incredibly lucky for the opportunities that Clark gave me, and if Glen can give someone else that opportunity I don’t see why he wouldn’t.”

Kelsie will still take Glen for a spin when she’s home for periods of time, and she also leases Glen’s other former partner, Universe, with whom she competes in show jumping. Between Kelsie and Stacy, these two incredibly accomplished horses have found an ideal retirement. “It’s just been the best experience,” Stacy mused as we wandered back toward the barn. “I can’t believe I get to learn from him.”

Leave your horse a 5-star review to win!

2021 is coming to an end. It is time to take a look back at how the year has gone. If you had to leave your horse a review, would it be 5 stars? Leave us a review about your horse for a chance to win custom stickers with your horse’s name on them. Be creative!

Winners will be drawn in early January.