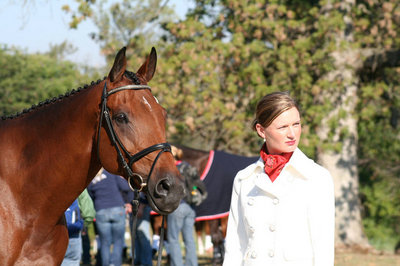 It’s been nearly two years since Stephanie Rhodes-Bosch’s longtime partner, Port Authority, has competed at the upper levels, but he’s far from retired in a field. Some horses — the ones that are truly meant to teach — end their upper-level career and go on to become lower-level masters, and that’s exactly what Port Authority has done.

Prior to his retirement, Port Authority, or “Ollie”, enjoyed a storied career with Steph in the irons. Ollie was Stephanie’s Young Rider mount in 2008 and the pair moved up the three-star level successfully, finishing outside of the top 15 just once. In 2010, Stephanie was selected to the Canadian WEG team and placed ninth individually.

Unfortunately, Ollie then sustained an injury and was eventually retired after Stephanie attempted to bring him back to competition. “We had brought him back (in 2013) and had plans to step back up to Advanced, but we were told that his suspensory wouldn’t hold up,” Stephanie said. “He flexed really well, it just showed up on the ultrasound and we couldn’t risk it.”

So Stephanie made the difficult decision to retire her partner on which she had had so much success. Stephanie then suffered another terrible blow, suddenly losing her promising young horse, Seahawk.

“Once we lost Seahawk, reality kind of set in,” Stephanie said. “At some point, I needed to treat this as a business and stop hemorrhaging money. So it was a natural transition to start to look for something for Ollie to do to take some of the strain off.”

Enter Margaret Nelson, who had been looking for a horse on which to learn. Through mutual friends, Stephanie and Margaret came to an agreement for the lease of Ollie, who got along swimmingly with his new rider.

“It’s great for both Ollie and Margaret,” Stephanie said. “He’s super quiet and generally easy to ride, but he still makes you work correctly to put him together. When she rides him properly, he rewards her with really nice work. At the same time, he’s quiet and she can go on trail rides or throw him on the trailer easily.” 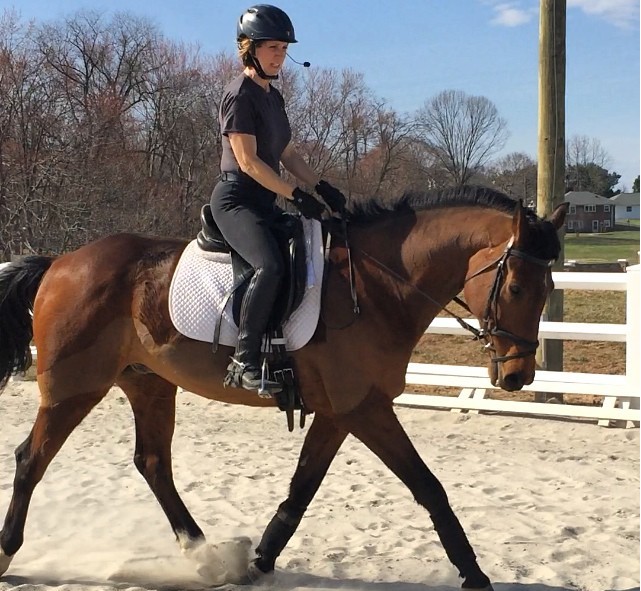 Margaret’s primary focus is on dressage, which Ollie has had success in throughout his career. “I had been taking lessons at a riding school,” Margaret recalled. “But I felt like I wanted more riding time. My cousin knew that Steph was looking for someone to ride Ollie, and as soon as I rode him I just knew it would work out. It was kind of a love at first sight.”

The benefit of riding Ollie, who is well schooled and experienced, is that as Margaret progresses, Ollie can step up and present new challenges and lessons for her. It’s an evolving process, and Margaret can continue to learn as time goes on. “Ollie’s been a really good teacher,” Margaret said. “He won’t give me anything I don’t ask for.”

Stephanie couldn’t be happier with how everything has worked out. “It’s a very simple situation,” she explained. “I needed to move forward, and Margaret loves him and takes great care of him. She’s been a great find.”

Stephanie has set a goal for Margaret to earn her USDF bronze medal aboard Ollie, a goal she believes is perfectly attainable. “She’s been doing eventing dressage tests, but we’re going to progress to doing USDF tests and working towards the medals. I think it’s a perfectly attainable goal.”

As for Ollie, who is now 17, he loves having a job and another person to take care of. “I’ve had him since he was five,” Stephanie said. “He’s always been the same kind of horse, really quiet and easy to be around. I’m happy that he’s found someone to take care of now, it’s perfect for him.”