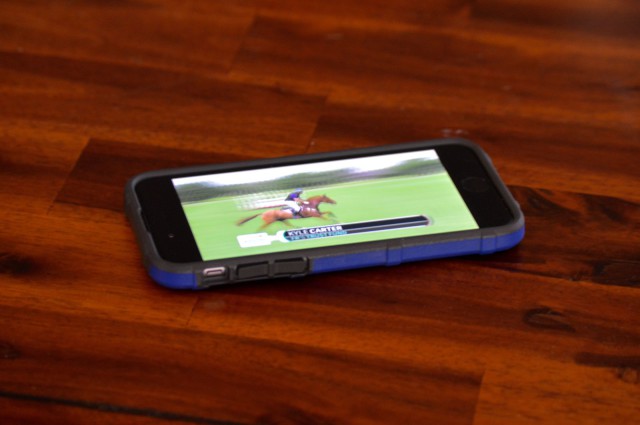 Well, technically it was in Wellington, Florida, of course, but thanks to the excellent livestream coverage from Chronicle of the Horse eventing fans were able to watch from around the globe. Commentator Dom Schramm was again very interactive with the livestream viewers via social media and asked folks to tweet in with where they were watching and what they were doing using #EventingShowcase.

Of course, there were viewers from right here in the USA and across North America, myself included:

Watching from Massachusetts! Slight difference between what’s on the screen vs outside #EventingShowcase pic.twitter.com/ZrZ96QnBxP

#eventingshowcase @DomSchramm watching from Gunnison, Colorado -5 degrees here! Wishing I was there with you!

@DomSchramm keeping us entertained for the #EventingShowcase down here in New Orleans for carnival season! Rooting for Joe Meyer!!

#EventingShowcase Enjoying the best of both worlds from Ottawa, Canada. Streaming the event at Wellington and hockey on the tele!

And we had viewers from overseas:

Watching the sunny #EventingShowcase from rainy UK and wishing I was back in florida! — bayalltheway (@bayallthewayy) February 6, 2016

@DomSchramm #EventingShowcase greetings from Denmark, Europe. Great show reminding us the season is not far away. Thanks!

We had people splitting their time and getting a little work done while viewing:

Enjoying the live stream while I work on yearbook pages. Thanks! #EventingShowcase pic.twitter.com/mfMlbd1lN7

Best part of working at a horse store is we can watch #EventingShowcase and their awesome LiveStream!!!! pic.twitter.com/5HrGGqmdEJ

Or, well, at least tried to get some work done:

@DomSchramm I haven’t gotten a bit of housework done today. Too busy watching #EventingShowcase. Broke down and cracked open a beer as well.

As well as perhaps the youngest viewer:

Huge congratulations to Boyd Martin for making it two for two and to all the competitors for the grand display of amazing riding and horsemanship this weekend. Once again, thank you to the Chronicle of the Horse for virtually transporting us all to sunny Florida and to the Wellington Eventing Showcase organizers for such an amazing event. Eventing fans around the world are most appreciative:

LOVED watching the #EventingShowcase livestream today~Great commentary from @DomSchramm ~ Looking forward to an even bigger event next year!

#EventingShowcase thanks for a fab event! Thanks for the livestream! Great riding!! ❤️ eventing

#EventingShowcase Such a fantastic event. I’ll be watching every year they have it and the livestream

#EventingShowcase – thanks to all who made it possible for us to watch this competition via live streaming.

#EventingShowcase so fun to watch! Thanks so much for the great coverage online!

Where did you watch from? Let us know in the comments!