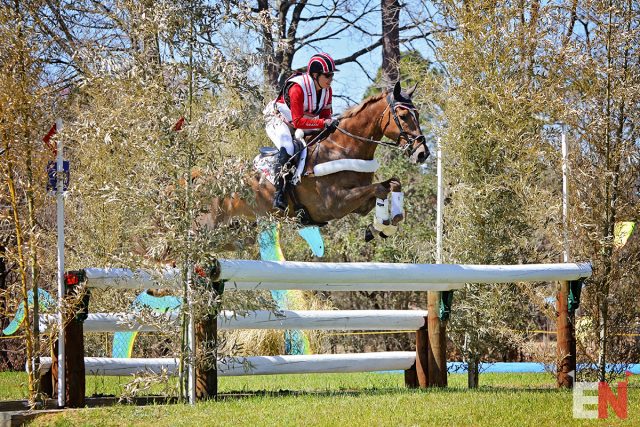 Lisa Marie Fergusson and Honor Me were one of four pairs who wore Hylofit heart-rate monitors on the Carolina CCI4*-S cross country course. Photo by Jenni Autry.

Four horses and riders wore Hylofit heart-rate monitors during cross country in the CCI4*-S at the Cloud 11 ~ Gavilan North Carolina International, and their heart rates, distance and speed were shown in real-time on the EQSportsNet live stream.

Carolina marked the first time Hylofit was used during a competition, and Kate Motley, co-founder of the company, said she hopes using the technology at events will become a regular occurrence.

“The more people ride, the more we can aggregate data and start to provide comparative analytics for riders to track course results and understand their own performance as it compares to the larger field,” she said.

Doug Payne, Clayton Fredericks and Lisa Marie Fergusson all wore Hylofit heart-rate monitors at Carolina. You can watch the footage below.

Let’s take a look at the data at the same points on Ian Stark’s CCI4*-S cross country course — jumping over fence 7C at the influential coffin combination and at fence 21, the last jump.

Doug had two rides in the CCI4*-S and set out first with Quantum Leap, a 7-year-old RPSI gelding (Quite Capitol X Report to Sloopy xx, by Corporate Report xx) he owns with Susan Drillock. Quantum Leap only just stepped up to the Advanced level at Pine Top last month and made his CCI4*-S debut at Carolina, adding 3.2 time penalties to finish 20th. 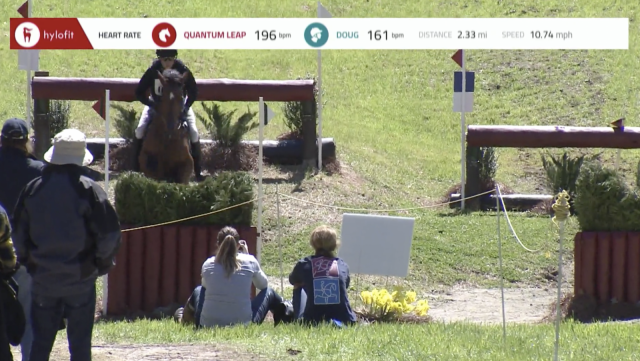 After traveling a further 1 1/2 miles to the finish, Doug and Quantum Leap’s heart rates both rose a further 20 bpm. 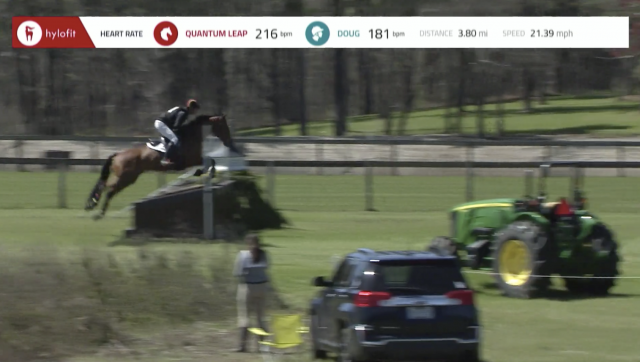 Let’s compare that to Doug’s seasoned five-star partner Vandiver, a 14-year-old Trakehner (Windfall II X Visions of Grandeur, by Mystic Replica xx) owned by Debi Crowley. Doug and Vandiver won Carolina last year as the only pair to make the optimum time. With this run serving as the horse’s final prep for the Land Rover Kentucky Three-Day Event, these two set out of the start box on a mission.

Since Doug set out with the goal of catching the time, do you think that means we could expect his heart rate to be higher than it was while riding Quantum Leap?

It was! Doug’s heart rate was 168 bpm at the coffin, 7 bpm higher than it was with Quantum Leap. (If you compare the speeds between the two horses, Vandiver also went through the combination at a faster pace.) 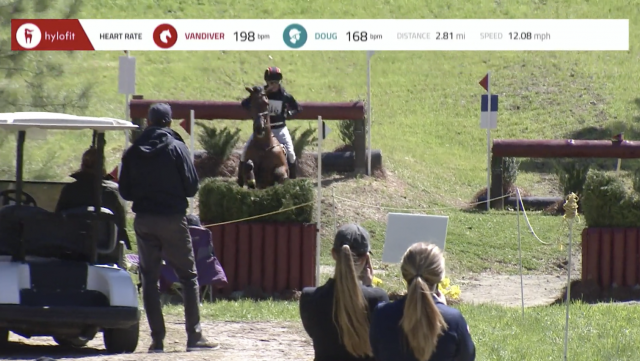 At the end of the course, both Doug and Vandiver’s heart rates both rose by about 20 bpm, with Doug’s heart rate at 4 bpm higher than it was with Quantum Leap at the finish. Vandiver finished 4 seconds inside the time for fourth place — mission accomplished and on to Kentucky. (Click here if you missed the Kentucky entry list.) 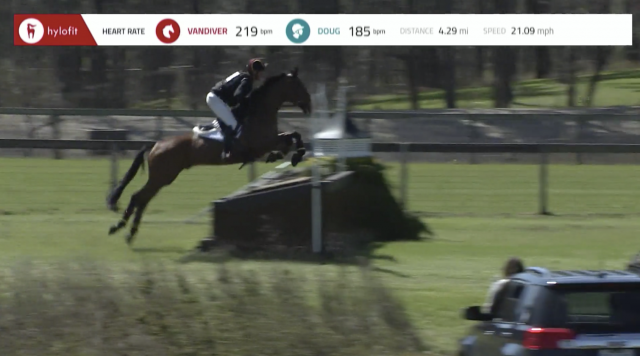 Next up, let’s look at Lisa Marie Fergusson and her own Honor Me, a 13-year-old Welsh Sport Horse gelding (Brynarian Brenin X Dream Contessa xx, by Royal Chocolate xx) who represented Canada at the 2018 FEI World Equestrian Games. These two are well known as a speedy cross country duo and are also aiming for Kentucky, so they set out of the start box to beat the clock.

Honor Me had a higher rate rate at the coffin than Doug’s horses — over 10 bpm higher — but Lisa Marie’s heart rate was just 121 bpm — over 60 bpm lower than Doug’s. 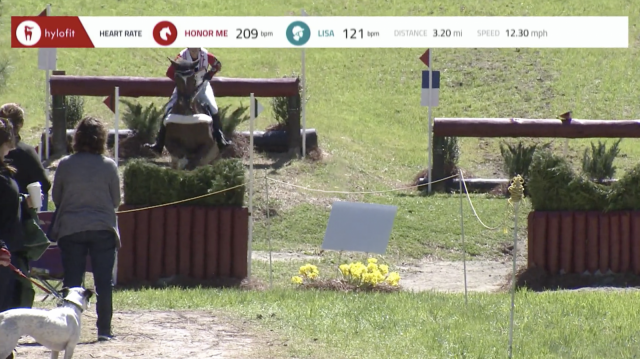 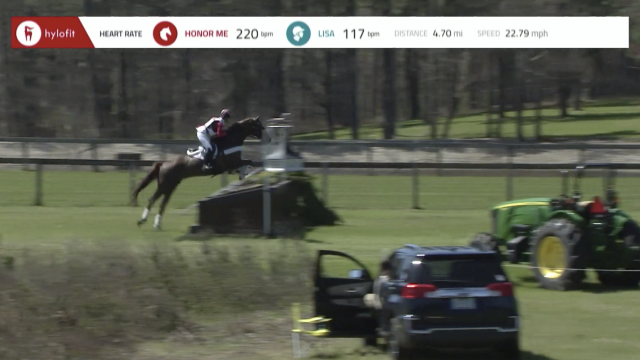 Next up, let’s look at Clayton Fredericks and Luksor, a 17-year-old Polish gelding (Efez X Lektura, by Farnik) owned by Lily and Mary Beth Geelan. Luksor stepped up to the Advanced level last year with Lily before she went off to college, and Clayton has had the ride since last fall. The horse averaged 13.6 time penalties in his previous two runs at CCI4*-S level, and Clayton set out of the start box with a steady clear in mind.

Clayton’s heart rate at the coffin was 120 bpm, 1 bpm lower that Lisa Marie at the same point on course. Luksor’s heart rate of 198 bpm was the second lowest of the four horses — just 2 bpm higher than Quantum Leap’s. 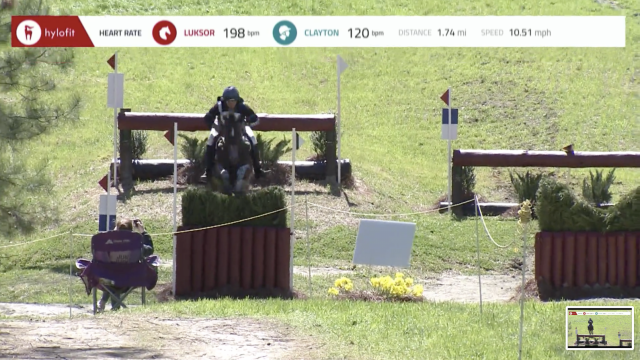 Like Lisa Marie, Clayton’s heart rate also dropped throughout the course, falling a further 3 bpm by the final fence to match her at 117 bpm — but keep in mind that Lisa Marie was going for time and Clayton wasn’t. Luksor’s heart rate rose 23 bpm by the end of the course to 221 bpm. Clayton added 3.2 time penalties for 15th place.

Interestingly, while Clayton tied with Lisa Marie for the lowest heart rate at the finish of cross country, his heart rate spiked to nearly 180 bpm in dressage. You can watch his test with Luksor here. 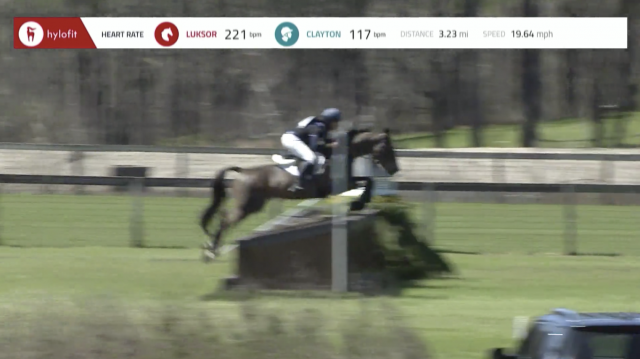 You can watch more of the footage showing the Hylofit heart-rate monitor in action at Carolina on Hylofit’s YouTube Channel. Notice the difference in heart rate across the three disciplines — riders seem to be working much harder in dressage.

If you think studying heart rate is fascinating, you can track your own fitness journey with your horse this season using Hylofit — it’s like Fitbit for your horse and so easy to use. Here’s a full guide on how to get started. Go Eventing.