That’s a wrap on cross country day at the MARS EQUESTRIAN Bromont Three-Day Event! With six FEI divisions running cross country, the chinchillas have been frantically transcribing interviews to bring you comments from the leaders. Click here to read the full report on the feature CCI4*-L class; the winner will take home the Todd Sandler Challenge tomorrow. Then read on for what the rest of our leaders had to say. 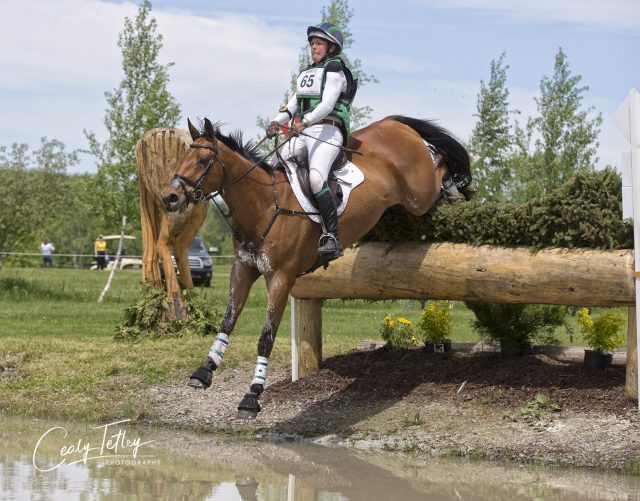 Kylie Lyman and Joan Nichols’ Da Vinci Code burst back onto the international scene with a bang, storming around his first FEI track since Bromont in 2017 to lead the CCI3*-L on his dressage score of 28.3. “Davinci,” a 12-year-old Irish Sport Horse (Master Imp X Clovers Apollo, by Clover Hill), sustained a soft tissue injury in his last appearance at Bromont and has been slowly making his comeback ever since.

“I don’t think I’ve ever had as much fun,” Kylie said. “He was literally foot perfect. Anytime I asked him to go forward or come back, he jumped everything in a great rhythm and a great shape. I think he really enjoyed himself. It’s been a long time coming back from injury, and it’s amazing to have him back so confident and proud of himself. He genuinely enjoyed himself. It was a special day even though it was a step back and a lower level. We didn’t know if he would come back at all, so it’s definitely emotional.”

It’s also an emotional day for Kylie and her team because they are still reeling from the loss of Cooley Ice, who they lost two weeks ago after a battle with colic. Kylie said she cried “happy tears” today mixed with a bit of sadness — elation for Da Vinci making his comeback in such fantastic form, and heartbreak for the loss of “Eli.”

“It’s nice to have these days that are so special,” Kylie said, “and to still be able to appreciate all of that and have the people around you who enjoy it, too.” We couldn’t have said it better.

Looking to the rest of the CCI3*-L leaderboard, Allie Knowles and Business Class, a 9-year-old Irish Sport Horse gelding (Harlequin du Carel X Modela, by Quick Star) owned by Katherine O’Brien, also made the time to move up to second place on 28.7.

Click here to view full scores in the CCI3*-L after cross country. 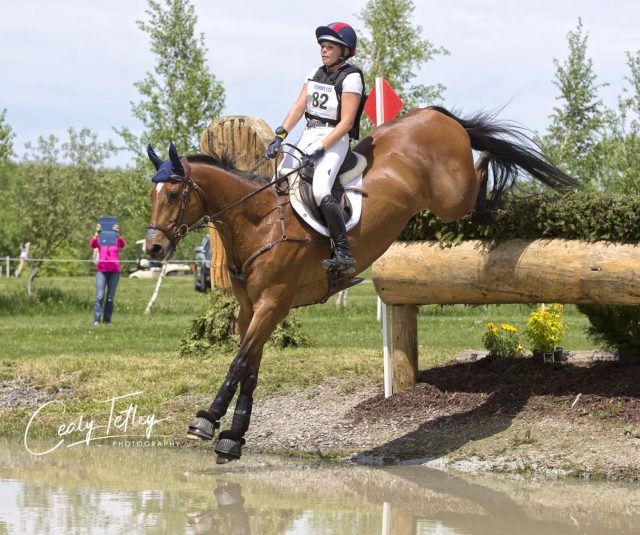 Looking to the CCIU253*-L, Alyssa Phillips and Oskar, a 10-year-old Holsteiner gelding (Coriando X Nicole, by Marlo) owned by Julia Phillips, added 1.6 time penalties but still held their overnight lead on a score of 27.3.

Alyssa is competing on Leslie Law’s team for the USEF/USET Foundation North American Futures Team Challenge. Erik Duvander’s team took the lead on 89.5 today with all four of its riders delivering clear rounds. Leslie’s team sits second on 114.2 after Cosby Green and Highly Suspicious did not complete.

“I had a lot of input from the other girls on the team and Leslie. Right before I headed up to go to the start box, Cosby (Green) had just gotten eliminated, and Leslie said, ‘Go out and get it done and get a clear round.’

“Everything really rode to plan and how we walked it. My biggest concern was not knowing what type of horse I would have at the end, just because he’s not that experienced at long formats, and I haven’t done that many myself. There was a lot of work to do at the beginning, and the ground did get a little bit heavy in places, but he was a lot more adjustable and rideable than I ever expected him to be.”

Canada’s Shelby Brost and her own Crimson, who participated in the inaugural Bromont Rising Program this week, were one of five pairs to catch the optimum time, which moved them up to third place on their dressage score of 33.6.

Click here to view full scores in the CCIU253*-L after cross country. 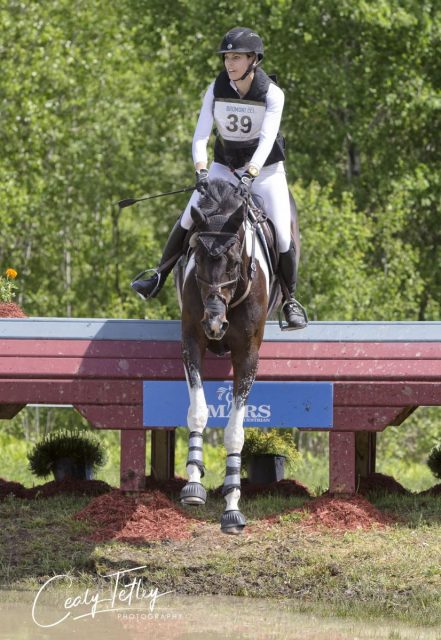 Canadian adult amateur Sondra Shantz moved up to take the CCI2*-L lead with her colorful mare Unique one year after being in labor with her son, Noah. She gave birth to him on June 9, 2018, and having a year off gave her time to “have the time off and reflect on what I needed to work on.”

Sondra bought “Nikki,” a flashy skewbald KWPN/Thoroughbred mare (Fuhler X Abydos Maya, by Judge TC) bred in Canada by Tonya Cummins, as a 2-year-old and produced her through the levels.

“When I came back this year, I wanted to make sure she was really fit and get more coaching. I started training with Kendal Lehari, and I started working on my fitness too with a personal trainer. I found those things made a huge difference in our mental game and confidence,” Sondra said.

Bobby Meyerhoff and The Donovan Group’s Lumumba, an 8-year-old Mecklenburg mare (Levisonn X Lamara, by Lamarc) moved to third on 30.6 in her debut at the level.

Click here to view full scores in the CCI2*-L after cross country. 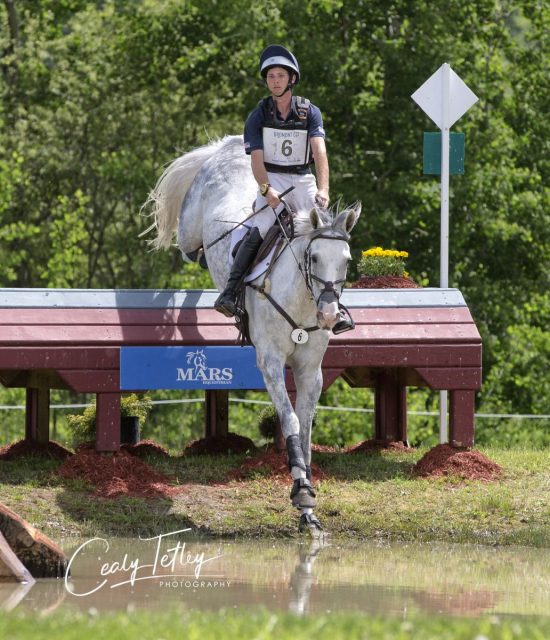 Magic Mike Pendleton defended the lead on 30.3 in the CCIU252*-L with a speedy round aboard Carlsburg, a 7-year-old Irish Sport Horse (Puissance X Flame and Passion, by Cruising) owned by Boyd Martin and Steve Blauner.

“I thought I wasn’t going to get home in time, so I went a little fast in the back. He was so good everywhere. He’s such a champion. If you ride him halfway, right he’s going to jump the jumps. Hopefully he jumps all the sticks tomorrow.”

(Mike also piloted Steady Eddie, Boyd’s former five-star partner owned by George and Gretchen Wintersteen, Pierre Colin and Denise Lahey, to a super clear in his CCI3*-L debut to sit in fourth overnight in the under-25 division. Good man, Mikey!)

Alice Roosevelt and Get It Together, a 10-year-old Irish Sport Horse (Deanes San Ciro Hit X The Lapdancer, by Crosstown Dancer) owned by Simon Roosevelt, caught the time to remain in second on 32.0.

Gabrielle Hutchinson and Straight Moonshine, a 7-year-old Thoroughbred (Malibu Moonshine X Straight Blues, by Straight Man), jumped clear in their debut at the level to move up to third on 34.0.

Click here to view full scores in the CCIU252*-L after cross country. 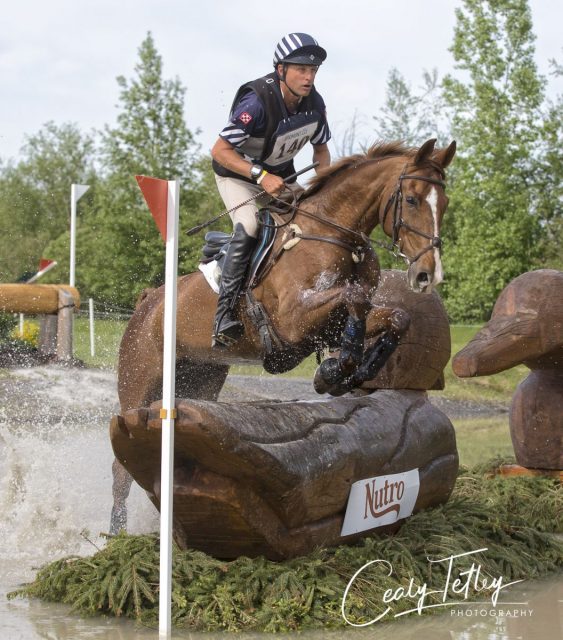 Last but certainly not least, Boyd Martin and Windurra LLC’s Barry, who is out of Colleen Loach’s former four-star partner Freespirit, added 2.4 time penalties to move up to lead the CCI3*-S on 30.6.

“He’s taken awhile to click into gear. He’s still a bit of a spook but has a lot of quality. I think he just needs exposure to event after event after event. I decided not to do a long format until the end of the year on him, as he’s already qualified for the next step. I’m trying to put as many miles as I can on him to prepare him for next year.”

Christina Henriksen and JTH Zest, her own 8-year-old British-bred mare ( Zamboucca X Maybee Baybee, by Mayhill), caught the time to move from seventh up to second on 30.9.

Woods Baughman and C’est La Vie 135, an 11-year-old Hanoverian gelding (Contendro I X Anette, by Aarking xx) owned by James and Kim Baughman, moved from equal 10th up to third on 31.7 thanks to a speedy, clear cross country round.

If you’re still reading at this point, you deserve a medal. Tomorrow’s final horse inspection starts tomorrow at 8 a.m. in the following order: CCIU253*-L, CCI2*-L, CCIU253*-L, CCI3*-L, CCI3*-S, CCI4*-L. Show jumping starts at 9:30 a.m. and will run in the same order. Thank you for following along with EN’s coverage. Go Eventing. 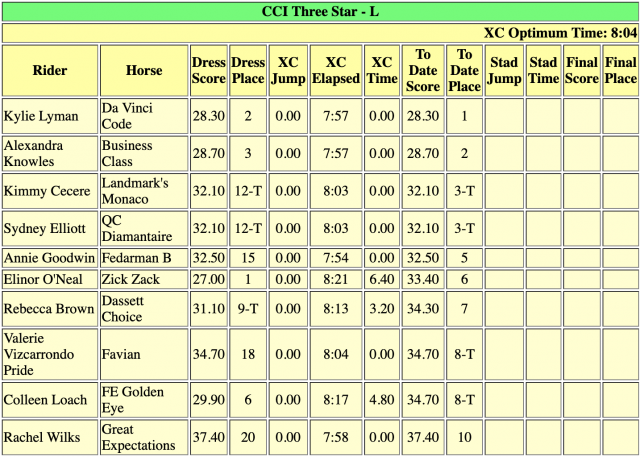 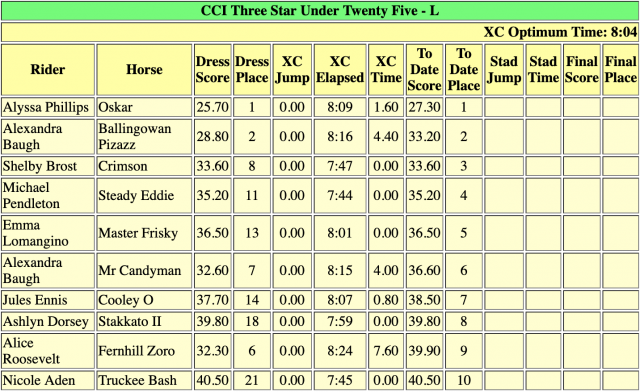 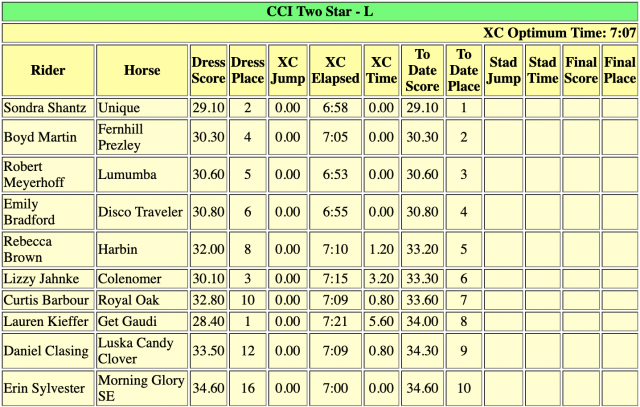 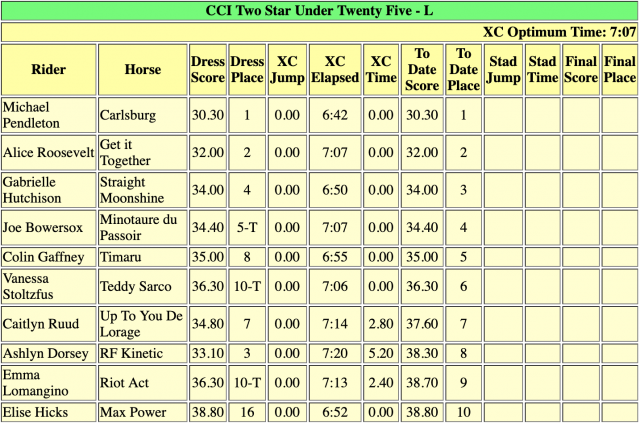 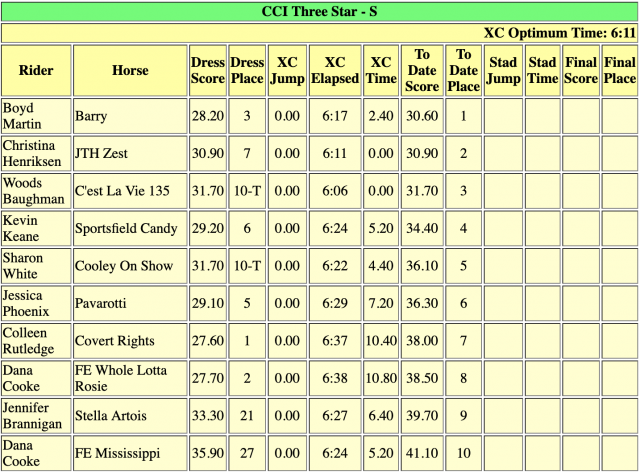