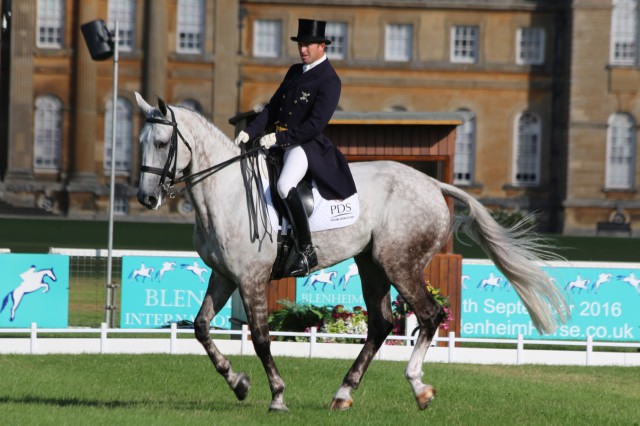 Friday morning at Blenheim dawned much like Thursday afternoon — bright and very breezy which although it makes dressage somewhat more complicated with flapping flags and rattling marquees, is an improvement on the forecast rain we were supposed to have.

Will Faudree and the gorgeous grey Pfun are our only U.S. representative in the CCI3* today and they were fourth in the arena this morning. To look at this horse is to want to take him home with you — his earnest expression, pricked ears and willingness to try, and did I already mention he’s grey and gorgeous?

Only 9 years old Pfun went into the arena and did a very workmanlike test with no glaring errors except for dropping down to a trot in the second change. Afterwards Will reported that he was delighted with him, and that he’s just the same to ride as he looks.

“I was really happy with him; it’s the first time he’s been in an atmosphere like this and the atmosphere actually always helps this horse so I never do the ring familiarisation with him. I went in there and he did spook at the judge’s stand at first and then he was fine. As the test went on I could have used a bit more atmosphere even to help, I needed the crowd to start clapping to get him excited but for where he is it’s a big ask for him to put in a consistent, steady test. I’m happy with it. He’s just a really fun horse to be around, he’s very easy to be around, he’s a big teddy bear!” 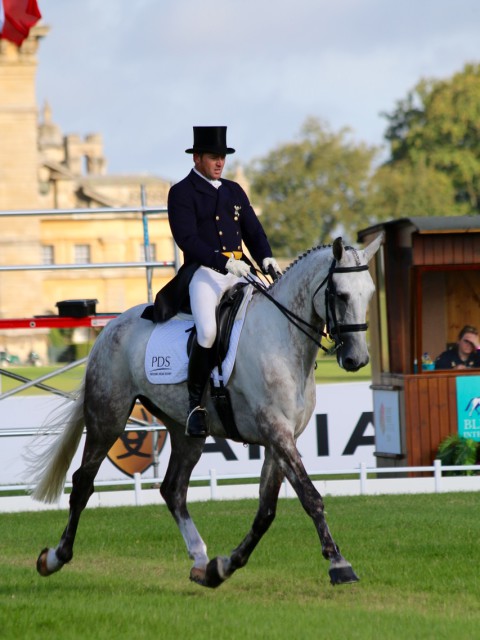 Bobby Costello, who’s here watching, originally found the horse as a youngster, I think in Ireland, and competed him at the lower levels under the name Fernhill Teddy Two Two.

Will was glad to have had a practice run on grass a couple of weeks ago, but wondered if he’d chosen the wrong studs for this morning.

“We rode on grass at Chatt Hills two weeks ago which was actually a huge help,” he said. “I did go with a bit bigger studs in here today because typically this ring can be a bit slick which worked a little bit against me; in that second change when I was going to ask for it he just felt like he got stuck so I don’t think he was used to it, but he’s just a 9 year old horse and hopefully this isn’t his last time on grass.” 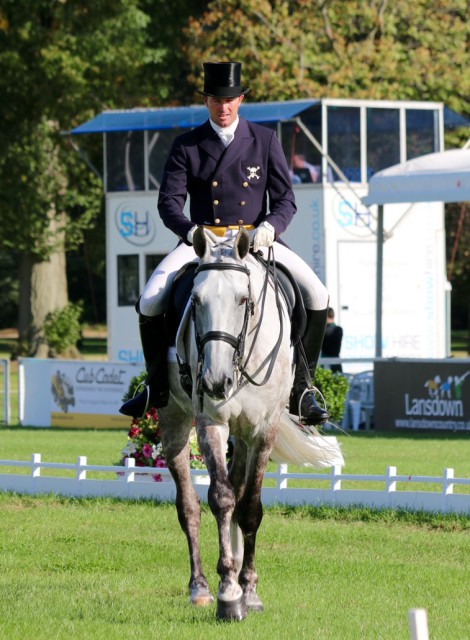 Will and Pfun scored 50.6 which places them about midway down the pack at this point, but with everything to play for on cross country day.

We still have a couple to look forward to this afternoon that might shake up the leaderboard. I’ll be watching Pippa Funnell and Aoife Clark carefully and bringing you a wrap up of the day later. In the meantime, enjoy your Friday and Go Eventing!