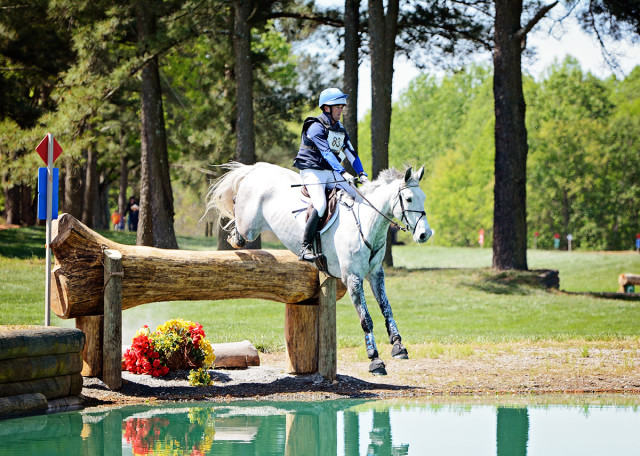 Will Faudree and Pfun at The Fork 2016. Photo by Jenni Autry.

Fair Hill kicked off its eventing season this weekend with their spring CIC and Horse Trials. Will Faudree and Pfun, a 9-year-old Irish Sport Horse gelding owned by Jennifer Mosing and Sterling Silver Stables, topped the CIC3* division, moving up from eighth place out of 18 after dressage. They posted one of only three double clear show jumping rounds to move into third. Significant time penalties were common throughout the class as the rain poured down, but Will and Pfun had the fastest round with 5.6 penalties to secure the win.

Will also finished fourth with Caeleste, a 9-year-old German Sport Horse mare making her first CIC3* appearance. Also owned by Jennifer Mosing and Sterling Silver Stables, Caeleste placed sixth after dressage with a 51.9, followed by a clear show jumping round with two time penalties to move into fourth, a position they maintained after incurring time penalties on cross country.

Ryan Wood and Summit Sporthorses, Ltd.’s 10-year-old Oldenburg gelding Powell were second after dressage on a 47.7. They moved into first despite a rail in show jumping, but 10.8 time penalties resulted in a second place finish overall. Colleen Loach and Peter Barry’s 12-year-old Selle Francais Qorry Blue D’Argouges added one rail and 13.6 time penalties to their dressage score of 51.1 to finish third.

Jan Byyny and her and Richard and Jo Ellen Byyny’s beautiful grey mare Urrem won the CIC2*. The 8-year-old Selle Francais added 6.8 time penalties on cross country – the fastest round in the class – to move up from fifth to finish on a 56.0. 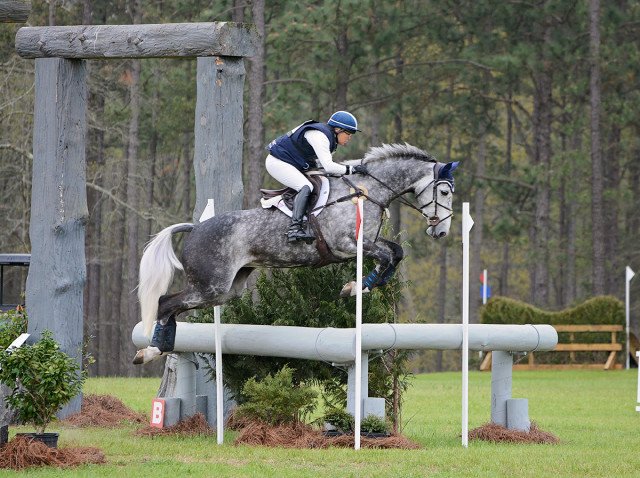 Peter Barry and Kalle 86, his own 10-year-old Hanoverian gelding, were second after the first two phases, and they held their position after a clear cross country with 11.2 time penalties. Philippa Humphreys and her and Peter Humphrey’s 9-year-old Irish Sport Horse Master Eli round out the top three with a 58.9, adding 12.8 cross country time penalties to their dressage score of 46.1 and their first CIC2* completion as a pair.

Continuing with a cracking weekend, Jan Byyny won the CIC* riding Duke of Diamond, an 8-year-old Oldenburg gelding owned by Jane Musselman. They led the 35-horse division from start to finish, adding only four penalties from a rail in show jumping and crossing the finish in the final phase exactly on the optimum time.

Fresh off a one-star win at Carolina International, 17-year-old Katie Lichten and Harold Lichten’s 10-year-old Hanoverian gelding RF Luminati moved up from sixth to finish second on their dressage score of 49.9. Jenny Caras and her 7-year-old Irish Sport Horse Fernhill Full Throttle were seventh on a 49.6 following dressage. A double clear show jump round moved them into fourth place, and they gained another placing with a perfect round across country.

David Taylor and Serendipity had a fall at the 8th fence on cross country resulting in Mandatory Retirement. Horse and rider are reportedly sore but otherwise okay.

In the Advanced division, Ryan Wood and Woodstock Bennett, a 9-year-old Irish Sport Horse owned by Ryan and Curran Simpson, won with 8.8 time penalties added to their initial score of 35.3 to move up from third. Matthew Brown and Blossom Creek Foundation’s Talking Point BCF led after dressage on a 31.6 in the 9-year-old Irish Sport Horse’s first Advanced attempt. A rail and 18.4 time penalties dropped them back to second place. Madeline Backus and her own 15-year-old Anglo-Trakehner mare P.S. Arianna finished third, adding a rail and 17.6 time penalties to their dressage score of 40.3. 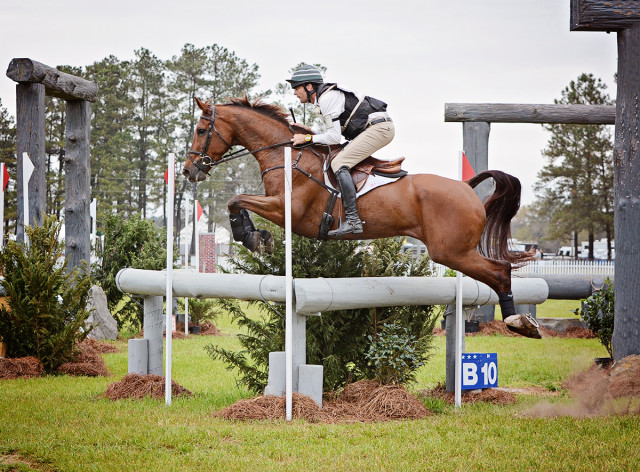 In the Intermediate-A division, Jennie Brannigan led from the start with her and Elsbeth Battel’s 8-year-old Holsteiner/Thoroughbred mare. After winning the dressage on 31.0, Jennie made plans to take it slow on cross country. They incurred 11.2 time penalties, but it wasn’t enough to drop them out of the top spot.

Molly Kinnamon and her own American Warmblood The Diesel Boy won Intermediate-B, jumping clear in show jumping and adding 10.4 time penalties to finish on 40.8. In second was Erin Sylvester and Marnie Kelly’s Campground, moving all the way up from 13th after dressage to second with two fast, clear rounds. Kevin Keane and his own Fernhill Flutter were leading after the first phase on a 27.7. One rail dropped them to third, but they held that position despite 11.6 cross country time penalties.

The Fair Hill Preliminary winners are Courtney Cooper and Neal Camen’s R Star, leading from start to finish on a remarkable 20.0 in division A, Haley Rosenberg and Sandra Holden’s Evil Munchkin, finishing on 30.4 in division B, and Dom Schramm and Bolytair, owned by Janet, Kurt and and Connor Giesselman, adding nothing to their dressage score of 22 to top division C.

Several Rolex-bound combinations got in last minute practice in a four-star Combined Test. Matthew Brown and Blossom Creek Foundation’s Super Socks BCF scored a 53.3 and added one rail in show jumping to top the division on 57.3. Lisa Marie Fergusson and her own Honor Me were second, adding no show jumping penalties to their dressage score of 59.3. Lillian Heard and her own LCC Barnaby added on 1 time penalty to their dressage of 58.5 for third.

The Training divisions wrap up the competition today. Click here for final results and live scores. 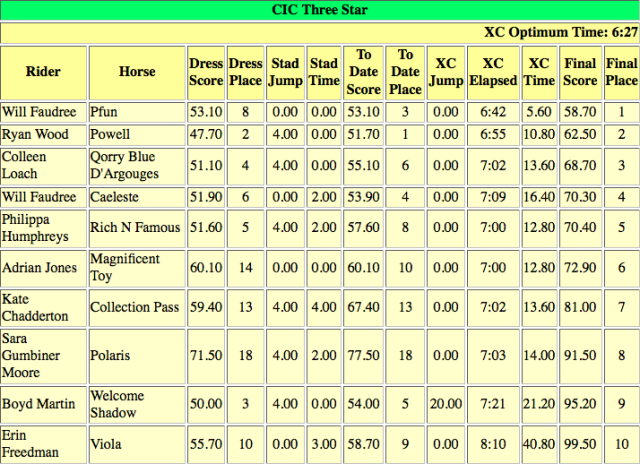 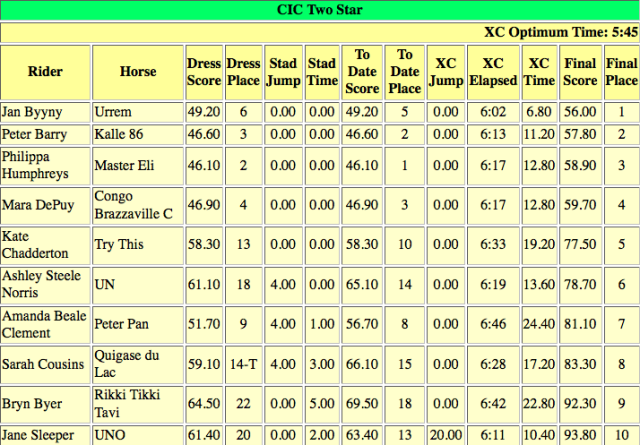 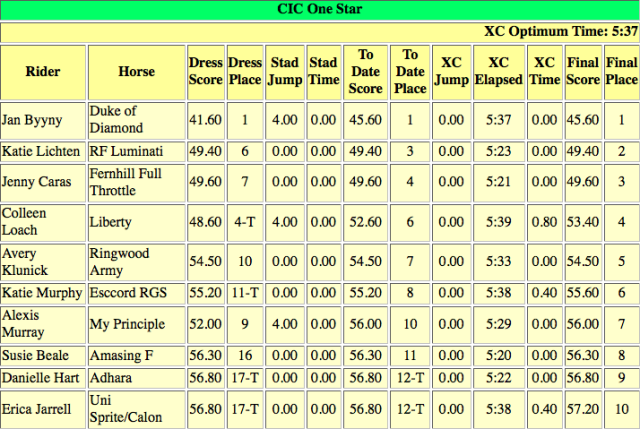