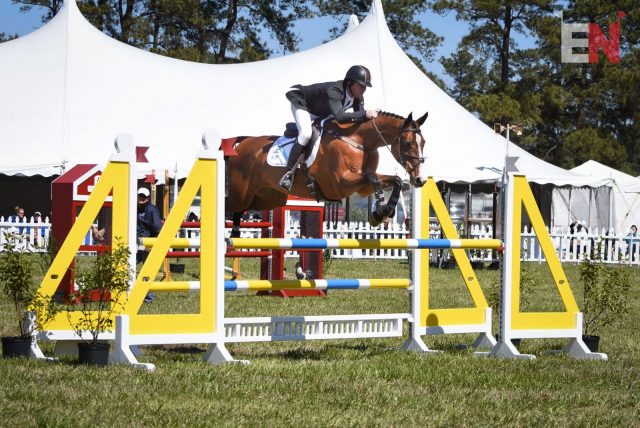 Will Faudree is dominating both the CIC2* and CIC1* at the Cloud 11~Gavilan North LLC Carolina International, leading the two-star with Jennifer Mosing’s Caeleste after show jumping and the one-star with Sarah Pyne’s Quintessential after cross country here in Raeford, North Carolina.

Nearly half of the CIC2* field — 35 of the 75 starters — jumped clear over Marc Donovan’s show jumping course to give us a 46.7% clear rate, as opposed to the more paltry 25% clear rate for the CIC3* field.

Caeleste, an 11-year-old Holsteiner mare (Contender X Happygolucky, by Lucky Lionell), is making her comeback after a lengthy period of time off recovering from bowing both of her front tendons. “Mouse” last competed at international level in 2016 and sat in second place after yesterday’s dressage on 27.4. She jumped a beautiful clear show jumping round today to take the lead after dressage leaders Clayton Fredericks and FE Bowman dropped three poles.

“She’s so happy that she’s back. She’s such a fierce competitor,” Will said. “We joke in the barn and call her Katniss Everdeen because she is a girl on fire. I’m so skeptical to say what’s next. Every round I get to do on her at this point is a bonus because I didn’t think I would get another chance.”

Will credited Dr. Meghann Lustgarten of Friendship Mobile Vet Imaging, as well as Dr. Lynn Gomes of Performance Equine and U.S. team vet Dr. Susan Johns for developing a rehabilitation plan for Mouse that allowed her to ultimately return to competing.

“I learned a valuable lesson from it: time is really the best thing,” Will said. “It’s a really humbling experience because she is such a competitor and such a fighter. She’s back here in part because of that, but largely because she wants to be back.” 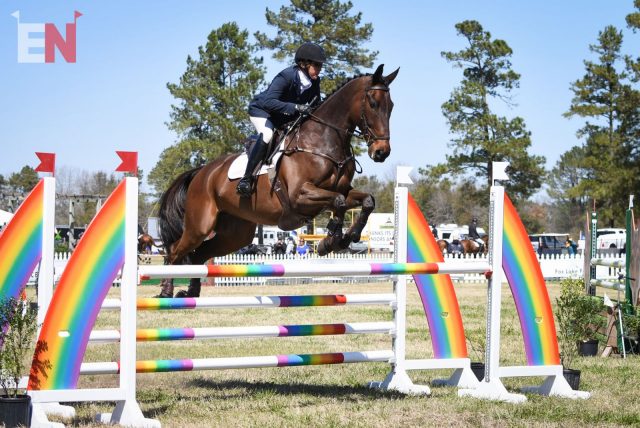 Courtney Cooper and Who’s A Star. Photo by Shelby Allen.

Looking to the rest of the CIC2* leaderboard, Courtney Cooper and Who’s A Star, her homebred 15-year-old Irish/New Zealand Thoroughbred (Aberjack X Heavenly Star, by I’m A Star), jumped clear and inside the time to move from sixth up to second place in the CIC2* on their dressage score of 30.0.

Hallie Coon and Shanon Baker’s Lansdownne, a 12-year-old Thoroughbred (Partner’s Hero X Alpine Aster, by Badger Land), also left the poles in the cups to move up from seventh after dressage to third on 31.3. 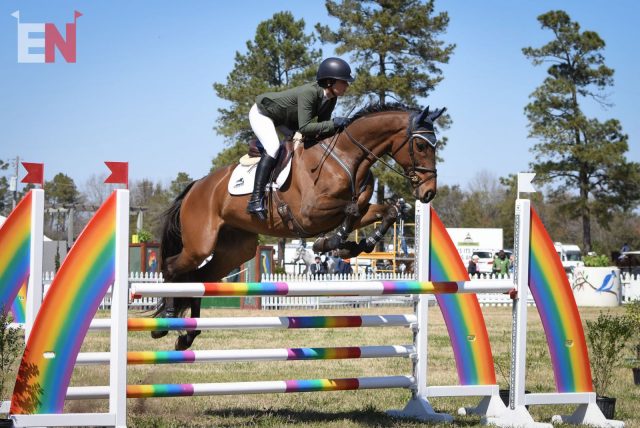 Jenny Caras and Fernhill Full Throttle, her own 9-year-old Irish Sport Horse (Cyrano X Euro Glory, by Euro Clover), jumped clear to move from eighth up to fourth place on 31.8.

Alex O’Neal and DJ, his own 10-year-old KWPN (Warrant X Vivian, by Voltaire), also delivered a clear round inside the time to jump from ninth up to round out the top five on the leaderboard on 32.1.

Click here to view full scores in the CIC2*. CIC2* cross country will stream live on EQSportsNet starting at 9:50 a.m. EST. Click here for information on how to access the live stream. 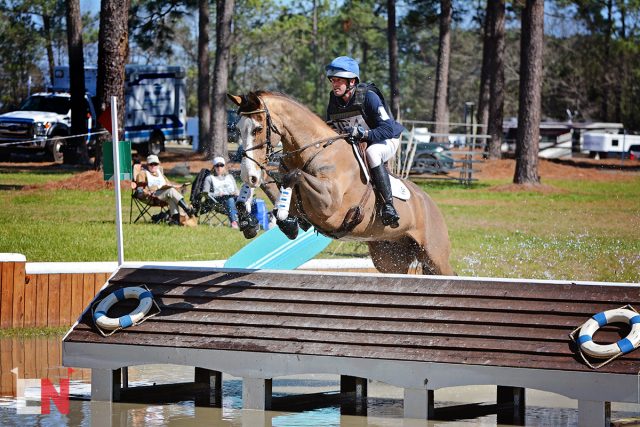 Will Faudree and Quintessential. Photo by Jenni Autry.

Looking to the CIC1*, Ian Stark’s cross country course certainly shook things up, with only 15 combinations (18.2% of the field) making the optimum time of 5 minutes, 35 seconds. Dressage leaders Leslie Law and QC First Class picked up 2 time penalties, which opened the door for Will Faudree and Sarah Pyne’s Quintessential to take the lead on 25.6 thanks to making the time.

Will has been riding the 10-year-old Irish Sport Horse (Vriend X Touchdown Lady, by Touchdown) since last year while Sarah spent a semester abroad.

“He’s definitely her horse, and I’ve been happy to help out,” Will said. “He’s fun to ride, and I was very happy with him today. He jumped cross country super. It was a great course; Ian did a super job. It was to the level, but it really rewarded the horse.” 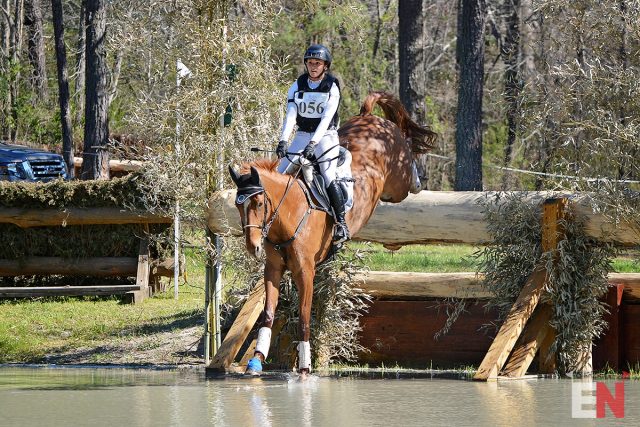 Ellie MacPhail O’Neal and Sally Cox’s Zick Zack, a 9-year-old Swedish Warmblood (Blue Hors Zack X Mercedes, by Master), jumped clear and inside the time to move up one spot on the leaderboard to sit in equal second place in the CIC1* on 25.7.

Boyd Martin and Denise Lahey’s Contestor, an 11-year-old KWPN (Contango X Jer’s Princess, by Killer Jer), is tied for second place, also on 25.7, with a clear round inside the time. 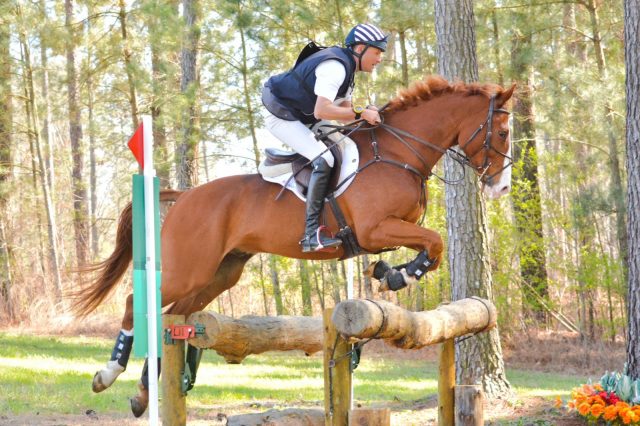 Click here to view full scores in the CIC1*. The CIC1* horse inspection will be held at 8 a.m. EST tomorrow morning, followed by show jumping at 10 a.m. EST.

In addition to a large CIC3* division, we also have a top notch Advanced division taking place here at Carolina International, with a number of horses using this event as a prep run ahead of major spring CCI competitions.

(The Advanced division completed dressage today on the other side of the venue during CIC3* and CIC2* show jumping. Considering technology has not yet advanced to the point where I am able to teleport or clone myself, coverage of the Advanced division and other National divisions is sorely lacking. Please accept my sincerest apologies. May the eventing gods have mercy on my soul.)

Thank you for following along with all of EN’s coverage from Carolina International. Go Eventing! 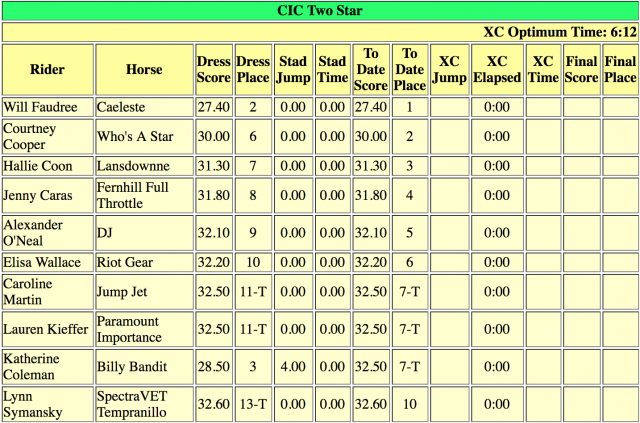 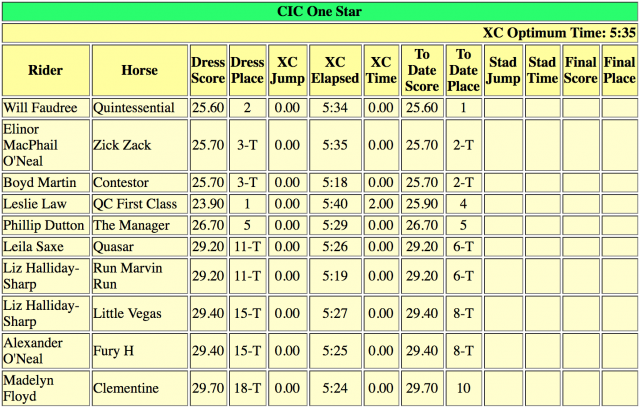 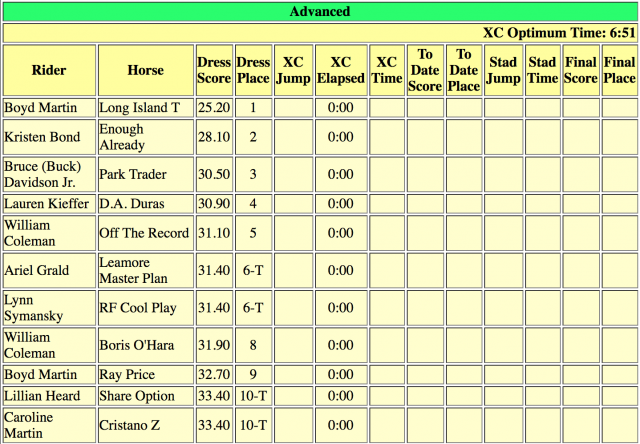