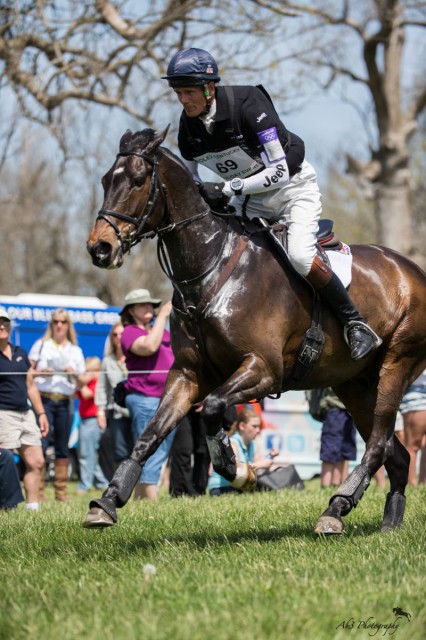 William Fox-Pitt and Bay My Hero. Photo by Alec Thayer.

Cross-country has just concluded here at the Rolex Kentucky Three-Day Event, and William Fox-Pitt and Bay My Hero are your overnight Rolex leaders thanks to their double clear trip. Lauren Kieffer and Veronica and Phillip Dutton and Mr. Medicott also jumped double clear to move up one spot to second and third place, respectively. Marilyn Little and RF Demeter turned in another of the double clear rounds to move up from ninth to fourth place, and Michael Pollard and Mensa G jumped clear with 2 time penalties to drop one spot to fifth place. As expected, Derek di Grazia’s course rode very tough, requiring an aggressive, forward ride. Riders needed to come out of the start box attacking the course. Those who rode that way were rewarded with double clears; those were rode backwards had trouble.

While we saw plenty of problems, we also saw some truly brilliant rides today. Sinead Halpin and Manoir de Carneville looked fantastic, and Tate was still pulling at the end of the course. Meghan O’Donoghue and Pirate had a cracking, forward ride for one of the fastest times of the day. Phillip Dutton had the first double clear of the day with Trading Aces, who ran out of steam last year at Rolex but looked fighting fit the whole way around today. Phillip and Marilyn Little had double clears on both their rides — definitely an impressive accomplishment. Hannah Sue Burnett and Harbour Pilot and Kim Severson and Fernhill Fearless also had fantastic double clear trips. Ballynoe Castle RM looked as good as he ever has today on his way to a double clear with Buck Davidson, who looked over the moon after crossing the finish. And I have to give a huge shoutout to Rachel McDonough for jumping double clear in her Rolex debut with Irish Rhythm.

In all, 19 pairs jumped double clear around the course, an impressive feat when you consider how tough this track proved to be. Overnight leaders Allison Springer and Arthur fell victim to the Normandy Bank, which emerged as one of the most challenging complexes on course.They had a runout at the brush corner at the B element, ending their cinderella story weekend that began yesterday with their beautiful performance in the dressage. Jon Holling retired at the Normandy with Zatopek B in the horse’s first attempt at a four-star. Emily Beshear and Here’s To You also retired at the Normandy Bank after a runout at the B element. Erin Sylvester had a nasty fall here from No Boundaries where she slid head first into the third element; she bounced right up and walked away, thankfully. Julie Norman and Consensus had their runout at the B element at the Hollow.

The Water Park at fence 5 also proved to be one of the most influential elements on course, and it rode sticky for riders ranging from Rolex rookies to Andrew Nicholson, who schlepped his way through with Avebury to ultimately produce a double clear. Will Faudree and Pawlow had a runout here at the brush coming out of the water before retiring at fence 12, the Tobacco Stripping Bench and Whiskey Corners. Allison Springer and Copycat Chloe retired at the Water Park after a stop at the duck, the middle element element in the water. Lindsey Oaks and Enchantez also had a runout at the brush here before jumping completely off the track and into the crowd in a runaway moment. Caitlin Silliman and Catch A Star also had trouble at the Water Park before picking up runouts at the Land Rover Hollow and Offset Brushes, resulting in elimination.

Ten riders in all had stops on course but went on to complete, and another 10 were eliminated. Allie Knowles popped off Last Call after a sticky landing following the trakehner at fence 8, a heartbreaking outcome in their second attempt to get around Rolex. Sharon White and Rafferty’s Rules also had a very scare fall at the Normandy Bank following a runout at the Whiskey Corners at 12b. Thankfully both Sharon and Reggie were OK. Dana Widstrand and Relentless Pursuit had three refusals at 9b at the Frog Pond, leading to elimination in their Rolex debut. Madison Park hung a leg into the Head of the Lake and unseated Kyle Carter, and they both fell hard. Thankfully, they were both up and OK, with Parker suffering an elbow lacer. Kate Chadderton and Collection Pass fell here after having a stop at the Frog Pond, and they’re both OK.

Tim Bourke and Luckaun Quality had a scary fall at 25a, the Horse Park Barns, just a few fences from home; Rolex has confirmed that Obie is fine and resting comfortable back at stabling. Bobby Meyerhoff and Dunlavin’s Token also parted ways at the Horse Park Barns — such a bummer of a way to end their Rolex debut for both Tim and Bobby. Six pairs retired on course. In addition to those already mentioned, Debbie Rosen retired The Alchemyst after two stops at 5A at the Water Park, and Kaitlin Spurlock retired Expedience after a freak accident at the Head of the Lake. It looked like Spedy glanced off a brush there, injuring her right front leg in the process. There was a hold on course, and Spedy was taken away in the horse ambulance to be examined. Rolex later confirmed Spedy fractured her foot and has been transported to a local equine hospital for surgical evaluation.

Jennie Brannigan and Cambalda launched themselves over the wide side of the Whiskey Corners at 12b, completely missing the flags, and were eliminated. She yelled back to the fence judge to confirm if she made it through, and she was presumably told to continue on, so this is a real bummer of an outcome considering they were clean and fast around the rest of the course. Kevin Keane and Fernhill Flutter were also assessed a stop after coming home clear. It looked like they were trying to take an option at the Land Rover Hollow, but the jump judges obviously felt otherwise.

In addition to Doug Payne and Crown Talisman, four pairs withdrew before cross country. Jessica Phoenix withdrew Pavarotti early in the day, as did Buck Davidson with Petite Flower, who had three stops on cross country in her final prep run at The Fork. Mark Todd also withdrew Oloa after the horse lost his marbles a bit in the dressage yesterday, which failed to give them a competitive score for the rest of the weekend. Phillip Dutton withdrew Mighty Nice toward the end of the day. In the press conference, Phillip said Happy tweaked a shoe on Thursday, and while he’s felt good and worked through the discomfort, he wanted to play it safe and will likely re-route to Luhmuhlen.

We started the day with 59 pairs, and 39 will move forward to the final horse inspection tomorrow. Stay tuned to EN for much more from Rolex. Phillip Dutton just accepted the keys to a brand new Land Rover Evoque thanks to hitting the optimum time with Boyd Martin’s Trading Aces, and he just spoke in the press conference along with William Fox-Pitt and Lauren Kieffer. We’ll have the press conference video uploaded for you shortly, along with much more analysis on all the action that went down today. In the meantime, check out John’s open threads (click here for part one and here for part two) for photos, videos and GIFs of the day. USEF Network has also uploaded a lot of videos. Go Rolex. 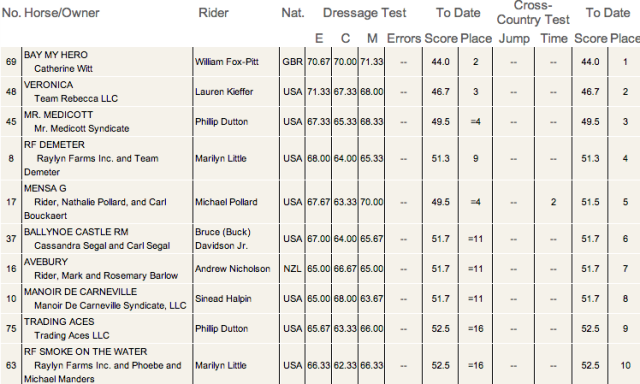