When I found that immediately after LRK3DE William Fox-Pitt was coming to the incredible RockGate Equestrian Center in Texas to offer a three-day clinic: a day of semi-private dressage lessons, a day of cross country schooling, and a day of stadium jumping. I opted to audit all three days, and what follows are my notes put into consumable form. This is the second of three parts in this series — to read part one, click here. 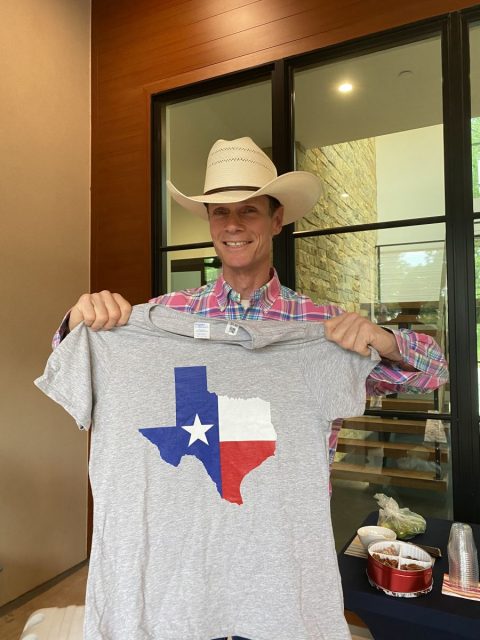 Cross Country: Teaching Horses to Think for Themselves

The second day of the William Fox-Pitt clinic at the incredible RockGate Equestrian Center in Texas dawned grey and windy, so the organizers flipped cross country and stadium days since some really nasty weather was heading our way for day three. The rain held off, and the cross country riders enjoyed a cool, breezy, cloudy day. Here’s what I learned:

It’s important to teach our horses to think for themselves on cross country. After all, as William says, they may have to save our bacon one day. He also is a huge believer in a good neck strap, and by the end of the day, most riders had procured one. He says he uses it in all phases — it helps him not grab the reins, it helps him keep his hands still (he said he tied his hands to one when schooling dressage!), and, of course, it helps him stay on. 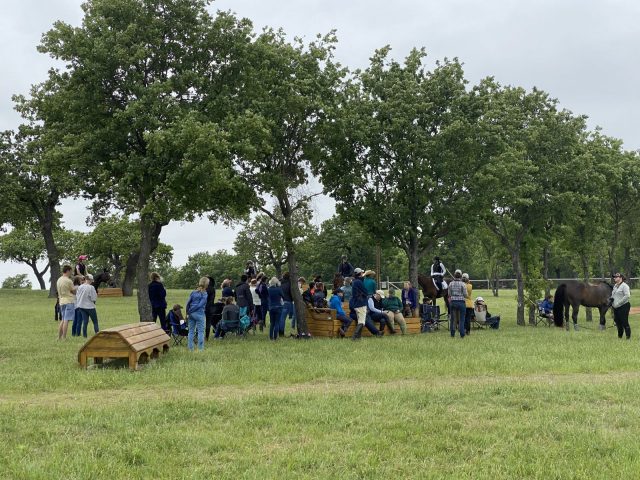 William believes in a “no second go” sport. Horses are NOT allowed to stop. They can jump from a standstill, or back up a few steps and jump, but stopping is not an option. He noted that other famous riders, like Lucinda Green, don’t mind stopping as much, because they like to find out what horses can’t do and then address it, so he realizes his mantra of “no stopping” isn’t necessarily for everyone.

The focus of day two built on day one: rhythm, connection, straightness. After each group of riders had warmed up, he asked them to jump a few things they felt comfortable popping over at either a trot or canter. He encouraged them to start out at a trot, too, since jumping from a trot often highlighted issues that the riders could identify and then address. He doesn’t like to warm up for cross country with a lot of jumps, but just enough to get the horse thinking about going forward. 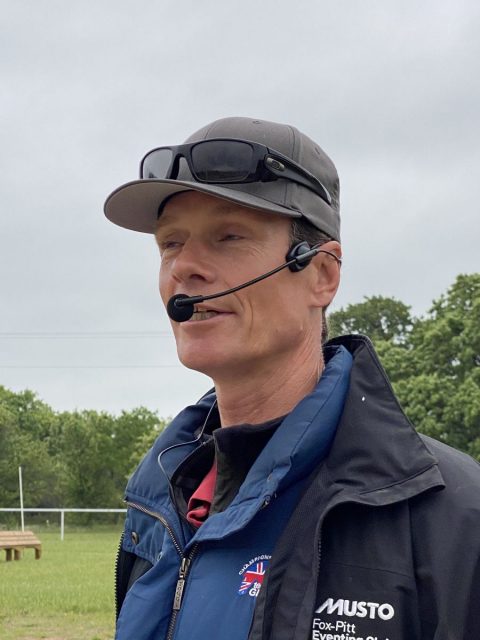 Someone asked him what the difference was between how U.S. riders and British riders approached eventing, and William said that U.S. riders “overcomplicate things”. We like to learn (he was amazed that some U.S. riders ride in clinics, but don’t compete), but we think too much; Brits go out and DO it. This attitude foregrounded the cross country session: he asked the riders to do a series of fences from the start, rather than focusing on one or two fences at a time. He used the great topography and put together a series of jumps that included up/down banks, roll tops, tables, related distances, a few corners, brushes, water, and some accuracy fences/lines.

He noted that he likes a full-cheek snaffle (a fulmar) for jumping, because it gives the rider more control when turning. A D-ring or eggbutt is good, too.

William believes that we have to start schooling water correctly early on. Many of the riders let their horses get long/strung out in the water, and he made them go again with a shorter, choppier canter stride in the water. If a horse is going to jump out, he needs to have access to his back legs.

He encouraged riders to “get it done” before fences — and that means using LEG, even if it means a good old-fashioned pony club kick. No hand without leg!

If a rider had difficulty with a fence or a line, it usually came back to his original mantra: rhythm, connection, and straightness. A few of the riders were having confidence issues, and he simply directed them to go out and get over it….literally! It was fantastic to see riders focus and ride through their fear, ecstatic at conquering their demons. The mighty auditing crowd (and the other riders) all served as an enthusiastic cheering section. 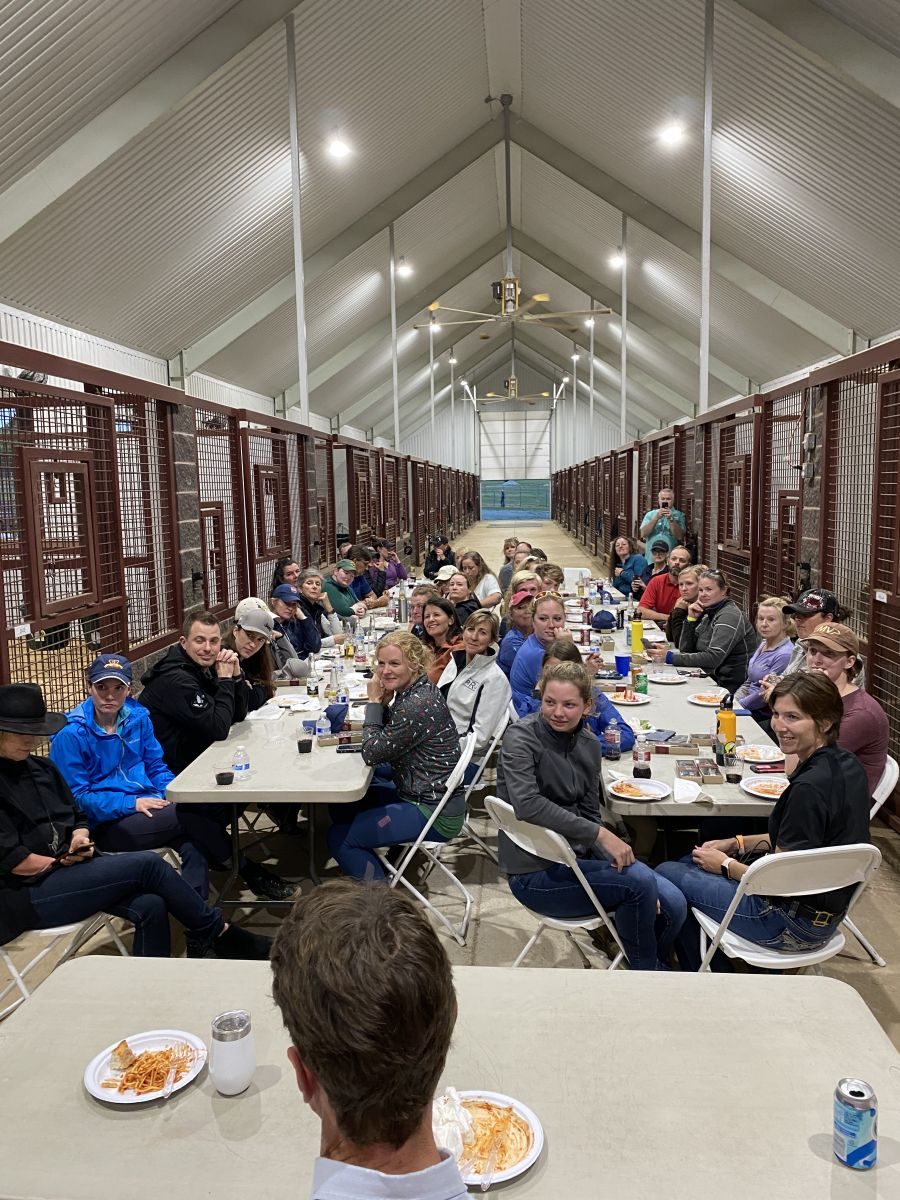 At the end of the first day, we held a reception for William, indoctrinating him – making him an honorary Texas, complete with cowboy hat. After cross country, we had a dinner in the barn aisle, and William gave us a talk about a typical day for him, and he answered questions (which were often punctuated by the horses snorting or sighing). It was a fantastic two days.

Best line of the day:

“The best event riders are probably a bit thick — they don’t overthink things. They have a plan, and they stick to it. Then, when things go wrong, they deal with it.”

Come back tomorrow for the final piece in this series!