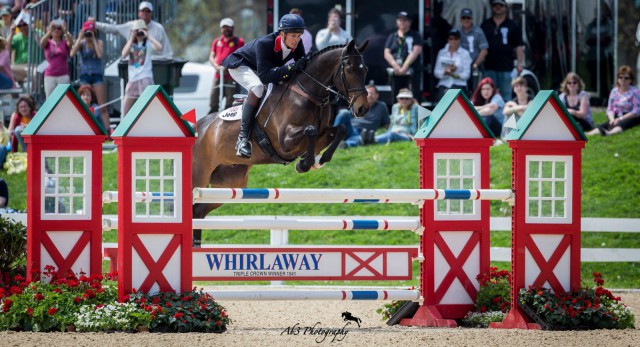 William Fox-Pitt and Bay My Hero. Photo by Alec Thayer.

William Fox-Pitt and Bay My Hero entered the Rolex stadium as the overnight leaders and last to jump. After Lauren Kieffer and Veronica delivered a fantastic double clear trip to thunderous applause, William couldn’t afford a single rail, and he proved why he’s the best in the world by rising to the occasion to deliver the clear he needed to clinch his third Rolex victory on 44.0. He’s now pulled just one total rail in his last five Rolex appearances combined — talk about legend status. Lauren and Veronica finished second on 46.7 and are the new USEF National Champions. Buck Davidson and Ballynoe Castle RM achieved what they set out to do this weekend, improving on their fourth-place finish from last year by finishing the weekend in third place on 51.7. The entire top five jumped double clear, with Sinead Halpin and Manoir de Carneville finishing in fourth place, also on 51.7.

Marilyn Little followed next with both her rides RF Smoke on the Water and RF Demeter in fifth and sixth place on scores of 52.5 and 55.3, respectively. Smoke was held this morning at the final horse inspection but came out this afternoon to jump a fantastic clear, which is an impressive showing for such a young horse. The horse is 9 years old, and Marilyn held up nine fingers to the crowd as they cheered after her trip. RF Demeter had one rail, which is a significant improvement from their last four-star jumping effort. Jan Byyny and Inmidair pulled one rail to finish in seventh place on 56.7, and Phillip Dutton and Trading Aces had one rail and one time penalty to finish eighth on 57.5. William Fox-Pitt and Seacookie TSF jumped clear to finish 10th on 59.1, and Selena O’Hanlon and Foxwood High jumped clear with one time penalty to round out the top 10 on 59.4 in the horse’s first four-star.

Richard Jeffreys’ show jumping course certainly didn’t make it an easy day for the 37 riders who went forward into the final phase. Ten pairs jumped double clear, with Selena and Woody jumping clear with one time penalty — that’s about 30 percent of the field. Eight pairs pulled two rails, with 17 pairs pulling two or more rails. Andrew Nicholson and Avebury pulled the most rails of anyone, taking out poles at six fences and also picking up a time penalty. Two pairs had stops on course. Houdini slammed the breaks at the first fence with Katie Frei, and Tom Bombadill Too stopped at the first element of the triple combination, launching Ruy Fonseca over the fence. The horse then went on his own victory gallop around the ring, eventually being caught after a few spirited laps around.

As for notable rounds, I think Libby Head and Sir Rockstar have to win the ride of the day simply based on the sheer scope of that achievement. A Rolex rookie and one of the youngest competitors in the field at just 22, Libby piloted Rocky, who is notoriously spooky, to a beautiful clear to finish inside the top 20, moving all the way up from 43rd after dressage. Selena and Woody also had a brilliant trip to move up from 27th to 10th as the highest-placed Canadian pair. Buck Davidson jumped clear on both Reggie and Park Trader — the only rider other than William to accomplish that today. We have so much more to bring you from Rolex, including a press conference report, videos and much more analysis from Rolex. In the meantime, be sure to check out John’s open thread to see how all the action went down in the finale of North America’s biggest event. Go eventing.