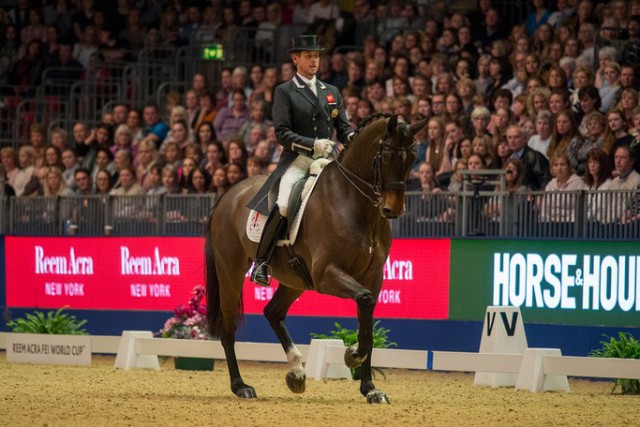 Even senior coaches can be inspired! An elite group of senior coaches from all disciplines recently spent a unique morning with Carl Hester, at his exquisite training base near Bristol, watching nine of his horses being worked and learning from the man who has changed the dressage world for the better, not just in the UK but world-wide. As a consequence of his success more leading dressage trainers and riders are trying to keep their horses happier, trying to use less force and trying to keep things more simple. Now harmony, lightness and ease are more than just an aspiration but a requirement for high level marks.

As Carl says, “People want to do what the winners do … There are going to be people who will never change their ways, but there’s going to be a bigger majority who want to know what you do, why you do it and would it work for them … and it’s not just about turning horses out!”

“It was interesting because after the Olympics, one of the biggest questions I kept getting, mostly from Dutch and German magazines was, ‘Do you contribute your success to the fact that you turn your horses out?’ And I’d say, no. I contribute our success to the fact that we train them the best we can. You wouldn’t go to an event rider and say did you win Badminton because you turned your horse out into the field. They’d just laugh at you. But we do work our horses in the arena less than many, with a four day a week training program.”

So horse-friendly, no-force dressage is now at the top of the training agenda and as a result dressage has never been more appealing. As a result more riders are attracted to dressage and there is a growing audience wanting to watch and invest in the sport of dressage. Yes, Carl’s partnership with Charlotte Dujardin and Valegro has been instrumental in this process, but having worked with Carl for 10 years, since she was 20, Charlotte would be the first to admit that Carl has made her the rider she is today.

As a result life is also so much easier for dressage coaches, because once again they can have total confidence that there is a route to follow that is both logical and humane and can lead to the highest levels of dressage. I write this as someone who has always loved dressage, but became disillusioned as a young man when I found numerous senior dressage trainers using strength and bullying rather than lightness and partnership. One eminent dressage trainer even tied my thumbs to the saddle so I could hold my horse’s head down!

Echoes of the past

Our own horses at home were light and easy to ride. If they were like this I was a happy man, but after I left home I found few others who trained in this way and few who did not crank the nosebands as tight as possible. The exceptions to this ‘jank and spank’ brigade were Herbert Rehbein and Robert Hall, whose horses were light and easy to ride and went with great quality.

So when Carl talked about lightening the seat in the piaffe and canter pirouette I was immediately reminded of Herbert Rehbein, who always said the same thing, and when Carl said, “A good piaffe and passage come from a good trot; and a good flying change comes from a good canter,” I was immediately reminded of Robert Hall, who in addition would often say that a good transition comes from a good pace before the transition and a good pace after the transition. However, Carl also emphasized that the transitions themselves are a gymnastic exercise that improve the balance of the horse, and especially transitions within a pace. “Use lots of forward and back transitions within the canter to spice up the hind leg.”

“I went to Holland to Bert Rutten, who is a very classical, straightforward trainer, and people ask me what did you learn from Bert?  ‘On and back.’ That’s all he used to say, ‘On and back.’ So then I would ask, why do I have to do on and back all the time? And he’d say, ‘Because you need to get the horse to balance himself on four legs.’ Right, so then I knew what balance was and then I knew what self-carriage was.

After their gold medal success in the London Olympics Carl and Charlotte gave each other some space to reassess how their training partnership was going to work, but after a period of uncertainty they have found a way to use each other’s strengths and suit their different personalities, so it is still very much a team effort. They both ride with each other and ride each other’s horses. “Charlotte is a trotter,” says Carl, “and I am a canterer. So it works well. I do enjoy watching other people ride my horses, and I do think for my horses as it’s good that other people ride them. I also know that the best way of learning is by feel.”

There is no doubt about their bright future together as they train probably the best group of horses they have ever had. They each have two Grand Prix horses aiming for the Tokyo Olympics, and Charlotte’s record breaking nine wins at the British Championships both confirms that their training delivers the goods at all levels and suggests they have a wonderful pipeline of future Grand Prix horses.

Charlotte has a new 5-year-old gelding she bought in the USA called Gjio. There is no doubt that she is already in love with him and there is no doubt that he is really talented, with more than a hint of Valegro in his temperament and way of going. The exciting thing for me is that he is just 15.3. Charlotte says 16.00 but he is certainly not big! I believe we are breeding horses that are often too big for a long healthy life and as a result wasting the resources of those investing in the sport and failing to breed horses to suit the whole range of riders. This particularly applies to dressage. So I hope Charlotte and Gjio go on to be Grand Prix winners and continue to change people’s perception as a result. (Valegro is small by dressage standards as well.)

In elite racing, eventing and show jumping there are many more successful horses below 16.1 than there are above 16.2, yet in dressage fashions have meant a majority of bigger horses are used at elite level despite the statistics clearly showing reduced longevity. It is also nonsensical to value size of step over quality of step and put so many smaller riders at a disadvantage riding horses that are too big for them.

What Carl looks for in a dressage horse

Little Gjio obviously loves his work, rising to the challenges, and is full of joie de vivre. It is essential for Carl that both riders and horses are happy and it was noticeable that all his horses are ‘self starters,’ horses that are willing and have a work ethic.

“Horses need bravery as they work, so they have that essential desire in the ring. Lazy horses I don’t do. If a horse is lazy because he’s weak or immature, then that’s absolutely fine and we just wait for him to mature. If the horse has that inherent laziness in him, I wouldn’t bother. I don’t ever want to be in a position where I have to make a horse do it, and the whip is an aid not something to make a horse keep going. For me the end result of dressage is that it has to be elegant, it has to be easy, it has to be a pleasure to watch and it should be in harmony. If it’s not, if I’m scrubbing away and shoving away on something, that’s not harmonious and I don’t enjoy it.” (Carl also mentioned how wrong it is that some trainers think forwardness means being strong into the hand.)

“When buying a horse I am not really interested in the breeding and I don’t look for the flashiest or biggest mover, especially in trot. The trot is the easiest pace to change and improve but you need to buy a good walk and a good canter. I am not concerned with winning young horse dressage classes as the horses that win these are not what I look for in a Grand Prix horse. I want quickness, neatness and tidiness, rather than massive movement. Beyond this I just look for a great hind leg and a nice physique, and the rest is training and temperament.”

Charlotte added that it was also about a rider’s position and ability to go with a horse, because “it is often the rider’s position that creates the problem.” She works hard at her core strength and flexibility by going to the gym four times a week, although she doesn’t do weights as she says she doesn’t need more strength. Some days she will ride up to 11 horses. Each for 20 to 30 minutes, but they are first warmed up for her and then cooled down.