William Micklem returns today with follow-up thoughts on his column about the subject of happiness, which resonated with many EN readers around the world. Click here to read his original article. Thank you to William for writing, and thank you for reading. 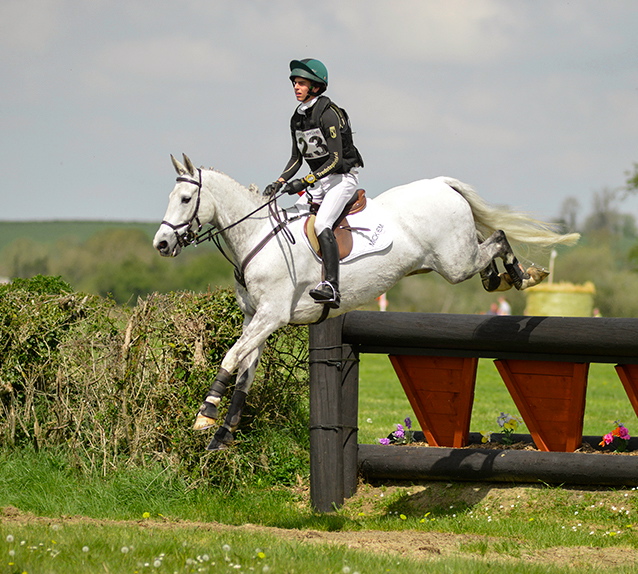 Sam Micklem and Smart Spirit on their way to winning the Kilmanahan CCI2* this spring. Smart Spirit is out of High Dolly and a half-brother of Mandiba, High Kingdom and William's stallion Jackaroo. Photo used with permission from EquusPix Photography.

My son Sam on his horse Smart Spirit had some wonderfully happy experiences this year, winning his first Senior CCI2*, despite being a Junior, and winning a Young Rider international in Scotland. But he also had some difficult times towards the end of the year when things did not go according to plan.

So he has to count his blessings, draw on his past experiences, both good and not so good, and get through this with the help of his support team. Onwards!

All these challenges are going to be of huge value in Sam’s life as a whole, and he is very lucky to be involved in a sport that will do this. In Germany this year a study showed that horse riding builds character and promotes social development. Commissioned by the German Equestrian Federation, it investigated what character elements were engendered through horse riding.

The study involved 411 riders aged 14 to 65, 91 percent of whom were women and 9 percent male. For comparison, the researchers surveyed 402 non-riders who collectively met the same gender distribution, age and income bands of the riding group. Riders, it was found, were generally more determined, enthusiastic, structured and balanced than their non-riding counterparts. They also showed greater leadership, were more assertive and competitive, and demonstrated greater resilience.

“We have always been convinced of the positive impact of the horse on the development of children and adolescents, because it corresponds to our experiences and observations,” Soenke Lauterbach, the federation’s secretary general, said, “and now we have some good evidence.”

A much bigger, totally independent, and long-term study published their results this week. Researchers from Glasgow and Edinburgh Universities studied almost 10,000 people born in 1958, as part of the National Child Development Study, and assessed their mental health in relation to their participation in Scouting. They discovered that those who joined the Scouting movement as children had an 18 percent lower risk of suffering anxiety or mental ill health in middle age.

Their conclusion was that spending time outdoors, learning practical skills, working in teams, moving out of one’s comfort zone, developing self-reliance, perseverance and a desire for self-learning, all help to build lifelong emotional resilience. Emotional resilience is something all of us need to develop in a world where instead so many expect others, including the state, to ride to the rescue at the first sign of difficulty.

My suggestion is that all these things are also very much part of horse sports and that horse sports are good for our mental health and happiness.

It is obvious that a key part of the value of scouting and horse riding is EFFORT. In my previous article on happiness I talked about the essential yin and yang of performance was effort and delight. As effort without delight usually leads to giving up, while delight without effort usually leads to no progress.

There are two special young men who have epitomized ‘effort and delight’ this year.  Two young men who were wildly cheered as they rowed on the Charles River in Boston last month. “Pull like a dog,” the spectators shouted, as they also wore T-shirts with the same slogan ‘Pull like a dog.’

They are the Irish brothers Gary and Paul O’Donovan, who won the silver medal in the lightweight double skulls in the Rio Olympics. They come across as though they are having the greatest time in their lives and they now have a worldwide fan club who love their affable nature and sense of fun. “It isn’t too complex really,” says Paul, “you go A to B as fast as you can go and hope for the best. Close the eyes and pull like a dog!”

The reality is these two lads have made a huge daily effort, ever since they were 10-year-old boys in the tiny town of Skibbereen in Cork and had the dream of going to the Olympics. Their continuous effort has been extraordinary and their medal was no fluke.  The fact that they take their effort and work very seriously, but not themselves, is a powerful practical philosophy that could help many of us mentally.

It is so true to say that the world is littered with talented people who fail to fulfill their potential because of a lack of effort — their inability to pull like a dog! Famous Irish writer and school teacher in the USA, Frank McCourt, author of Angela’s Ashes, said something that directly links with this. “Now I think it is time to give myself credit for at least one virtue, doggedness (tenacity & grim persistence). Not as glamorous as ambition or talent or intellect or charm, but still the one thing that got me through the days and nights.”

Committed to Praise and Training

I met another famous Irish writer this week, Roddy Doyle, the author of The Commitments, among many other books. I reminded him of the time he said this of an essay he wrote at school when he was 9. “… It was my first essay….I got it back and he praised me to the hilt … I have been feeding off that praise ever since.”  It is a quote I often use for coaches as an example of the power of a little praise. It certainly brings happiness.

The reason I met Roddy was because eight years ago he started a creative writing program for children called Fighting Words. They have four centers in Ireland at the moment with four more about to open. Last year they worked with 10,000 children and they are booked up six months in advance. There are no examinations or tests, just tuition and support and encouragement to write. The bottom line is that large numbers of children enjoy the training, improve their writing skills and sign up for more.

There are lessons here for all those involved in teaching and trying to improve standards. And in case you are reading this and thinking that this type of philosophy can’t really produce quality work, then you should read the books of stories that have been gathered from these sessions and successfully published.

Sadly there are many who associate a positive approach with not telling the truth but instead telling people what they want to hear, of living in a fairy tale and failing to address what isn’t working. However I always tell the truth as well as have high expectations. The key to doing this constructively is to work from another key yin and yang of training, to focus on both ‘realities and possibilities.’

It is common for many elite riders to only focus on realities when they start coaching. Failing to see the potential of their students — failing to show them what is just across the river and on the horizon. As a result they tend to depress their students and they give up.

Instead we should remember that we all start from zero and some of the most unpromising students turn out to be world champions. This is particularly true in horse riding which is a sport for life and sport for all, rather than just a sport for a few years and for exceptional specialist physical gifts.

I always remind myself that Michael Phelps, arguably the greatest swimmer of all time, was once a bored underachieving teenager with ADHD. So I tell the truth, but I still do it by being quick to praise, by working from what is good, by recognizing Personal Bests, and by telling people what they should and could do rather than what is wrong.

In this way both doggedness and happiness have a chance, and Sam has a chance to improve and keep going. In this way it is possible to get the right result both on the scoreboard and on the faces of the performer, and a smile always speaks volumes. As British international team rider Daisy Berkeley (née Dick) wrote to me after my last article “grinning and winning go hand in hand.”

Once again I leave the last word to a genius, this time to John Lennon. “When I was 5 years old, my mom always told me that happiness was the key to life. When I went to school, they asked me what I wanted to be when I grew up. I wrote down ‘happy.’  They told me I didn’t understand the assignment, and I told them they didn’t understand life.”