In this three-part series William Micklem shares reflections and observations from attending the 2017 Pau CCI4.* If you missed them: Part 1 “The Calm Before the Storm,” Part 2 “Triumph and Tragedy.” 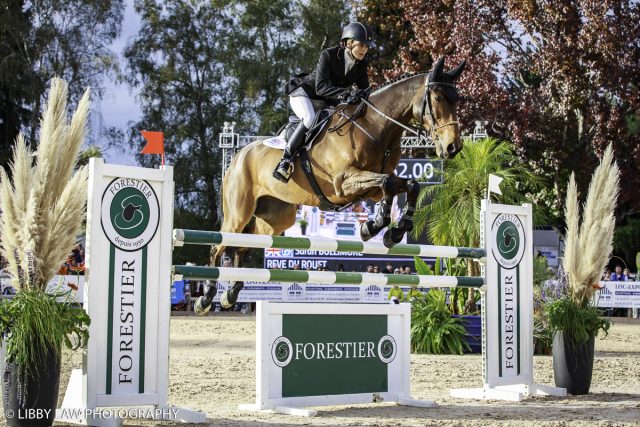 It is noticeable that after their team success in the European Championships the British riders have not only a refined competence but also a heightened confidence, especially now that they have eight riders in the top 20 of the world rankings. (Germany, New Zealand and the United States each have three.)

Much of the credit must go to Chris Bartle, their team coach. At his wish he is not chef d’equipe but is very much in control and leading the coaching all three phases. Some thought this was impossible in modern eventing, but it is working for the British team who love what is happening, finding it easier for both horses and riders who have a more joined up and complementary training programme.

It is always a fascinating exercise to watch and listen to the different coaching relationships at a competition like Pau. What is certain is that every rider is an individual and has individual needs, and the same applies to the horses. This means that coaches in equestrian sport have to be flexible enough to cope with all these variables and avoid being too prescriptive. This requires humility.

Humility is also needed because the coach is not riding the horse and should not act as though they were. In addition they are not going to make big changes, as to a large extent a competition is won not on the days of the competition but on the many previous days and months of progressive training and competition. So instead at a high level competition a coach is primarily in a supportive and motivational role rather than a directing role. But they can still make a crucial difference by being a constant positive influence, and by being a sounding board, giving constructive feedback and making small practical interventions.

And of course they need to know when to stay quiet! Quiet as as their student gets into their performance ‘bubble’, quiet if their student chooses to discuss the challenges ahead with one or two of the world-class riders and coaches at the competition, and quiet as they listen to their student before jumping straight into advice.

Then after a competition coaches needs to be humble about their own performance, including weaknesses. It is a powerful part of progression.

3) It takes a little spirit and a half naked man ….

This is nothing to do with alcohol but everything to do with attitude. The sheer spirit and joie de vivre of so many event riders reflects well on the sport as a whole. A good example of this is Louise Harwood. Her web site tagline ‘Live to Ride – Ride to Live’ sums up her attitude. Her wide smile and enthusiasm bear out her complete love of eventing, matched by her Mum Jackie, who is a constant cheering (and sometimes gently swearing) voice on the sidelines.

Louise is very slightly built and rides at this level despite a thin pair of part functioning legs that are held together by pins as the result of a car crash. She also largely rides very big homebred horses, that would favour strength over speed and like to hunt and feel their way round the cross country. At Pau she and Mr Potts completed their 12th 4*, leaving her very happy and her many supporters emotionally exhausted!

But what is interesting is that when given a class horse she produces the goods. In 1914 riding Whitson she finished a close up 13th at Pau and the best British bred horse for their results during the whole year. What is very appropriate is that on Whitson’s dam side is a stallion called Cruise Missile, who was bred and owned by the supremely spirited British amateur jockey John Thorne.

John’s daughter Diana finished second at Badminton and Burghley in the ’70s on The Kingmaker, while his son, Nigel, was also an amateur jockey who rode the dam of Cruise Missile to win several races. Then tragically Nigel was killed in a car crash and John came out of retirement, despite having broken his back before, to ride a half brother of Cruise Missile called Spartan Missile. John was 54 years old when they came a magnificent second in the four and a half mile Aintree Grand National won by Aldaniti and Bob Champion in 1981. A film was made about the race based on the story of Aldaniti, who came back to win having previously broken down, and Bob Champion coming back after cancer. But the story of John Thorne and his horse Spartan Missile was probably more worthy of a film.

Without doubt Astier Nicholas is a heartthrob! A clutch of girls follow his every move and both his triumphs and disasters are greeted with the same reaction … tears! But at Pau he had a rival. A Cardre Noir uniform on an elegant body takes some beating and Arnaud Boiteau has it all. On top of this he is one of the world’s most elegant riders.

His show jumping round on Quoriano was the round of the day. Perfect form and function from both horse and rider, a round that most can only dream of achieving. They have has five top five finishes in 3* events and and were 3rd at Pau in 2014 and must be dark horses for the French Team next year at WEG if Quoriano remains sound, especially as in all their competitions together over eight years they have only ever hit three fences in the show jumping!

5) It takes control of the maggot in the mind…

Sarah Bullimore had to jump first in the show jumping on Valentino, despite being in the top 10 with all three of her horses after the cross country. This is normal as there has to be time to warm up each horse without delaying the class. But Valentino hit two fences, and then 20 minutes later she came in on Lily Corinne and hit three, one of the worst rounds of the day. With scores being close in the class both of these horses inevitably dropped out of the top 10. Suddenly her hold on 3rd place looked less secure, especially as Reve de Rouet had lowered three fences at Badminton this year and seven at Burghley last year.

It must have been incredibly difficult to remain positive as she brought him into the arena. But she came through with a solid and calm clear round, in the process putting the top two riders under real pressure as they would both have to jump clear to stay ahead of Sarah.

I asked her afterwards how she coped with the pressure and the negative ‘maggot in the mind’ that often harms the performance of many performers? “I was so delighted with how they went across country yesterday that anything reasonable today was a bonus,” she replied. “So I was not concerned by my first two rounds or what happened at Badminton.” This is definitely a good way for a rider to ‘stay in the moment’ and avoid the tension that is produced by thinking of winning. Of course as a result they are more likely to win.

When hitting a fence this strategy also helps to avoid the tension and wrong focus of cursing a mistake or bad luck as you approach the next fence. As far as Sarah was concerned she was riding her own race and the event was already a PB for her, therefore she was a winner.

Next Time: Pau 4* – The concluding article — Part 3B, Love and Luck