In this three-part series William Micklem shares reflections and observations from attending the 2017 Pau CCI4.* If you missed them: Part 1 “The Calm Before the Storm,” Part 2 “Triumph and Tragedy” and Part 3A “Love and Luck.” 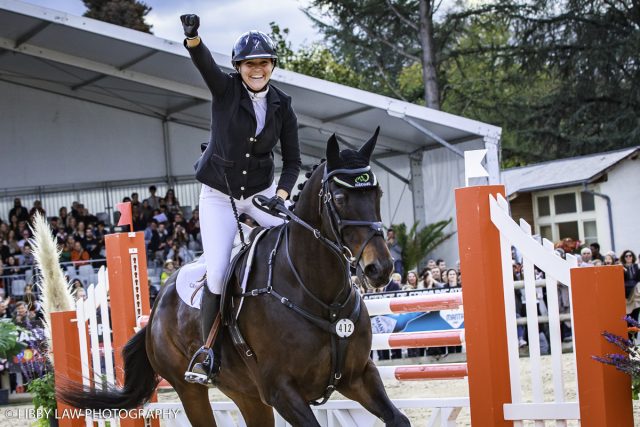 It is easy to dismiss someone who blames something on ‘bad luck’ as being insufficiently prepared, but at times we all benefit from good luck and if there can be good luck there must also be bad luck.

When Gwendolen Fer went into the show jumping with Romantic Love she knew that nothing less than a clear round would give her a chance of winning, as Sarah Bullimore was now only 0.1 behind her after a clear on Reve Du Rouet. They jumped wonderfully until four fences from home, then approaching a four stride related distance, vertical to vertical, she did as many have done before and took a tempting forward and long stride into the first vertical. In doing this she both increased her speed and lengthened the stride and they landed over the first vertical going too fast to make the related stride pattern work easily.

Gwendolen tried to slow on strides two and three but Romantic Love just put his head in the air. It looked certain she was going to go very deep to the second vertical, and was he even looking at the fence? The crowd gasped but Romantic Love appeared to put her legs either side of his body as his belly skimmed over the fence with his head still in the air. Clear! A very lucky clear … then Astier Nicholas came in and hit three and Gwendolen had ridden her luck and won her first 4* competition.

The sting in the tale for Sarah is that if she and Gwendolen repeated these exact performances next year the positions would be reversed and Sarah would be the winner of her first 4*. This is because it is almost certain that the coefficient that spreads the dressage scores will be removed in 2018, putting a little more emphasis on the cross country. Therefore Sarah would be the winner with the better cross-country score!

At the 2012 Olympics in London Andrew Nicholson on Nereo were about to go into the dressage when the judges called an unscheduled break because of a storm. The New Zealand team had prepared for bad weather by training outside at all times, rather than using indoor schools. Andrew wanted to do his test but was delayed in the end by 10 minutes. By this time Nereo had gone off the boil and performed a test that was probably five or six marks less than anticipated. Marks that probably cost him an individual bronze medal and possible the New Zealand team a silver medal. That was bad luck.

Also at Pau was one of our Irish selectors Vina Buller. Vina is one of the few riders in the world to ride at the highest level successfully in both show jumping and eventing. When I first came to Ireland I saw her ride her wonderful pony Caramel Cream on which she won the gold medal in the Junior European show jumping championships.

Caramel Cream was quality and fast and clean and wonderful. A Connemara type he reminded me of wonder pony Stroller in his ability to slide over oxers in an impossible flattened trajectory. Without Caramel Cream it is unlikely that Vina would have had her international career in horses. So how did Vina and Caramel Cream come together? Her father, a totally non-horsey doctor, bought Caramel Cream for his young daughters as an untested, unbroken 2-year-old standing in the field, for £100 including a saddle! That was extraordinary good luck.

Karen Donckers with her mare Jalapeno led from start to finish in the 2* at Pau with a very impressive performance. Jalapeno is over 80% TB as she is out of a TB mare by William Fox-Pitt’s Olympic and WEG ride Chilli Morning, who is having a great start to his stud career.

The debate continues about the role of the TB in sport horse breeding, with many using TBs less because of relatively poor prices as young horses. But I think the tide is turning. For example two of the top prices for young horses, both €26,000, at the recent elite Monart sales in Ireland were both by TBs. While just two weeks ago the TB received support from an unlikely source, Dr Thomas Nissen, breeding director and managing director of the Holsteiner Verband. “We try to use Thoroughbred stallions but it’s not so easy just now … because the Thoroughbred sires are not well known in the sport horse world. Everyone knows you need Thoroughbreds, you cannot work without Thoroughbreds. At the moment it is difficult but I am sure within the next five or six years we will need Thoroughbreds and then we will come to Ireland to find them.”

My horse of the event, the one I would have loved as a young man, was Feldale Mouse, by a pure bred Connemara stallion and out of a high class TB mare. He has jump, courage and a great brain and despite being 15 now could have a great year ahead now his rider Isabel English is being directed by Michael Jung.

9) It takes a special dam and a little breeding research ….

The dams so often still get forgotten but in the vast majority of cases these top horses have special dams with special pedigrees. I noticed three horses with striking elements of their dam’s pedigree.

The 4* winner Romantic Love is out of the TB mare Sherlove Ville, whose grandsire was Shergar. Shergar won the Epsom Derby by a record 10 lengths in 1981 and is one of the top rated TBs of all time. But in 1983 he was kidnapped in Ireland, probably by the Irish Republican Army (IRA) and never seen again. Shergar only produced 35 foals, so to see his genes appear in Romantic Love is very special.

Jonelle Price’s little mare Faerie Dianimo, who finished 10th , has an unusual sire for eventing because she is by top Hanoverian dressage sire Dimaggio, but her dam side includes both Welton Gazelle and Ben Faerie, two legends of event horse breeding.

Welton Gazelle is out of the TB mare Welton Gameful the foundation mare of Sam Barr’s hugely successful Welton Stud that produced the stallions Welton Louis, Welton Crackerjack, and Welton Apollo. These stallions all competed at the highest level and have produced multiple winners of international events.

Ben Faerie was only 15.2 but was a hugely influential TB event horse sire, producing not only Ginny Leng’s great champions Priceless and Night Cap, but was also damsire of Primmore’s Pride who won three four-stars for Pippa Funnell.

Finally I was deeply impressed by Sammi Birch’s Hunter Valley who finished in 4th place. He is out of mare by Brilliant Invader who is a sport horse breeding God in New Zealand and Australia. He certainly ranks alongside Heraldik and Master Imp as a producer of event horses and with Cruising as a prolific sire of both international event horses and show jumpers. His success is no surprise genetically as he brings together the genes of three sport horse TB stallions of the highest quality, Hurry On (sire of Precipitation), Hyperion and Fairway (sire of Fair Trial).

His most famous event horse progeny is Reddy Teddy, Blyth Tait’s world and Olympic double individual Gold medallist. What is so striking is that when the genes of his dam, Double Summer, are added in there are five crosses of Hurry On (3 x Precipitation), 3 x Hyperion (1 x Owen Tudor) and 2 x Fairway. The sadness is that although we know this combination produces jump and exceptional performance these genes are becoming a rarity.

So I have an understandable excitement about my stallion Jackaroo as he has 4 x Hyperion (1 x Owen Tudor), 3 x Hurry On (1 X Precipitation), and I x Fairway. Plus he has crosses of the hugely influential sport horse sires Tourbillon x 2, The Tetrarch x 2, Big Game, Buisson Ardent, Chanteur, Umwidar, and Foxhunter. Everyone will understand why I simply love this breeding and why I believe you can specifically breed the event horse … but success only comes with good training.

The depth and breadth of skills of so many of the riders at this level are extraordinary. With some exceptions the dressage and show jumping skills of international event riders used to be moderate, but no longer is this the case. Now they can be competitive in pure dressage and pure show jumping at an equivalent level. Then to see these same riders with a quality horse in full flow across country, showing both courage and precision control of line and speed, it just takes your breath away. The huge cheering crowds at Pau agreed with me … it is our glorious good luck to be involved in eventing.