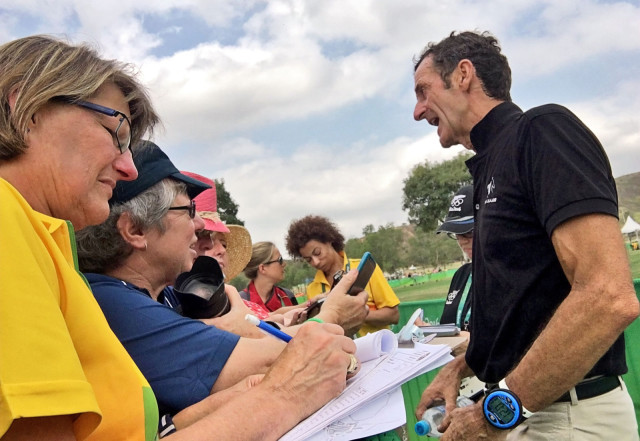 Mark Todd speaks to reporters in the mixed zone. Photo by Jenni Autry.

Oh, to be a fly on the wall in the Olympic cross country mix zone today. Jenni Autry spent her day ducking in and out, catching up with riders after they came off course.

Here’s a sampling of their thoughts (consolidated from a 4,962 word document transcribed by Lorraine Jackson, who deserves some sort of gold medal for that feat — “Eventers are so chatty!” she says.)

Boyd Martin (USA) on why it was a good day to be riding an OTTB: “That was one of the most physically demanding courses — you had to jump a jump, turn, accelerate. It was tiring, it was laboring, it was intense. Question after question after question and you get through one tough jump and you come to another tough jump. I’m so thankful I was on an old racehorse from Kentucky because he kept firing the whole way home. He was definitely on empty coming to the last three and he just tried his heart out and jumped every jump. I was so pleased with him.”

Jessica Phoenix (CAN) on being the trailblazer: “We definitely anticipated going out to war today — that is a serious course. I think it’s going to be a real game changer … My advice for the team would be to dig down and draw on all their experience they have to get their horses around this course.”

Kathryn Robinson (CAN) on the fine line between “careful” and “overprotective”: “I was a bit too cautious and a bit backwards, and I was a bit worried about people have fallen on the turns and he’s a big horse. So I rode a bit overprotective, but we came back in one piece and we’ll do another competition, it’s just a bit disappointing for the team and for everyone involved … It was down to me and I just should have attacked it a bit more.”

Astier Nicolas (FRA) on what jumps weren’t riding well and why: “I thought the corners were not clear, as we all said before. My horse focused on the B element of the long route, instead of the direct route, which made it tricky, but I just said to him ‘Hey it’s okay, we’re going to have a surprise jump. And I didn’t at all like the house to the gate combination at 23. It didn’t feel like something that’s very horsey. Because that’s where we’ve just done all the hills, and then just before you go down the hill on tired horses on the shoulders, and it’s just too difficult to turn the horse in a good enough balance to jump the gate safely.”

Chris Burton (AUS) on his horse’s transformation from startbox to finish flags: “He is a very green, very inexperienced horse so I took a few long routes. The team orders were for me to take the long routes at fence six because for a four-star horse that’s a difficult fence, for a horse doing its first four-star it’s a VERY difficult fence, so I took the long route there, but he’s so fast, I couldn’t believe it! … The guys were having fun with me, they said ‘he started out like the pre-numbers horse that he is but he finished a four-star horse,’ so I’m over the moon.”

Clark Montgomery (USA) on what happened out there: “It was an adjustability issue, he’s very difficult to make come back and then to turn to the right especially. I know it’s something I know that needs to get fixed, we were unable to fix it before we got here, I thought everything really was OK and apparently it wasn’t.”

Mark Todd (NZL) on Leonado II’s fitness and what it took to make the time: “Every time I asked him for a little more he had it in him. When I pulled up I had a little trouble stopping him, actually. But he was very fit, and he was very economical all the way around. Sometimes he can get a little strong and fight me, but today he was really good, and he listened, conserved his energy.”

Lauren Billys (PUR) on finding the finish flags of her first Olympic AND four-star cross country course: “We did it! He was so awesome, everything else felt great. It was the biggest event we’ve done in our life and we’ve done it at the biggest venue possible. This is our first four-star and we decided to go it at the Olympics, so he was awesome, I had so much fun, and I’m really lucky to be riding that horse … If anything, today just showed me that I need to challenge my horse more often, and that’s a great challenge for the future and certainly something we’re totally capable of. It’s just the beginning for us I think.”

Michael Jung (GER) on feeling pressure, what?: “There was a lot of pressure in the warmup arena — pressure from outside, the speakers are very loud, the spectators, the horses see the horses galloping on the track around the warmup place. It gives him a lot of pressure. He was really nervous in the warmup place, and then out of the startbox he was so much elated and too much running sometimes, not always listening to me like normal, so we need a bit more time sometimes on the fences, but all in all he give me a good feeling, he turned everywhere really good, and yeah I’m very happy that he’s healthy at the finish.”

Jonty Evans (IRE) on cross country shaking up the leaderboard: “You don’t want it to be a dressage competition, so you know, hopefully the balance is probably about right. There was no doubt it was a difficult track. There’s no doubt about that. I think you’ll find that very very strong cross country horses have come up.”

Colleen Loach (CAN) on putting mistakes behind her and getting it done for the team: “After I had my second stop, I was like ‘Colleen, you cannot have another stop, you’ve got to finish for your team.’ And that was my main goal, just finish, put the rest out of my mind and ride like I know I can ride. I was just maybe not quite aggressive enough in the beginning — actually maybe I was too aggressive, and should have just sat a bit cooler. My horse was a good was a good boy, he’s a super horse … I mean, I am so inexperienced compared to these other guys so I am pretty happy just to finish, even thought I would have loved to have gone clear!”

Alex Hua Tian (CHN) on taking the long road to Rio: “I’m absolutely astonished with him – he’s only 9, one CCI3*, the other 9-year-olds in the field have done considerably more than him. But I just didn’t feel he was ready at the time. I did feel like he was ready for this test, but you never know until you do it … As he gets stronger in the next few years, I really believe he’s going to be something quite unbeatable.”

Rebecca Howard (CAN) on Rupert rising to the occasion: “The horse is an experienced horse, he’s so genuine and such a great jumper, he’s a pleasure to be on out there. I felt him being a bit careful out there in places and I felt like had to work pretty hard, harder than I’m used to sometimes on him. But even if we were a bit off coming into some combinations, he’s so genuine, and his knowledge and desire to do the job got us out. He tried his guts out to get through the flags.”

Lauren Kieffer (USA) on being mad, but Veronica perhaps being even madder: “I think she was being really good, and it seemed stupid not to go the straight way. And then she just kind of hit that with her right front, for a second I thought she might save it, but down we went. My job was to get a clean round, first and foremost, and it’s pretty disappointing to let the team down. Veronica is fine — by the time I got back to the vet barn she was jigging and trying to bite me, so I’m not sure who was more mad. She’s fine, she’s a tough mare.”

Phillip Dutton (USA) on the team’s mixed cross country fortunes: “Our first rider out, Boyd, rode like a demon. That’s probably one of the greenest horses here and he just rode incredibly well. And obviously Clark’s horse didn’t want to play at all, by the looks of it, and Lauren I thought was pretty unlucky, I thought she had a super round — it’s crazy. My gut – this probably brings home to us that cross country is still very important, and no one is worrying about their dressage score at the moment.”

Jonelle Price (NZL) on starting weak but finishing strong: “I didn’t have a particularly good jump at 1, 2 or 3, I was slightly down on my first minute, we scraped our way through the first water, and then gave her a stick across her bum and said ‘come on, we’ve got to get after this,’ and she was good pretty much from there on. I probably chickened out a little bit at that last water – the clear round was definitely the order of the day –and it just felt a little bit chancy. I think it was the right decision in hindsight.”

Ingrid Klimke (GER) on her team not crushing everybody for once: “Yeah, but sometimes other nations have the same. We have been very good, so maybe it’s time for another nation. I think it’s more about when all the riders together are sitting in the tent watching and clapping for the Chilean boy, and he took the long way always, and he came home! We know that being out there is a challenge for every horse and every rider and we are all good friends. It’s a big family, the eventing family. I don’t even realize now, who is first second third. We will find out later.”