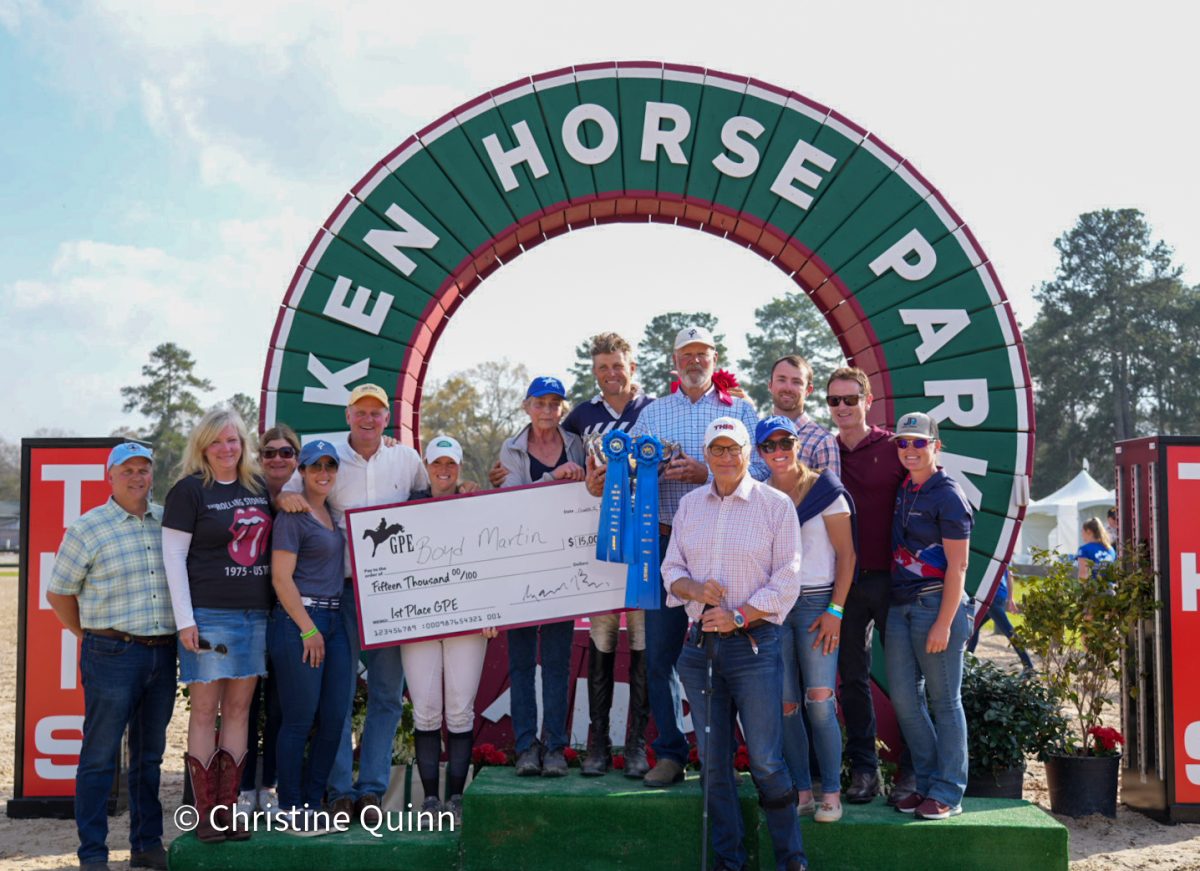 A win for Annie Goodwin. Photo by Christine Quinn Photography.

Chased around the winding cross country track at Bruce’s Field by the cheers of thousands of spectators, Boyd Martin rode for the title at the Grand-Prix Eventing Festival in Aiken — it was just a matter of which of his two horses would end on the better score. But Boyd had an extra boost aboard the Annie Goodwin Syndicate’s Fedarman B (Eurocommerce Washington – Paulien B, by Fedor), as he rode in Annie’s honor in front of her closest friends and family members. It would be “Bruno” who would cap off the weekend as the crowned winner of the $50,000 Grand-Prix, finishing just ahead of stablemate Tsetserleg (Windfall – Thabana, by Buddenbrock) on a score of 25.9.

It was a weekend for Annie as the Aiken local was honored in a memorial earlier today. Annie passed away in a schooling accident last summer, and her family has kept her top horse going with Boyd, who had coached Annie throughout her career, as a tribute to her memory. 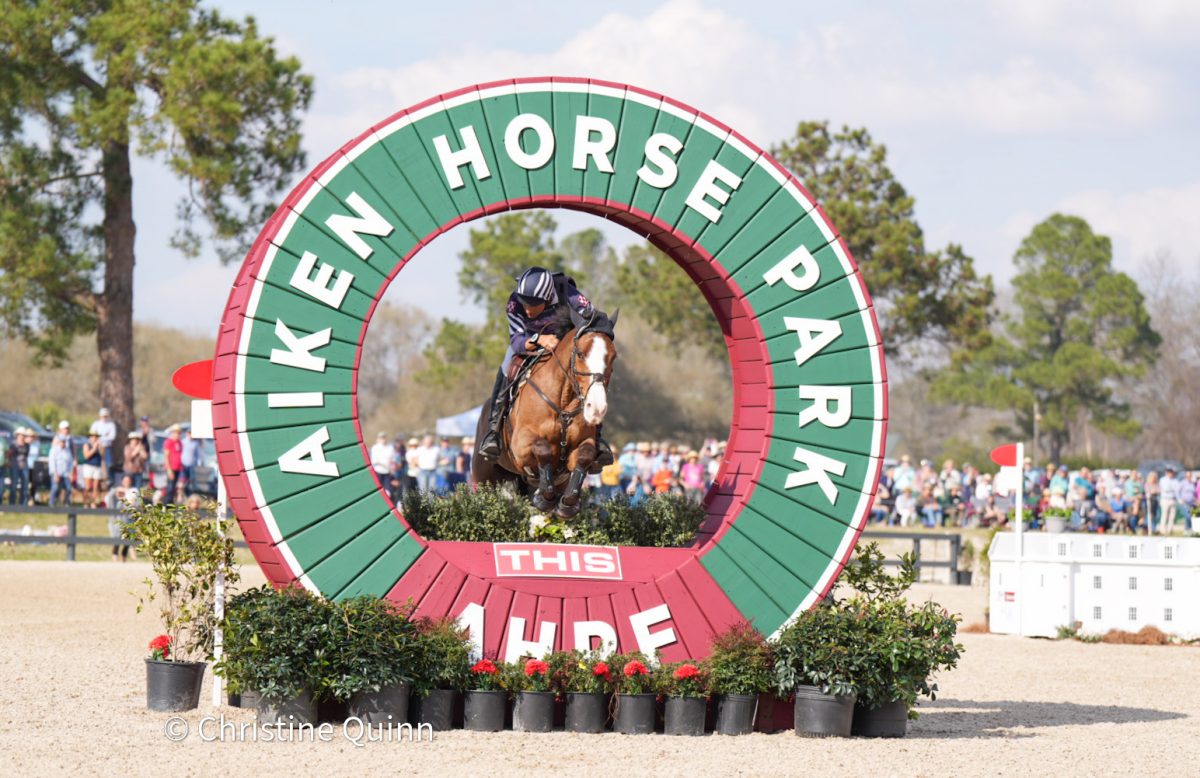 Boyd Martin and Fedarman B en route to the win. Photo by Christine Quinn Photography.

“What a privilege to ride this horse,” Boyd told Frankie Thieriot-Stutes at the end of the day. “Annie was so special to so many people especially in this community and then to bring the horse here and her fiancé and mom, dad, all her best mates are here, and the horse on top of that went like a champ…I couldn’t have hoped for better.” 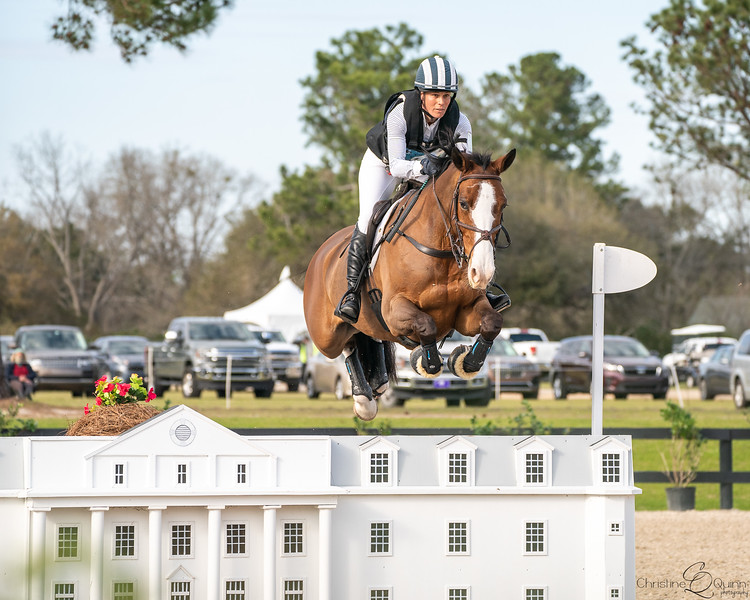 Doug Payne finished all three rides inside the top six, capping off another successful condensed format for which he’s quickly built a reputation of speed. Doug and Jessica, along with Susan Drillock, own Quantum Leap (Quite Capitol – Report to Sloopy, by Corporate Report), who with each event leaves his “baby Quantum” nickname in the dust and is the highest-placed of the trio with a third place (31.9).

Eventing fans are also happy to see Laurie McRee, Jessica Payne and Catherine Winter’s 2019 Pan American team member Starr Witness (Chello III – Carmen, by Veneur) back out on a cross country course. The 11-year-old KWPN mare collected two seconds of time but was still competitive enough to improve on her two-phase placing to end up in fourth overall (33.5).

We also got a glimpse of the Paynes’ and Debi Crowley’s Vandiver (Windfall – Visions of Grandeur, by Mystic Replica xx), entering his 18th year and 12th (!!) season at the Advanced level, who was one of Doug’s two clear rounds inside the time and wound up sixth (35.6). Together with Quantum Leap, “Quinn” will aim for the Land Rover Kentucky CCI5*, while Starr Witness will aim for the Tryon 4*-L in May.

Canada’s Colleen Loach also enjoyed a banner weekend — and you’ll want to keep an eye on the two equally fetching rising stars she’s got in Peter Barry’s Vermont (Van Helsing – Hauptstutbuch Hollywood, by Heraldik xx), a 10-year-old Hanoverian who finished fifth (34.1) and FE Golden Eye (Goldfever – Cascade by Contendro), another 10-year-old who ended the weekend in seventh overall (38.7). Both of Colleen’s horses will aim for the CCI4*-L at Tryon in May as their main three-day.

Capt. Mark Phillips’ track tested concentration and rideability, winding its way in and out of the arenas and back on itself several times over its four minute, 30 second optimum time. The best rides came at a balancing point of adjustability and bravery, as the time was also influential; six out of the 16 starters (nine pairs withdrew prior to cross country) turned in clear rounds free of time faults. Problems were few, but two riders had falls (both Amanda Beale-Clement and Lillian Heard, as well as their horses, are reported to be ok as of the time of publication), one pair (Missy Miller and Quinn) retired, and another (Clayton Fredericks and FE Ophelia) were technically eliminated.

If you missed out on any of the action, never fear: H&C+ will have the full replay available for enjoyment soon — check this page.

With this event being the first to see on a live stream and attract spectators this year, it feels like the season has truly begun. It’ll be all eyes on Kentucky and Badminton as we head into these exciting coming weeks, and we’ll have all of the latest news to follow right here on EN. Thanks for following along. Go Eventing!

Oh, and before I sign off: a little “Barry” (Corvett) appreciation post you won’t want to miss: