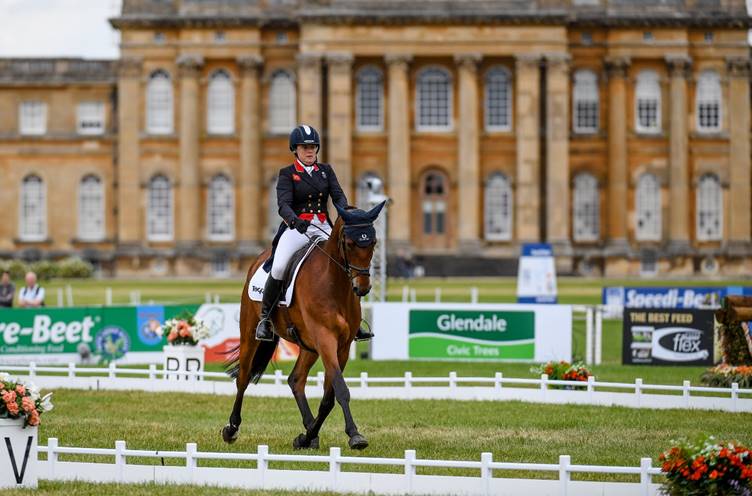 Pippa Funnell, one of Britain’s most enduring and successful event riders, has given herself an excellent chance of a fifth victory at Blenheim Palace International Horse Trials.

Riding 11-year-old Maybach, who is owned by Sweden’s SHE Eventing AB, Pippa scored a dressage mark of 27.2 to slip into fourth place on Friday afternoon in the CCI4*-L class, just two penalties behind leaders Yasmin Ingham and Banzai Du Loir.

“I’m really thrilled with him,” she said. “He’s a lovely horse, but not the most elastic in his movement, so I didn’t expect him to overtake Yasmin and (second-placed) Piggy (March).”

Pippa first won this prestigious class in 1993 aboard Metronome, and followed up in 1995 aboard Bits And Pieces, in 2003 (Jurassic Rising) and 2004 (Viceroy II). A veteran of British teams, with 12 senior medals to her name at Olympic, World and European Championships, she also won the Rolex Grand Slam in 2003.

Pippa added: “It is fantastic to have The Jockey Club (who are organising Blenheim Palace International Horse Trials for the first time) involved in eventing and bringing two forms of horse sport closer together.

“And it’s great to have lots of spectators once again — it feels like they are as glad to be out as we are, and the atmosphere they create is something we have really missed. Cross-country day tomorrow will be fun — if it goes well!”

Ros, who has held on to her first-day lead in the CCI4*-S class, said: “It is much busier here today than it was yesterday, and I think Lordships Graffalo felt the atmosphere more than ever before. It’s great experience for young horses and stands them in good stead for the future.

“I think the cross-country course is lovely, and the more times I walk it, the cleverer I think (course-designer) David Evans has been.”

Izzy, whose Bicester yard is just minutes from Blenheim Palace, scored 28.9 on Camilla Behrens’ nine-year-old. She is only 2.3 penalties behind first-placed Ros Canter (Izilot DHI), whose mark of 26.6 remained unbeatable on the second day of dressage.

Speaking afterwards she said: “He was a little bit nervous and held his breath in his trotwork, but he’s got a fantastic walk, which the judges rewarded, and a very good canter, so he pulled it back again.

“He just needs to be a bit proud of himself, which will come with experience. He only started eventing two years ago so he hasn’t done a massive amount for his age, but he’s very exciting, and generally a very good jumper, so hopefully he has it all.”

Izzy won at Blenheim Palace International Horse Trials in 2017 with Be Touchable, and first rode here as a child in the Pony Club team show jumping competition.

She is due to represent Britain at the European Championships in Switzerland next week with Monkeying Around, who led the dressage in the CCI4*-L at Blenheim Palace the last time the event ran in 2019.

One of the great unique selling points of the sport of eventing is the fascinating breadth of experience that may be encompassed in a single competition. Blenheim Palace is no exception and, as well as Izzy, the field contains a host of experienced past winners including Andrew Nicholson, Pippa Funnell, Polly Stockton and Piggy French, plus Olympic gold medallists Oliver Townend and Tom McEwen, as well as those for whom Blenheim represents the fulfilment of an ambition.

Georgia Bartlett, 20, a CCI3*-S winner at Cornbury Park last year and former member of the British Junior squad, is realising a long-held goal in competing her first horse after graduating from pony classes, Spano De Nazca, in the CCI4*-L.

And she explained: “I only live locally, near Newbury, and have been coming to Blenheim as a spectator for years, so it has always been a dream to ride here.”

This is only the pair’s third competition this year after setbacks for horse and rider. Georgia broke her arm in a fall and her Spano de Nazca suffered a stone bruise and has been regaining fitness by swimming at racehorse trainer Warren Greatrex’s Lambourn yard.

Georgia added: “We have such a strong partnership and I am hoping that the cross-country course will suit him and that our fitness regime will have paid off.”

Emma Thomas, 22, is another relatively local rider, a member of the Warwickshire Hunt and Pony Club branch. She is competing in the CCI4*-S on Icarus, a Dutch-bred gelding bought from showjumper Jamie Wingrave, and in the CCI4*-L on The Buzz Factor.

Emma, who will be walking the cross-country course with Pippa Funnell and Caroline Moore, is studying for a Masters in bio-informatics at the Royal Veterinary College.

Referring to her compact 15.2hh Icarus, she said: “He’s a cross-country machine. I think this is just his course with the open distances.”

For the USA in the CCI4*-L, Katherine Coleman sits 23rd with Monbeg Senna and 51st with RLE Limbo Kaiser. Tiana Coudray is 40th with Cancaras Girl. In the CCI4*-S 8/9-y/o Grace Taylor is 9th with Game Changer and 17th with Hiarado.