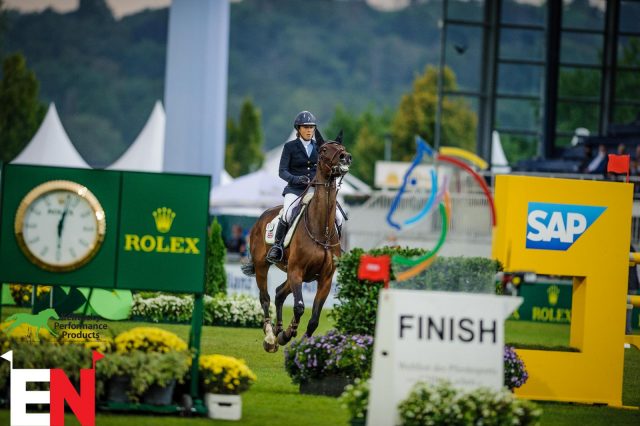 There’s a lot going on in the main arena, but total focus pays dividends, as Kirsty Chabert and Classic VI discover. Photo by Tilly Berendt.

There’s nothing quite like the adrenaline rush of Aachen, with its main stadium like a gladiator’s last hurrah and its inescapable glitz and glamour. That adrenaline rush, of course, is doubled when its organising team of cackling Germans decides to put eventing’s dressage and showjumping phases on the same day, with nary a couple of hours between them, simply to watch us all scramble and sweat to try to pump some kind of information out to the world. Is there a livestream simply showing panicking journalists? If so, how do we apply for the commentary job? “And as we tick into the forty-seventh minute, we see this contender reach a critical decision point: opt for a tactical food break or attempt to push through the brain fog in favour of an extra batch of quote transcriptions? Ahh, and we see the athlete in question take the latter option! She’s having a Tic Tac for lunch! Just one! Will it work in her favour or will we catch her chewing on a table leg and weeping in twenty minutes? Only time will tell, folks.”

Wait, sorry, you came here for showjumping updates? I was too busy slavering over the furniture to register that, sorry. But let’s get this crazy train back on the rails, folks, because showjumping came, it saw, it conquered, and now everyone is contemplating some kind of wide-scale emotional breakdown. That’s just a guess, for what it’s worth.

Aachen always builds a tough showjumping course — unsurprisingly, when you consider that it’s one of pure jumping’s most iconic and notoriously difficult venues. Even for the eventers, Frank Rothenburger‘s courses are technical and tough, and they make best use of that capacious main arena, which means there’s a lot of ground to cover and an atmosphere that’s pretty well unparalleled in our sport. Tonight, the pivotal second phase got underway as the sun set in spectacular fashion, and so our competitors jumped under the lights and surrounded by huge TV screens, which made it all too easy for horses to get distracted or backed off by the task at hand. A lot could — and did — go wrong.

But when it goes right? “It feels spectacular,” gushes Great Britain’s Emilie Chandler, who recorded one of the first clears of the evening with her five-star horse Gortfadda Diamond and was able to sit back and watch as everything changed around her, pushing her up into eventual fourth place — and what would have been the overnight lead, but for the 1.2 time penalties she added.

That’s the thing with this phase at this venue — it’s not just about the poles, though they do topple with extraordinary ease, as 29 of the 39 competitors discovered. It’s also about the time, which can so easily run away with you as you navigate your way around what feels like acres of space. With just one rail covering third to fifteenth place after dressage, there was remarkably little wiggle room, and it didn’t take much going wrong for a seismic shift to occur across the leaderboard. Just three combinations — Team USA’s Will Coleman and Off The Record, Japan’s Yoshi Oiwa and Calle 44, and Ireland’s Esib Power and Azure — managed clear rounds without any time penalties, allowing all three to make huge moves. 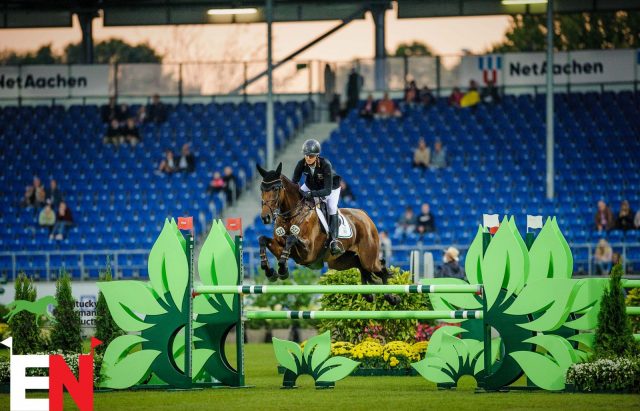 Sophie Leube and Jadore Moi pop through the influential triple combination at the tail end of the course. Photo by Tilly Berendt.

Helping them along? The problems at the top. Two shock rails fell apiece for dressage leader Sophie Leube and Jadore Moi, competing for the home country, and second-placed Tamie Smith and Mai Baum, one of the best showjumping pairs in the field, amid anguished groans from the audience. This pushed them into ninth and eleventh places, respectively, but it wasn’t the only drama at the top. A solitary rail fell — and the clock ticked over by one second — for France’s Gireg le Coz and Aisprit de la Loge, who slipped from third place down to eighth, and fourth-place Laura Collett and Mr Bass dropped a rail to move into seventh. 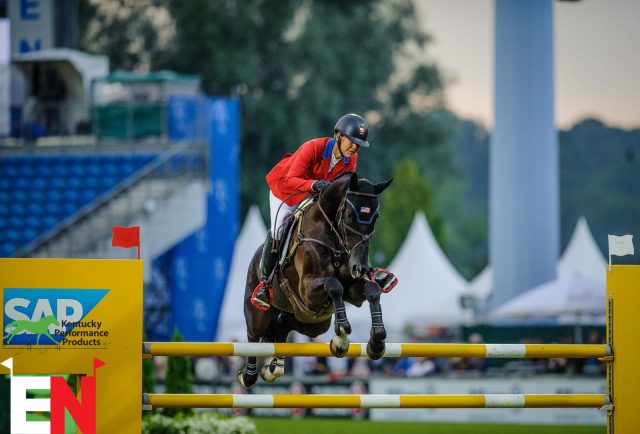 That opened the door for significant top-end movement — an open door that British rider Kirsty Chabert and her 12-year-old British-bred mare Classic VI (Calvaro FC x India Summer) took full advantage of. Though they didn’t quite join the ranks of the penalty-free, it wasn’t for lack of trying: Kirsty landed from the final fence with such an extraordinary burst of momentum that their 0.4 time penalty was awarded for adding just five one-hundredths of a second to the 80 second optimum time. But nonetheless, she was still able to catapult herself into the lead from her post-dressage placing of equal seventh. 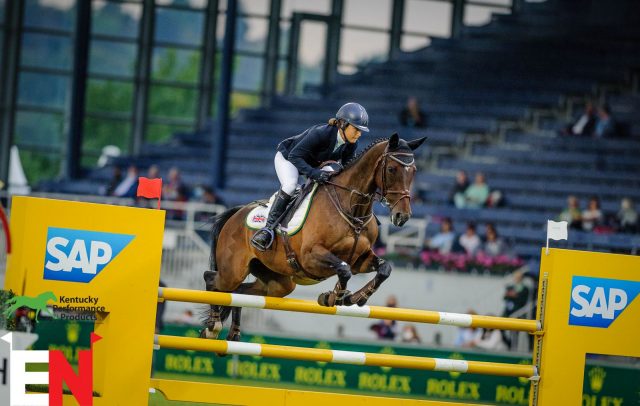 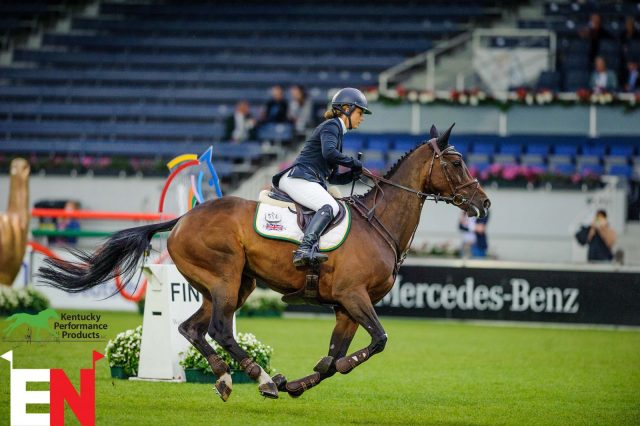 …and gallops through the finish line to take the overnight lead. Photo by Tilly Berendt.

That ‘equal’ remains vitally important: both Kirsty and Classic and fellow Brits Laura Collett and Dacapo earned a first-phase score of 29.1 to share a spot on the leaderboard, and both jumped clear rounds with 0.4 time penalties to finish the second phase on 29.5, though Laura stopped the clock nearly a full second over the optimum time and, as such, moves into second place for being further from that 80 second threshold. 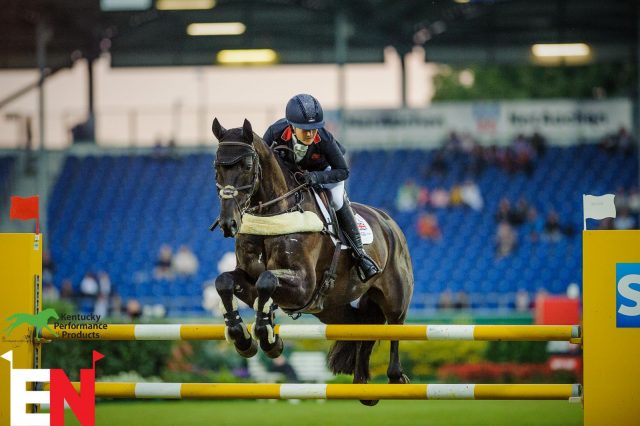 Laura Collett and Dacapo slot into technical second place on the same score as the overnight leaders. Photo by Tilly Berendt.

Though it might cause some passing frustration to British chef d’equipe that Laura’s clear came aboard Dacapo, rather than team horse Mr Bass, that’ll surely be a fleeting feeling: Mr Bass, who was fourth after dressage on 28.2, added just one rare rail and sits in seventh overnight, which gives the British team three riders in the top ten and puts them on an aggregate score of 91.6 after dropping the score of Zara Tindall and Class Affair. That’s a pretty healthy lead for them to maintain, but now, it’s not Team New Zealand that’s hot on their heels — it’s Team USA, sitting second on 98.1 after excellent clears by Will Coleman and Off The Record and Ariel Grald and Leamore Master Plan. 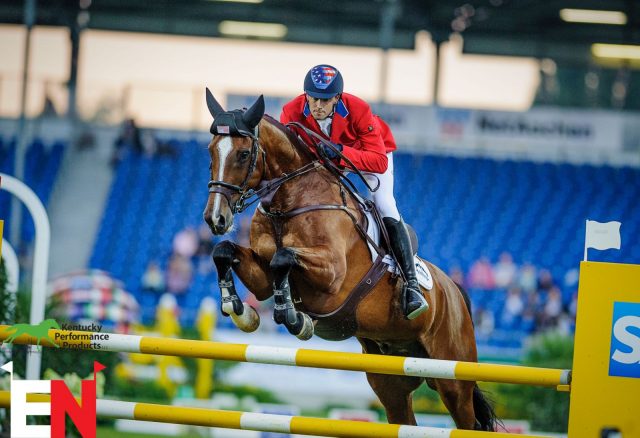 Will Coleman and Off The Record produce one of just three completely penalty-free rounds to move into third place individually. Photo by Tilly Berendt.

For Will, that foot-perfect round — which was one of just three to add neither jumping nor time penalties — doesn’t just help his team, nor is it simply a leap up the leaderboard for his individual chances, though they certainly look sunny after moving from eleventh to third place. Even more than that, it feels a bit like watching a redemption arc for the 12-year-old Irish Sport Horse, who’s ordinarily a reliable showjumper but tipped a rail on his last trip across the pond, at Tattersalls CCI4*-L in 2019, costing Will the win in the class for the second time in his career. Now, on the horse’s second competitive outing to Europe, he’s got the pesky poles behind him and can head into tomorrow’s tough, technical, intense cross-country challenge confident in the knowledge that this is where he truly shines. 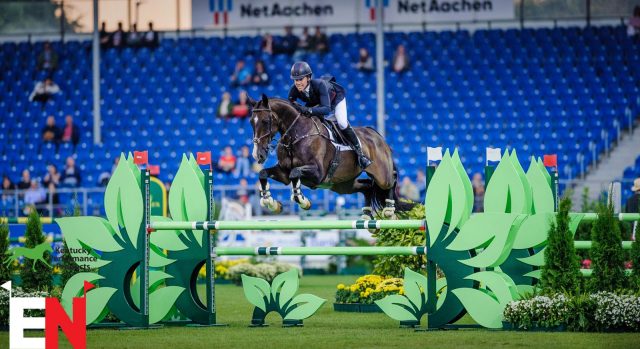 Event horse or hunter derby champion? Ariel Grald and Leamore Master Plan demonstrate a textbook set of knees over the last element of the treble. Photo by Tilly Berendt.

And for Ariel? Although Leamore Master Plan‘s Irish brain and lanky body mean that the first-phase scores aren’t where the undoubtedly will be over the next couple of seasons, he’s proven already this season that he’s well on his way to becoming an excellent showjumper: he delivered one of the rounds of the day at Luhmühlen CCI5* back in June, earning third place at a venue that’s known for its extraordinarily tough showjumping tracks. Today, he showed that same class and scope, and Ariel made great use of his long stride to eat up the distances in the ring. They ultimately added 0.4 time penalties, but would climb from 28th to 16th. 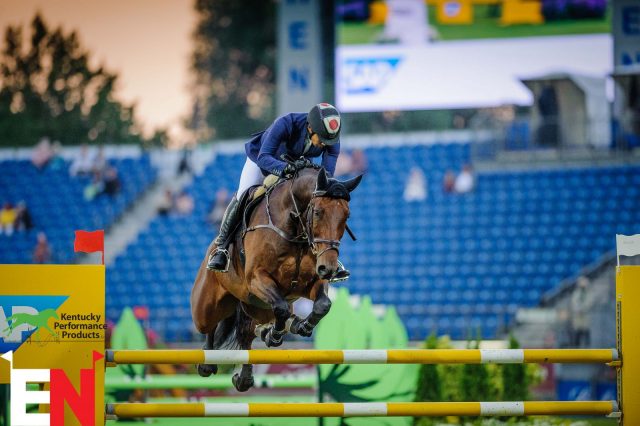 Yoshiaki Oiwa and Calle 44 move into the top ten. Photo by Tilly Berendt.

Two more riders were able to make significant strides into the top ten off the back of excellent clear rounds: Japan‘s Yoshiaki Oiwa and Calle 44, rerouting after a tricky Tokyo, added nothing to their dressage score of 30 and climbed from twelfth place to fifth, while Germany’s Andreas Ostholt and Corvette 31 added 1.2 time penalties to move from fourteenth to sixth. 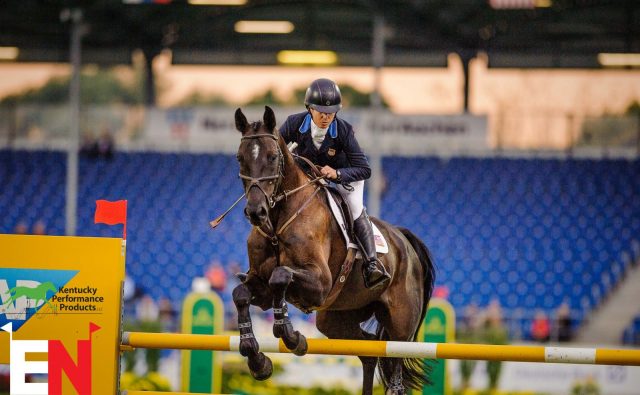 Both Lauren Nicholson and Vermiculus and Sydney Elliott and QC Diamantaire tipped a solitary pole and added a smattering of time, putting them into 24th and 27th places respectively as we head into tomorrow’s cross-country. And what can we expect there? Well, intensity, in a word — Rüdiger Schwarz‘s courses are known for building in technicality as they go, and by the time you reach the halfway point, you can reasonably expect not to see a let-up until you cross the finish line in the main arena. To add to the challenge? Plenty of distractions, once again, from colourful branding to enthusiastic spectators. The time is also notoriously hard to catch, which we’re expecting to play a major role in tomorrow’s leaderboard: a single time penalty would push our leaders down to fourth place at best, and just eight seconds spans the entirety of the top ten. You’ll be able to watch the entirety of the action via ClipMyHorse.TV from 9.00 a.m. local time/8.00 a.m. BST/3.00 a.m. Eastern, or, if you don’t much fancy staying up until the silly hours to watch horses (sorry, but who are you, you strange, sane person?), then join us after the fact right here on EN for a full report on all the action, more photos than you can shake a jumping bat at, and probably a few more Tic Tacs. Until then, friends, Go Eventing!

The team standings going into the final phase. 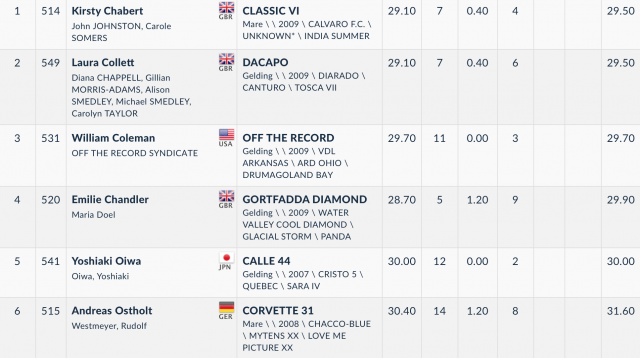