The first day of dressage in the NAF Virtual Eventing 5* was jam-packed with famous faces from around the world, with representatives of seven different nations heading down their respective centrelines as they competed from home, while comedic commentary duo Pammy Hutton and Spencer Sturmey led the day’s proceedings.

Doing a dressage test in a familiar setting, without the atmosphere of a full house, might seem like dream circumstances for eventing folk, but today’s competition was no walk in the park – we saw some moments of serious tension, an elimination (hey Spencer Sturmey, you silly boy – you’re not meant to take a call midway through your test!) and one surprising instance of mid-test horse swapping from Tom Crisp.

Absolutely delighted Sandman produced a stunning test to take the top spot on a 26.3 on day 1 of dressage 😁 he is a pleasure to ride and I’m so lucky to ride him. ❤️ a big thank you to his owners Sue Davies and Janette Chinn. Lots more amazing combinations to come tomorrow for dressage day 2, make sure you’re watching! Followed by XC & SJ over the weekend! Another huge thank you to my amazing team for helping me with this, Sandman was looking stunning 😍, and to all of my incredible supporters both 🇬🇧 and 🇮🇲 – you rock!! 💥 THE BIGGEST well done to Virtual Eventing for doing such a brilliant job putting this together 👏🏼 Please keep the donations rolling in, our total overall is over £110,000 😮 – THANK YOU! Link in bio!

At the end of the day, young gun Yasmin Ingham leads the way with the former Pippa Funnell ride Sandman 7 after scoring an impressive 26.3 from the socially-distant ground jury of Annabel Scrimgeour, Les Smith, and Jane Tolley. This allowed them to squeak ahead of dressage dynamos Gemma Tattersall and Quicklook V, who sit a whisper behind them in second place on 26.4 at the culmination of day one.

“I’m so happy to be the overnight leader at Virtual Eventing,” says Yas, who hails from the Isle of Man but is now based in Cheshire. This marks her first time performing this test with Sandman 7; she made her five-star debut in 2018 at Pau, but rode Nightline on that occasion. Her step up into senior competition is a promising one: she’s won every under-25 British title going, and is the current reigning British under-25 champion, having finished second to Ireland’s Cathal Daniels at Bramham last season.

WE'VE GOT A NEW LEADER! 👑 As we arrive at our third and final break of the day, the talented young rider from the Isle of Man, @yasmin_ingham_ & Sandman 7 take lead after a stunning performance for a well-deserved mark of 26.3. Just 0.1 of a mark ahead of @gemma_tattersall Don’t forget that all our riders and our charities would love your support with their fundraising efforts for covid-19 charities around the world. 🌍 🙏 Please do help, no matter how big or small. Head over to our JustGiving Page below to donate 👇 🔗https://uk.virginmoneygiving.com/fundraiser-display/showROSomeoneSpecialPage?pageId=1157025 . . . #donate #forcharity #nhs #doctors #nurses #getinvolved #virtualeventing #herewego #partygettingstarted #eventing #professionalriders #poweredbynaf #naf #naffivestar #fivestarcompetition #juniors #potd #gif #eventing #eventingunited #eventingnation #horses #horsesofinstagram #greatbritish #riders

Though with Nightline she’s proven herself plenty capable of producing her own horses, Sandman isn’t the first horse she’s taken on that was previously ridden by a major name. She previously campaigned former Mary King rides Fernhill Urco and Imperial Cavalier, who helped her gain experience at the junior level. It would appear that riding both horses also made her impervious to this unique sort of pressure.

“I knew Sandman did a super test, even though it’s our debut at this level together – he’s so flashy, so he obviously caught the judges’ eye,” she says.

Italy’s Vittoria Panizzon and Chequers Play the Game sit third after an impressive, fluent test late in the day earned them a score of 26.9. 2014 Badminton winners Sam Griffiths and Paulank Brockagh lead the way for the Antipodean contingent in fourth on a score of 28.6, while Holly Woodhead piloted her comeback king DHI Lupison to a 29.2 and overnight fifth.

Though the event is being held to benefit medical charities globally – and has currently raised over £110,000 – the seriously experienced ground jury wasn’t willing to give any charitable marks today. Only the denizens of the top five broke the thirty barrier, while many – including William Fox-Pitt and his 2010 Kentucky winner Cool Mountain, 9th on 34.1 – scored surprisingly low. But what did the riders have to say about their tests?

Tom’s debrief after today’s dressage at @virtualeventing • Two horses in one test – it was a surprise to us too! Looking forward to more laughs over the weekend! https://uk.virginmoneygiving.com/fundraiser-display/showROFundraiserPage?userUrl=virtualeventing&pageUrl=36

Really pleased with coppers test today. A couple of green wobbles but he has come on so much over the winter and I’m so pleased he managed to show this improvement especially in the changes although he still thinks these are quite exciting! Very happy with my best 5star Mark to date of 30.3 to lie in 6th overnight. Looking forward to the rest of the competition now. #virtualeventing, #NHS #starpony https://uk.virginmoneygiving.com/fundraiser-portal/fundraiserPage?pageId=1158289

Dressage @virtualeventing done 37.1 not too bad considering we were doing it in a sheep field. Sorry about any commentary – we thought it was going to be muted! Who knew?! We had such a good time filming and setting up – it was hilarious! Please keep donating to the NHS through the virtualeventing website! #virtualeventing @nhscharitiestogether

Judging an event like this must be something of a challenge. At an ordinary five-star – or, indeed, any international – we’d see our three judges sitting at set points around the arena (notably, an arena that exists in one place, rather than around the world as Virtual Eventing’s does!). But the ground jury, which scored the tests as they were live-streamed, could only see from the same angle that the audience could – an angle that could easily be affected by shaky filming, bright directional sunlight, or a swift change of camera. Those of you who are extra nerdy and want to see how they scored individual movements – and, indeed, if the discrepancies between them were diminished by dint of sharing a view – can look at the scores in full here.

Virtual Eventing will kick off again tomorrow at 11.05am BST/6.05am Eastern time. You’ll also be able to enjoy another day of access to the virtual trade village, which is jam-packed with great deals. In the meantime, here’s a look at the top of the leaderboard so far: 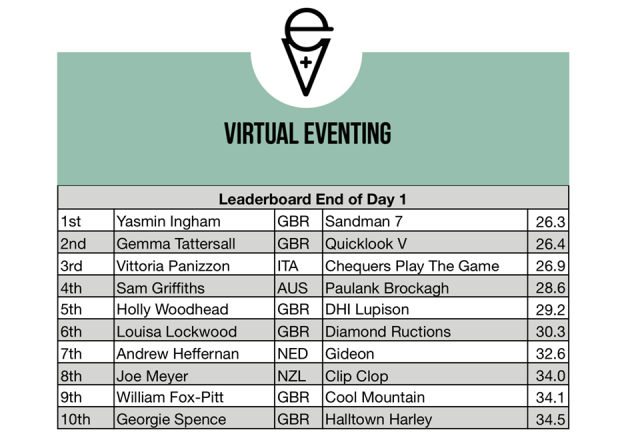 For all tomorrow’s ride times, and to rewatch today’s action, head to VirtualEventing.com.