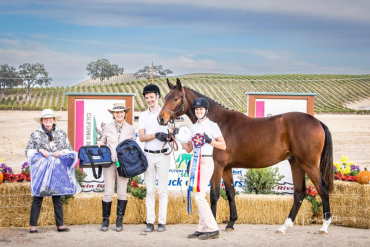 Yearlings and 2-year-olds were first presented for conformation before FEH judges Marilyn Payne from New Jersey and Katie Rocco from Massachusetts. Then, their gaits were evaluated with handlers walking their horses clockwise in a 15-meter triangle followed at the trot in a 30-meter triangle.
Cape Fear, owned by Cullum and handled by Nolan Spence, scored 87.625, the highest among the three FEH champions in 2022. East Coast champion VV-Aniyah (SGF Ahmour x Second Base), an Anglo Arab owned by Bill Payne, scored 87.57 at Loch Moy Farm in Maryland. Central champion Beatrice MRF (Barbarossa x Bayadere), a Trakehner filly owned by Elizabeth Mulroney, scored 79.12 at Haras Hacienda in Texas.

“Just to do the best we could, I just want to make the breeder proud of her line,” said Cullum, who bought Cape Fear from breeder Elizabeth Callahan. “His dad is a Holsteiner, and his mom is an off-track Thoroughbred.”

Cape Fear’s score was also the highest in the history of the West Coast championships, which were first held in 2019, and the best in any FEH championships since Oldenburg gelding Royal Casino (Rosenthal x Lady Logan) and Cynthia Gartrell finished on an 88.33 at the 2018 USEA FEH East Coast Championships.

“Winning is the ultimate goal, but I wasn’t going to be disappointed with however he did because I know how much of a great horse he is,” Cullum said. “He’s been an awesome baby for me. The breeder just did such a great job before I ever bought him.”

“I just came in wanting to give the two horses an experience,” Sterling said about High And Mighty and her other FEH 2-year-old entrant, Corona Especial (Coranado x Really Elegant). “We bred her with the full intention of the upper levels. We bred the mare [High Priestess] to Mighty Magic thinking that would be a pretty incredible event horse.” 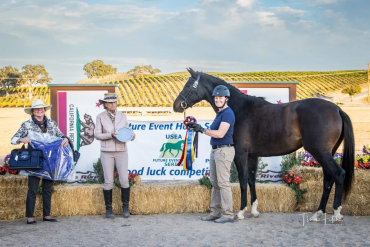 Sterling is already looking to the future.

“I love the program,” Sterling said. “I think it just brings on the horses and gives a whole balanced education. Ideally, I’ll bring her back next year for the 3-year-olds and then after that for the 4- and 5- year-olds.”

Tommy Greengard rode the two best-scoring 5-year-olds. Both Macha (Don Frederic x Com Airline), a Holsteiner mare owned by Lisa Peecook, and That’s Me Z (Take A Chance On Me Z x Venetia, a Zangersheide gelding owned by Andrea Pfeiffer, came from Germany and began competing in USEA recognized events in October at the Novice level in California ridden by Greengard. Both horses tied for the best dressage score of 16.8, which accounts for 20 percent of the overall score. Macha’s score for conformation and type was 8.0, for an overall score of 24.8. That’s Me Z’s score of 7.9 for conformation and type gave them an overall score of 24.7.

Also with a 24.7 after day one was Lowmax, a Hanoverian chestnut gelding ridden by Nicholas Cwick with four wins at the Training level at events in California in 2022.

For the YEH 4-year-olds, Cindy Hahn’s German Sport Horse Tristan (Titulus x Elaisa) is currently in first-place with a score of 23.7 ridden by Michelle Pestl.

The YEH 4-year-olds and 5-year-olds will do their jumping tests on Saturday to account for the remaining 70 percent of their score.

The FEH 4-year-olds also had their first day of competition on Friday with evaluations under saddle and for conformation before they do the jump chute on Saturday. The current leader is Arnell Sporthorses’ Dutch Warmblood gelding Nicolai Van De Heering (Hernandez TN x Candy D). The FEH 3-year-olds will also go through the jump chute on Saturday. Ride On Video will live stream Saturday’s competition.