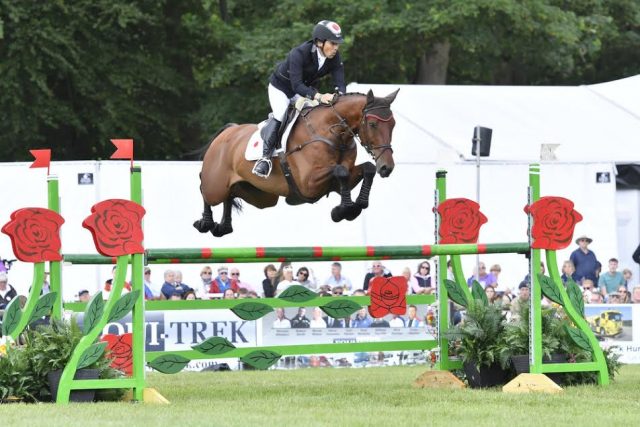 Yoshiaki Oiwa and Calle 44 at Bramham. Photo by Kit Houghton.

Representing the red and white colors of Japan, Yoshiaki Oiwa has worked tirelessly to make his goals of putting his country at the forefront of the international eventing scene a reality. “Yoshi” has now added a new highlight to his CV: CCI3* winner at the Equi-Trek Bramham International Horse Trials.

Yoshi is no stranger to success in the eventing world, most recently finishing in the top 10 at Badminton this spring with his Rio mount, The Duke of Cavan, as well as winning the CIC3* at Barroca d’Alva. He now has the most three-star wins of any Japanese rider in history, according to EquiRatings.

Calle 44 & Yoshi Oiwa win Bramham CCI3* – the first win for a Japanese rider at CCI3* level outside of Japan. pic.twitter.com/IufDu7f7cN

Yoshi got his start in eventing at a young age when he competed on a university team and was introduced to cross country. “I started riding around 10 or 11 years old as only a hobby,” Yoshi said. “Around age 14, I started riding every day and enjoying show jumping competitions. My first time eventing was for a university competition, and we had no choice but to do all three disciplines.”

Yoshi began to gravitate towards eventing as his chosen sport. He made his FEI eventing debut in 2002 with Prince Rockaway, with whom he completed his first CCI* in the top 30. His first taste of CCI4* eventing came in 2005 at Badminton with Voyou du Roc. This pair finished 11th that year, adding two seconds of time across country and 12 show jumping faults to their final score.

That began the start of a strong career at the upper levels, from winning the individual gold medal at the 2006 Asian Games with Khanjer Black, to finishing in the top 20 individually at the 2014 World Equestrian Games with Fifth Avenue Fame. Yoshi has also represented Japan at the Olympics twice: in London in 2012 with Noonday de Conde and at Rio in 2016 with The Duke of Cavan, with whom he finished 20th individually.

Yoshi bases in Germany currently and trains with Dirk Schrade, which has paid off in spades as he continues to put himself on the competitive map. This spring, Yoshi also traveled to the UK to train with Pippa Funnell in preparation for Belton and other events on the British spring circuit.

Bramham proved to be a big weekend for Calle 44, a 10-year-old Holsteiner gelding (Cristo – Sara IV, by Quebec) owned by Yoshi. It was the gelding’s first CCI3* run, so Yoshi’s intent was for him to have a solid and educational run to set him up for bigger events ahead.

“Cross country was our big challenge,” Yoshi said. “Dressage, we did our best. Of course there is more to improve there. This was his first CCI3* and I wanted to try to make good time. He jumped everything straight out without any hesitation and got more confident as he went.” 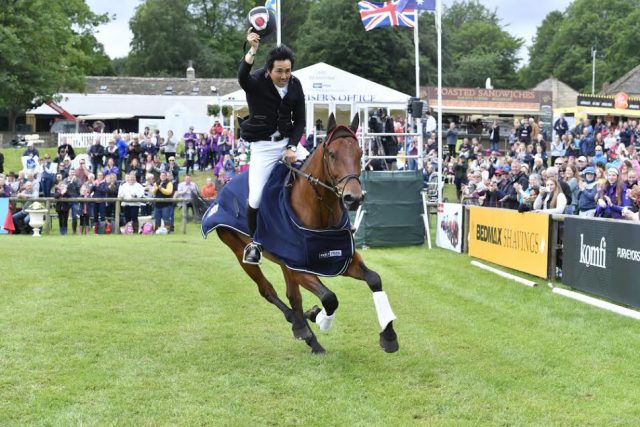 Over a tough show jumping track that shuffled the final standings, Yoshi and Calle 44 delivered one of just five faultless rounds to eventually take their first CCI3* win — and the first Bramham win for a Japanese rider in the history of the event.

Looking to the clear round that sealed the deal, Yoshi said it has been beneficial for Calle 44 to compete in pure show jumping as well, something that Yoshi does regularly. Calle 44 competed at the CSI2* and CSI3* levels for show jumping over the winter, which has lent itself to his show jumping on the eventing circuit.

“I did a few weeks of a show jumping tour before this season starter,” Yoshi said. “Calle is a very careful horse so he needs a lot of confidence. The show jumping tour was just training, so no pressure. Those relaxed rounds really helped both of us.”

Yoshi will now return to Germany to continue his preparation for the 2020 Tokyo Olympics in his home country. Looking ahead, it is important to Yoshi that he does what he can to continue putting Japanese riders on the map for equestrian sport.

Japan, as with most Asian countries, is a smaller federation without many opportunities within the country to compete in pure eventing. For 2017, Japan has just 23 riders and 30 horses registered as FEI athletes, and Yoshi says that some eventers have relocated to Europe to have more access to training.

“We only have two or three places to do cross country in Japan,” Yoshi said. “There are four (Japanese) riders based in Europe, and a few more will be coming over. At Bramham, Japan had two riders in the top five [Toshiyuki Tanaka and Talma D Allou finished in fourth place], so we are doing quite good I think. We Japanese riders want to be competitive.”

So it’s all eyes on Tokyo as Yoshi and his compatriots focus on their end goal: to represent their country on the world’s biggest stage right there in Tokyo.

“I have always wanted to tell the Japanese people that our horse sports are great,” Yoshi said, “but I’ve never had the chance. Tokyo will be a chance to show our sports at the top level. I hope that we can make a really competitive team.”