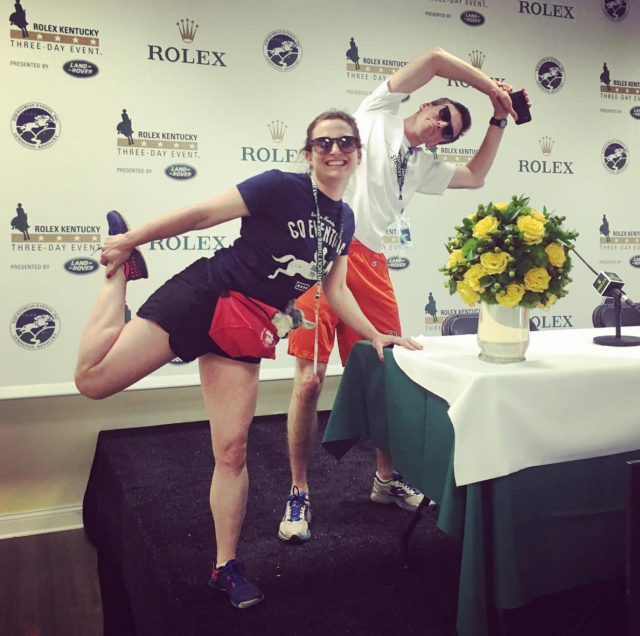 “Don’t even come back here unless you beat them.” Those were the last words John and I heard before we set out to run Rolex’s second annual RK-5K, held Friday evening at the Kentucky Horse Park. They were issued by Jenni, and I knew she meant it.

THE CHALLENGE: A match race between EN and The Chronicle of the Horse. Three members from each publication, or whatever EN is, facing off in the race of our lives, with winner to be determined by the average score of each team. 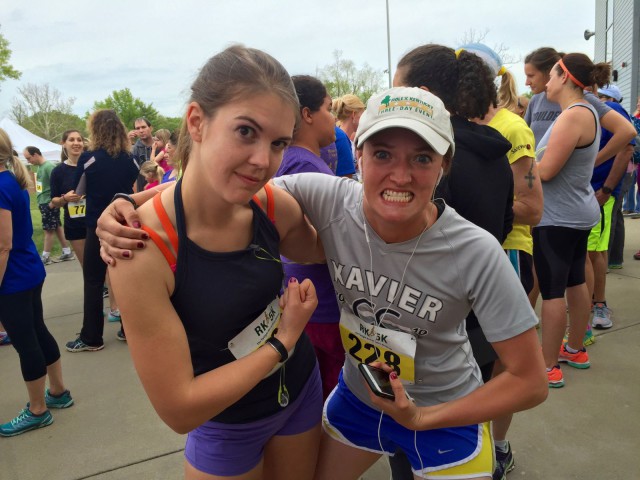 Lisa and Ann: Wouldn’t want to run into these girls in a dark alley. Photo by Leslie Wylie.

Team EN: John Thier, international man of mystery whose skill set includes using fancy computer words and changing lightbulbs without a stepladder; Leslie Wylie, professional box wine connoisseur (but I only had one glass before the 5K!); and Chinch, stuffed animal.

Putting Chinch on our squad seemed like a desperate move but everyone else on the EN crew was “too busy working” to run. Plus, I figured I could carry him in the sweet AECs fanny pack I’d picked up at the USEA booth earlier. 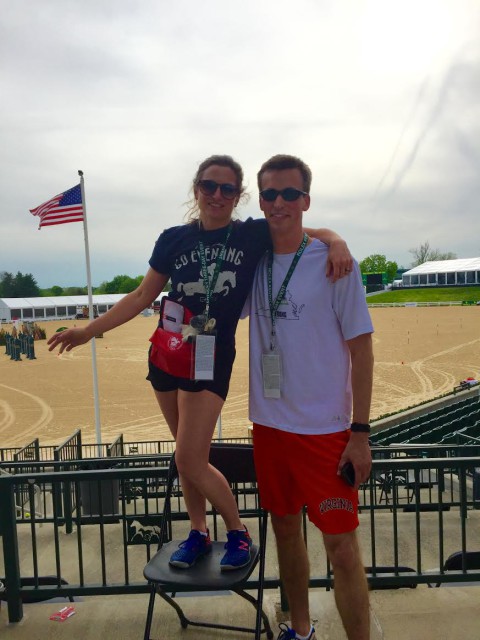 To my great disappointment, various people later pointed out that my “fanny pack” is actually an insulated lunch bag. I was wondering why it didn’t have a buckle. Photo by Cassie Rutledge.

THE PRIZE: Glory, and the losers owe the winners a beer. But mostly glory. 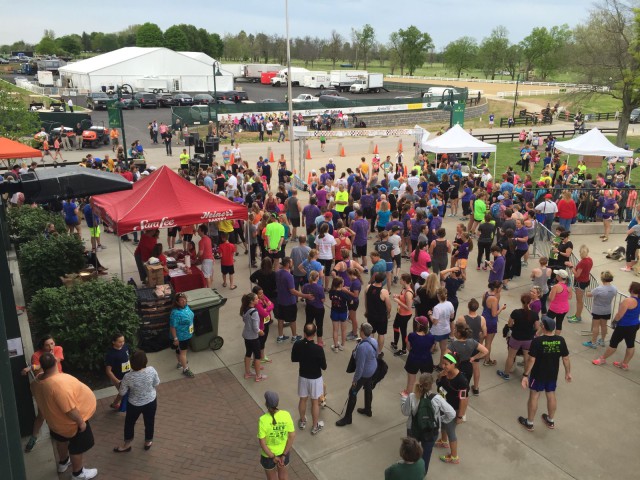 Around 700 runners turned out for the race. Photo by Leslie Wylie.

Heading toward the start at the Rolex Stadium grandstand, John and I discussed strategy.

“Let’s run fast,” John suggested, a ridiculous proposal that I immediately shot down.

John seemed skeptical but, as usual when it comes to my bad ideas, he sighed heavily and went along with it.

We arrived approximately two minutes before the start, which was just enough time for Chinch to schmooze with fans… 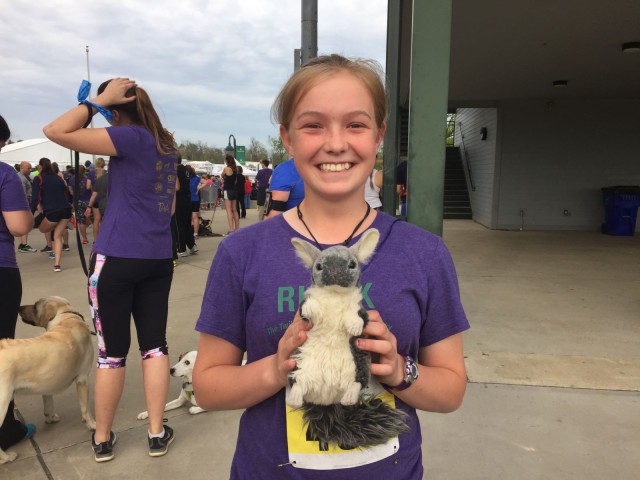 …and for me to roll my eyes at Lisa for having the Hamilton soundtrack as her running playlist. 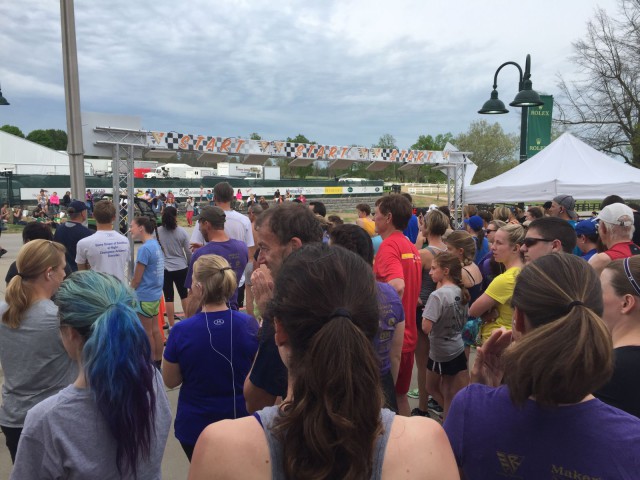 And then we were off, like racehorses from the starting gate jostling for position. I jumped in front of Ann and positioned myself directly ahead of her, like I’d seen bad-guy jockeys do in the movies, jumping from side to side when she tried to go around me.

Ann, being a significantly younger, peppier and more nimble human being than I, easily thwarted my sabotage attempt. I resorted to some more violent push-shove tactics as John looked on in embarrassment.

Just as I was approaching full-on Tonya Harding mode my lungs and legs demanded a ceasefire, leaving the door wide open for Team COTH to make its getaway. One by one they passed us by, threading their way through the crowd until they were no longer in sight. 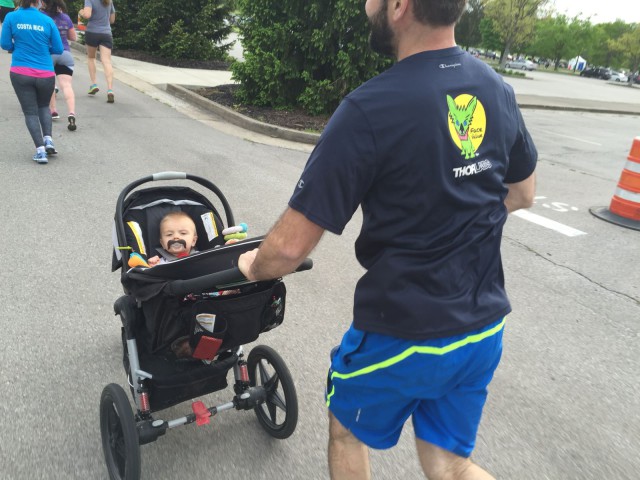 Even baby Zack slipped past with some unauthorized assistance from dad Eric. It probably should have been a blow to our ego but it’s hard to get worked up about anybody with a mustachifier in their mouth. Photo by Leslie Wylie.

To be fair, John is an athletic dude and he probably would have been right up there at the front of the pack if left to his own devices. But being the gentleman boss he is, and also probably because he doesn’t trust me, he didn’t want to leave the other two-thirds of Team EN behind.

Which was unfortunate because I wasn’t exactly doing us any favors. 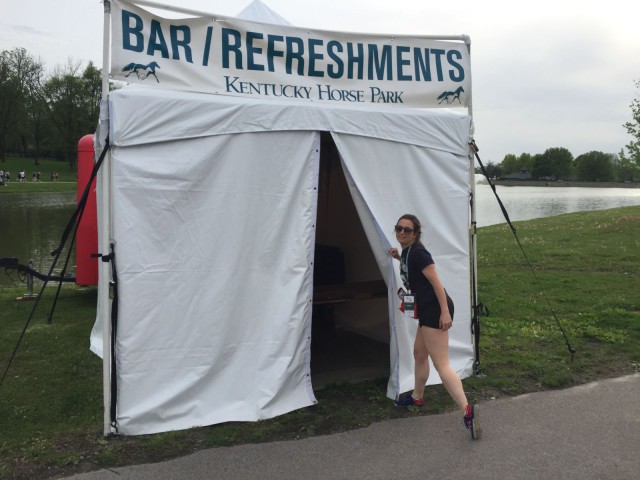 “Can I get that Kentucky Ale with a lid and a straw, please?” Photo by John Thier.

“Don’t worry,” I assured John. “We have plenty of time left to crush them.”

But the longer we ran, the more impossible our dream of  hard-earned victory became. 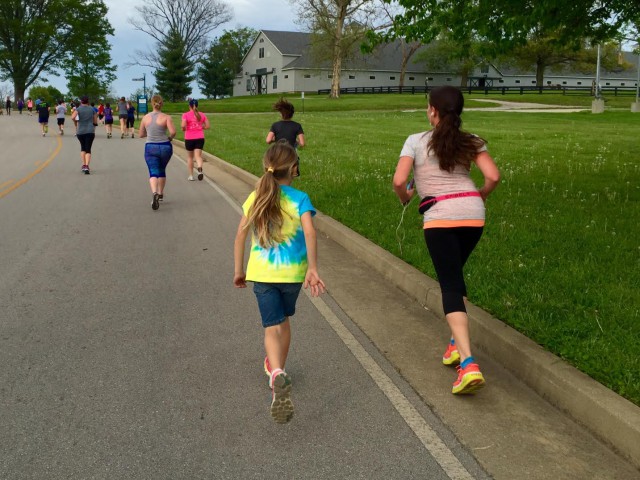 Kudos to the gal in the tie-dyed tee and lace socks — she totally left us in the dust. Photo by Leslie Wylie.

With just under a mile left to go, feeling defeated, I suddenly remembered all the garbage I’d been spouting earlier about working smart, not hard.

It was time for a shortcut.

John was hesitant — probably out of fear that Jenni would fire him from his own company — but he put his head down in shame and obeyed my command. Ignoring dirty looks from other runners we made a beeline toward one of the barns, with the intention of shaving some distance off the course. 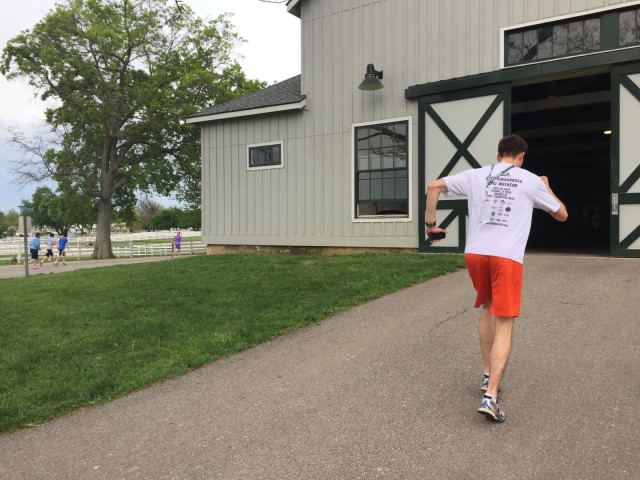 John attempting to smother his conscience with a pillow. Photo by Leslie Wylie.

… we just couldn’t do it. John’s moral resistance was no surprise, but I had come to expect more from my ruthless, tar-black soul. Was I getting soft?

“We’ve gotta go back,” I said, and John nodded. We doubled back the way we came to rejoin the swift stream of runners, further behind now than ever.

But at least we were having fun, as evidenced by this homestretch clip John filmed in the tradition of his ancient, rightfully discontinued EN series “The Worst Rolex Video Ever.”

We finished the race strong, our heads held high, our integrity intact, prepared to suffer our fate with dignity. 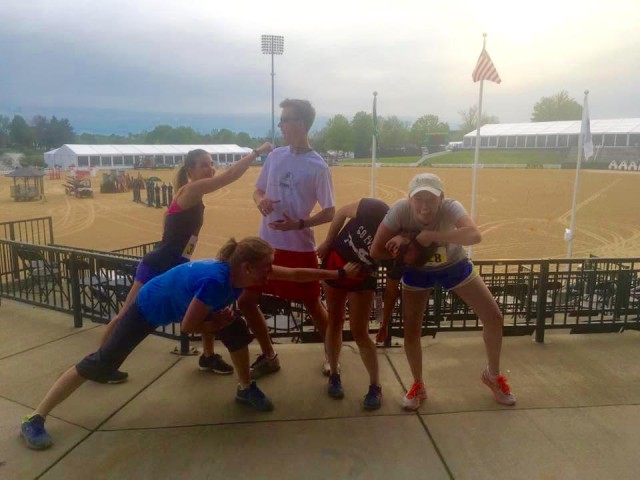 Photo courtesy of Team COTH, who I think had been out to dinner and back by the time we crossed the finish line.

Team COTH actually accepted their win with grace and class — they didn’t even post the photo above to Instagram — but honestly they were the least of our worries. We still had to report back to Jenni in the media center, who already seemed a bit put out that we were taking so long.

When we walked in, she didn’t look up from her laptop.

The staccato clack of Jenni’s fingers on the keyboard came to an abrupt stop.

I tried to frame the situation in a more positive light: “But we had a lot of heart, a lot of … sportsmanship.”

Finally Jenni spoke, looking us dead in the eye.

“You brought shame upon this family,” she said, before turning her attention back to her work.

Which is to say, COTH, we’re gonna need a rematch. Same place, same time, Rolex 2017. And this time, you’re going down.