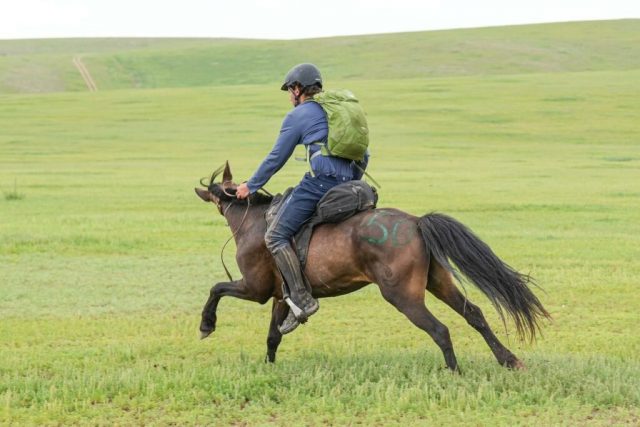 Photo courtesty of The Mongol Derby.

One of the best parts of following the Mongol Derby is the hilarity (and intensity) that ensues via The Equestrianists’ daily blogs. Each evening, the team rehashes the events of the day — and its the wild, beautiful Mongolian Steppe, a lot of sh*t happens out there — to update followers on the happenings across the 1000km/600mi track.

I pulled a few quotes from the past few days’ blogs to give you a glimpse — you may not find them as hilarious as I did, but they certainly up the fan experience for me!

Note, riders are referred to in the blogs by initials – you can find a full rider list here and a live tracking map here.

Expect more finishers today and tomorrow as the race wraps up.

“After yesterday’s damp start, riders awoke this morning to another sunny day on the steppe. This may sound more appealing to those of us sat at home, but spells trouble for the riders: the hotter it is, the more watering holes you need to find for your noble steeds, and for yourself. Heart rates are higher, everyone’s hot and bothered and riders begin to smell a little “ripe”, according to some vets at HS19 (which at this stage of their stint on the steppe we imagine is a little rich coming from them).”

“CWA shared some of his horse selection tips this evening: ask the herder, obey them unless in strong disagreement, and take a look from behind. If belly is wider than bum, they’re a bit too porky for this gig.”

“Tobias Endress (TEN) was looking a little lovestruck out on the steppe today, spotted at HS17 clinging somewhat possessively to a majestic chestnut beast who had ferried him there from HS16. His tips for those looking for love? “Listen to the herder…He saw me and pointed at this horse. It was a match made in heaven.” TED vetted out safely and was soon reluctantly prised away from his new beau to head to the horse lines in search of a replacement.”

“TAT experienced a bit of equine melodrama, wisely electing to return her first pick to the horse lines, a fiesty palomino with a bit of an aversion to being saddled. Moving on to a spicy grey, her first attempt at mounting ended in a swift bump back down to earth. Entirely unfazed and clearly tough as nails, she clambered back on and exploded out of HS17, travelling at quite the pace to HS18. This lady has an eye for the firecrackers.” 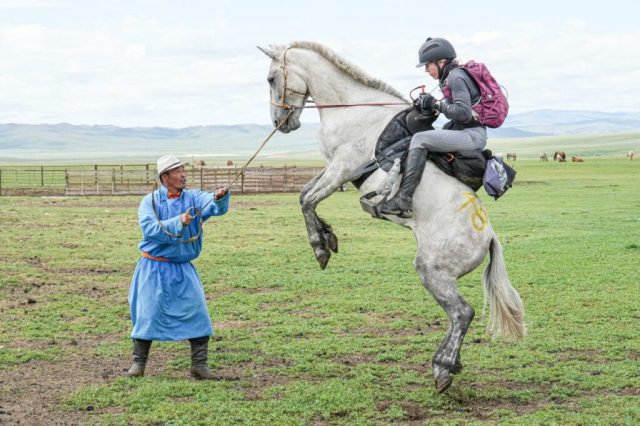 Photo courtesy of The Mongol Derby.

“By the time SEN, HFA, FHA and KDA arrived, the scene was a little chaotic. A herder was galloping furiously around the horse lines attempting to collar a loose horse, just as the group rode in. Nothing to see here, ladies.”

“BDO continues to defy medical expectations and sensible advice on her “roughest day yet” as she traverses the steppe with a boundless grim determination and a set of broken ribs, MFI is now rocking a fetching purple broken thumb, and Annie Hackett’s (AHA) knee appears to have come up against some sort of emergency cheese grater stashed in her jodhpurs. Hump day indeed.”

“Lena Haug (LHA) was pleased with her choice of horse, eyeing him up as the herder presented him to his jockey: “Looks like a sweet boy, a little wild in the eye, I’m excited,” blissfully ignorant to the sounds of her steed snorting like a dragon out of shot. Heidi Falzon (HFA) meanwhile was beaming while standing unusually close to a beast which looked like he had trotted straight out of the ice age, such was his resemblance to a Prezwalski’s horse of old. His temperament did suggest he’d been around the block once or twice, standing docile as a lamb while HFA took full advantage of finally coming into contact with a horse allowing himself to be cuddled. The hope was that he would, however, transform into a “little rocket” as soon as she clambered onboard.”

“Renee Senter (RSE) and Julie Wolfert (JWO) were feeling positive, although they appeared slightly confused about which day it was and were unable to elaborate on their navigational tactics beyond going “the right way.” Pressed on their masterplan, they divulged that this involved heading “whichever way all the other riders go.” They have apparently learned their lesson from yesterday after their sightseeing tour en route into HS11, and have graciously decided to give their fellow riders a chance to shine in the navigational department.” 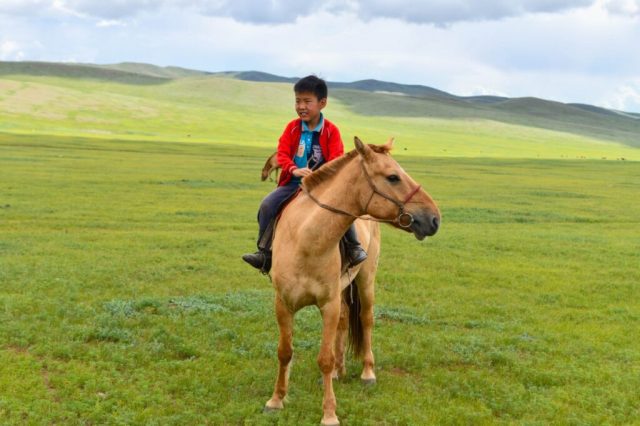 Photo courtesy of The Mongol Derby.

“2019 Mongol Derby veteran MFE woke up on his birthday (our third Derby birthday so far – we can’t really think of anywhere we’d rather spend the day either) to a stroke of extraordinary luck: after losing his horse complete with all his gear outside of HS7 yesterday, a herder appeared as if by magic, dragging the reluctant steed in his wake. He was later spotted trundling towards HS10 at a brisk trot, grinning from ear to ear on an improbably chunky but businesslike chestnut. Happy Birthday, MFE: the Derby Gods are smiling on you.”

“KGA was spotted ripping across the steppe towards HS9 on a little grey rocket, her cowgirl antics from yesterday having done her no harm. She remains committed to picking the buckiest broncos of the bunch, charming herder after herder with her suicidal enthusiasm.”

“CWA and PHE waited until HS12 to make their move: suddenly, they broke away from the pack, and wasted no time in legging it to HS13, trying to put some distance between them and their stunned former riding buddies. Word on the steppe is the odour emanating from PHE’s boots may be enough to keep the chasing pack at bay. Ingenious tactics.”

To keep up with more daily blogs like these, click here and don’t forget to tune in to see who takes home the coveted top prize of surviving!