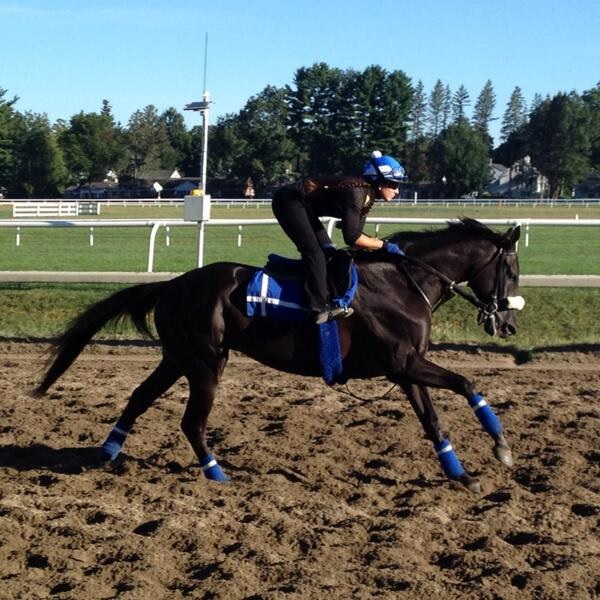 Eblouissante is a 5-year-old half-sister to the great race mare Zenyatta. She made just a few starts on the track for trainer John Shirreffs before her owner/breeder Eric Kronfeld sadly passed away from cancer in 2013. Kronfield’s bloodstock was dispersed at the 2013 Keeneland November sale, and Eblouissante’s trainer and exercise rider were sad to see her leave. The story has a happy ending, however, as one of Shirreff’s other clients purchased her and sent her back in training.

Eblouissante has the benefit of a partnership with her very educated exercise rider, Jacqueline Kandalaft-Gomez. From The Bloodhorse:

Eblouissante accepts the bit and moves in a lovely frame that clearly demonstrates the principles quietly applied by her capable exercise rider.

British-born Jacqueline Kandalaft-Gomez imparts the basic dressage tenets of lightness, acceptance, balance, straightness, and impulsion to all of the young Thoroughbreds she exercises for trainer John Shirreffs. The regular exercise rider for 17-hand Eblouissante, along with the stakes winner Mr. Commons and other Shirreffs runners, Kandalaft-Gomez, 39, joined the renowned trainer’s barn in California nearly three years ago.

The story goes into detail about Jacqueline’s start with racehorses and how her dressage background allows her to be an effective rider at the track. It’s a great article to read from the Bloodhorse. [More]