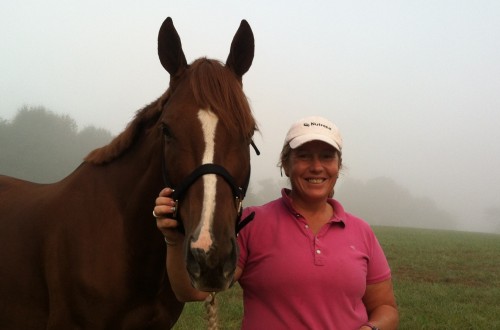 Becky was at Windridge Farm H.T. (Mooresboro, NC) this weekend competing Telperion, an up-and-coming OTTB with whom she finished third in Open Prelim. I caught up with her while she was out grazing Telperion on cross-country morning and she very graciously agreed to answer a few questions for her many fans here at Eventing Nation.

If you could take a spin on any horse, past or present, who would it be?

I’d want my horse back: Courageous Comet. We had some pretty significant offers on him through the years and after much soul searching my husband finally asked me, “So, if you had all that money what what you do?”And I said I’d go out and buy my horse back. There was nothing like trotting out of the barn first thing in the morning with Comet and his happy feet. It was a long relationship. The horse before him, Highland Hogan, who was another off-the-track thoroughbred, he had a 10-year career as well.  I’ve been really lucky to partner up with one horse at a time and get married to them in a way and see how far they can go–and boy, they teach you a lot with all their quirks and strengths and weaknesses.

What is your favorite cross-country course in the world?

Just for the overall feeling of it and because I have such great memories I would have to say Rolex. I’ve been around Burghley and it is daunting and amazing and the crowds are huge, and Hong Kong had its own feel to it with the golf course and all that, but there’s nothing like galloping up those hills in Kentucky and into the crowd at the Head of the Lake. I’ll never forget the WEG where the crowd was screaming so loud for Comet that I couldn’t hear the beeping of my watch. It was an incredible, incredible feeling. I was halfway up over that island in the middle of the water and the roar of the crowd, like, levitated us up into the air. That was nuts. That was crazy.

Do you remember your very first event?

I was sort of a wild hellion of a child who got into trouble at the military stables where I was always riding. A general’s wife caught me jumping out of a paddock, down a hill into an arena and over a wheelbarrow or something ridiculous when I was 12. She threatened to suspend me from the military stables and called my parents and the whole nine yards. I dodged her for about a week and about a week later she showed up and gave me the paperwork for the then-USCTA, the United States Combined Training Association. And she said, “I think you ought to look at this paperwork because this is a sport that encourages that type of behavior.” She talked me into Pony Club and signed me up for their combined training rally. Well, then I had to enter this whole new world of dressage. I was just a wild foxhunting child and I absolutely hated it. I threw up right before I went in the ring. I had this little appaloosa who would go down the centerline and stick his head straight up in the air and gap his mouth, and that’s pretty much how our dressage test started. The cross-country was at the old Bridlespur Pony Club in St. Louis. This was before speed penalties, and I had the pride of being the fastest horse around. Then there was the whole new world of the Omnibus. From there forward, once I had an Omnibus, my world was planned–much to my parents’ chagrin.

Do you get nervous in the startbox?

I don’t so much in the startbox. My husband, who was a military pilot–flew U-2s, flew into hurricanes, flew C-I30s–he’s really funny and has a great way of wrapping things into one little sentence. He always gives us this pep talk before cross-country. He says, “You know that fence I’m worried about?” And I’m like, “Which fence is that?” And he says, “The next one.” You try to stay in the moment. The worst bit is waiting to get on, especially if you have a late in the division ride time. But then you have a job. First job: walk down to the startbox. Second job… and so on and so forth. So once you get to that that three-minute part of it and the countdown you sort of have to kind of go into a zone and believe in your plan. I’m not an innately brave person but I really believe in my training and my schooling and in being able to tackle things one jump at a time. So that’s what I think about in the box more than anything.

When you’re not riding, what are you doing?

Putzing around my farm, playing with my dog, playing with my husband who’s got a tractor on the farm and cuts all sorts of trails in this ridiculous swamp we have in the bottomlands in Georgia. We like to go into the city and see plays although we haven’t done much of that lately. Recently I’ve been dubbed a “farm potato” by my girls because if I can talk them into doing my grocery shopping for me and taking my dry cleaning then I can go weeks without leaving the farm unless it’s a horse show.

Do you have any pets?

I have an amazing dog. Scrappy Doo is a little furry Benji-type dog who is sort of the ambassador of the barn–you can’t meet him without smiling. He’s at home this weekend guarding the farm with my husband, riding on the ATV and business as usual. We got him at Fair Hill 10 years ago as a little puppy. He is an unpurposed mutt cross and he has been the best dog ever.

In the summer do you ever wish you hadn’t moved to Georgia?

Actually not at all. It’s funny–I grew up in Kansas and to be kind of on that middle line, it’s similar to when I was in Middleburg for a while. That was the coldest winter I ever spent in my life because it’s set up for the nice weather and then everybody goes south. So you’re outside, there aren’t many indoor arenas, and the ones there are aren’t attached to barns. I did Minnesota in minus-20 but the barns are heated to 32. You come in, you wear your sweater all day, the arena is insulated, nothing’s frozen. It’s a pretty sweet deal. The heat doesn’t bother me very much at all. We have a farm in North Carolina that we’ll eventually retire to, about halfway between Charlotte and Southern Pines, and it’s an awesome, awesome piece of ground–and little nicer weather.

What piece of equipment could you not live without?

I can’t live without my curry comb, my curry mitt. Massage, grooming… I’m fanatical about the curry mitt with the legs and the face and you can get away with just about anything else that way. And then probably my neck strap. Young horses and when we start the season and people send horses in training, for the first two or three weeks that thing comes in pretty handy.

If you weren’t a rider, what would you do?

I’d still be around horses. I’d probably be a crazy combined driving person or something. That’s probably what I’ll do when I’m old–pick some warmblood cross and do combined driving. I can’t image a lifestyle without horses and I wouldn’t want to do it. I will be involved with them in some capacity until the day I die.

I think it might be what my husband told me that the most important fence on course is the next one. That is, when you’re landing from the previous one–not thinking about the next one on the way to the first one! And early on from Karen O’Connor and David both, that the horses are the journey and you’ve got to enjoy every step along the way. With all the ups and down in this sport if you’re in it for a business plan and success in a certain amount of years or you think you’re going to invest a certain amount of money and wait for a sponsor to come carry you, you’re not in it for the right reasons. You’ve got to be in it because you love horses and you love the process.

Many thanks to Becky for taking the time to talk to EN. Go Becky, and Go Eventing!