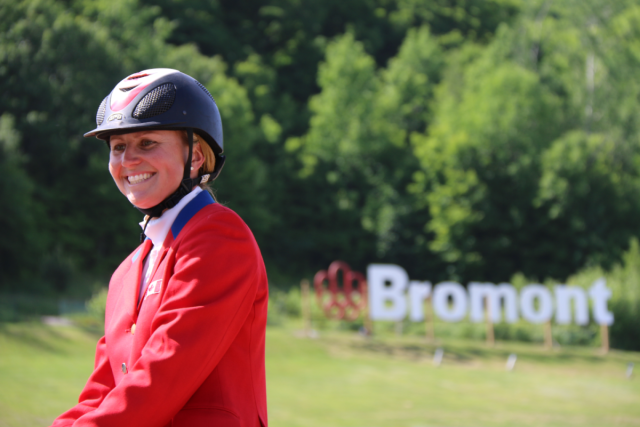 Jessica Phoenix all smiles after winning the 2014 Bromont CCI3*. Photo by Leslie Wylie.

It’s Bromont week, EN! Leslie Wylie is on the grounds to bring you all the news you need to know, starting with this afternoon’s first horse inspection. We’re also excited to partner with EquiRatings, a new website launching this month that provides trends, statistics and analysis from every international event in the world.

Founded by Irish team rider Sam Watson and Diarm Byrne (better known as the Eventing Consultant) EquiRatings has already been pumping out data on Twitter and Facebook, and you can sign up for their email newsletter on the website homepage. You’ll also be able to access exclusive data and analysis on our North American riders and events right here on EN.

With that in mind, let’s take a look at trends and numbers from the last five years of the Bromont International Three-Day Event. Here are 11 Bromont fast facts from EquiRatings:

2. Only eight combinations have made the cross country time in the CCI3* in the past five years. Seven of these were by female riders; Cody Sturgess was the only male in this period. Sally Cousins produced three of the eight rounds that made the time.

3. Twelve 8-year-old horses have contested the CCI3* since 2010. All 12 completed the cross country phase, with 10 of them jumping clear, and one — Never OutFoxed ridden by Holly Payne in 2014 — went clear within the time.

4. No horse or rider has finished on their dressage score in the CCI3* in the past five years.

5. American manpower versus Canadian girl power: Four of the past five winners were male Americans riding geldings. The fifth was a Canadian female riding a mare: Jessica Phoenix and A Little Romance in 2014.

6. In five years, Bromont has had 547 starters across all international classes, with 414 combinations completing the event — a rate of 75.7 percent. Surprisingly, the completion rate of the CCI3* class alone is higher at 80.3 percent.

7. There have only been four dressage scores below 40 across all international classes since 2010, and only 14.8 percent of competitors score below 50 penalties in the first phase.

9. Only one combination has finished on a sub-40 finishing score in the past five years. That was Buck Davidson riding Be Mine in the 2014 CCI* with a score of 39.0.

11. Only eight combinations have finished on a score less than 60.0 in the past five years in the CCI3*. Will 2015 see that number rise to double figures?