How did Bromont pull off hosting the 1976 Olympics? And can it do the same for the 2018 World Equestrian Games?

Nestled in the lush green mountains of Quebec a little over an hour away from Montreal, Bromont gives the impression of being North America’s chillest CCI venue.

If you haven’t been to the area, here’s the scene: mountain ski town, pretty as a postcard, populated by about 8,000 North Face jacket-wearing outdoor enthusiasts with charming French accents. The small urban center is posh and sleepy, and the police notoriously have nothing better to do than pull people over for going three miles, er, kilometers over the speed limit.

It’s quaint and quietly beautiful, and it’s almost impossible to imagine it being a destination for tens — much less hundreds — of thousands of flag-waving equestrian enthusiasts. And yet it was for the 1976 Olympics and will be again in 2018, when it co-hosts WEG with Montreal.

THE YEAR THE OLYMPICS CAME TO TOWN

With the exception of Team Show Jumping, which was held at the Olympic Stadium in Montreal, the 1976 Olympic equestrian events were held in Bromont at the then newly constructed Olympic Equestrian Centre.

Several structures from the Olympics remain, most notably the unique stadium. Situated in a natural amphitheater at the foot of a hill, the arena is accentuated by the natural beauty of the surrounding area. 1976 was the first time Olympic equestrian competition was held on sand instead of grass. A grandstand suitable of accommodating 15,000 spectators was added, and another 10,000 could watch from the slopes of nearby hills. 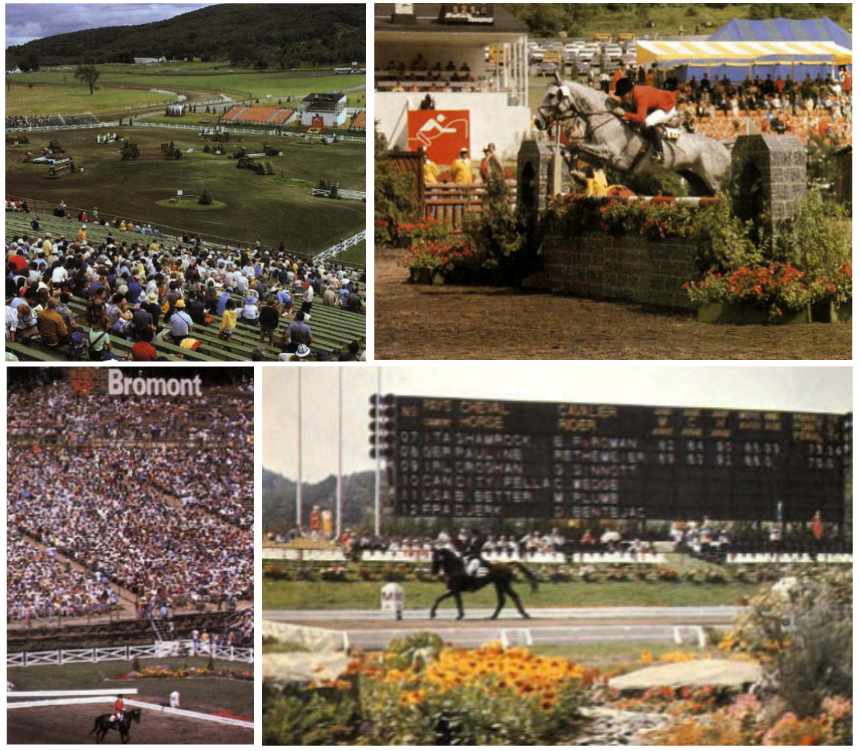 The cross-country course, located adjacent to the stadium, accommodated 80,000 spectators. 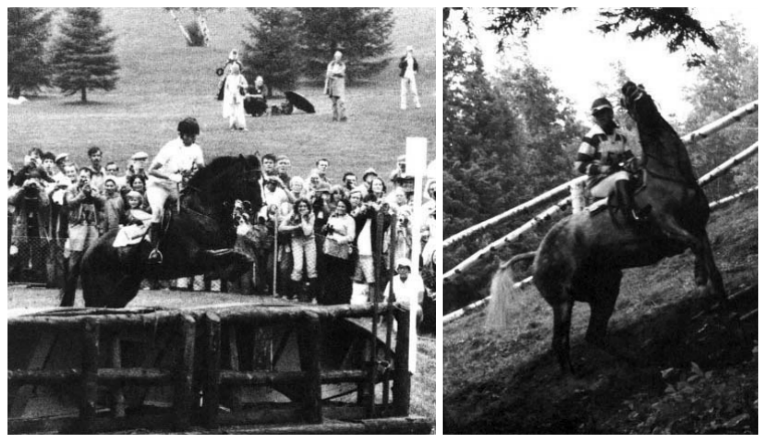 Resourceful planning utilized a combination of new and existing buildings and temporary structures. The horses were housed in 10 temporary stables located about a half mile away from the competition arenas. A restaurant/bar capable of accommodating up to 400 people was set up in the rotunda.

There was parking available for 15,000 cars, with buses running from from the furthest lots. Journalists and event personnel set up in a nearby ski chalet. The Bromont Ice Rink was converted into offices, souvenir booths, information centers, a cafeteria and a bar, and a handful of other offices were set up in a local school. 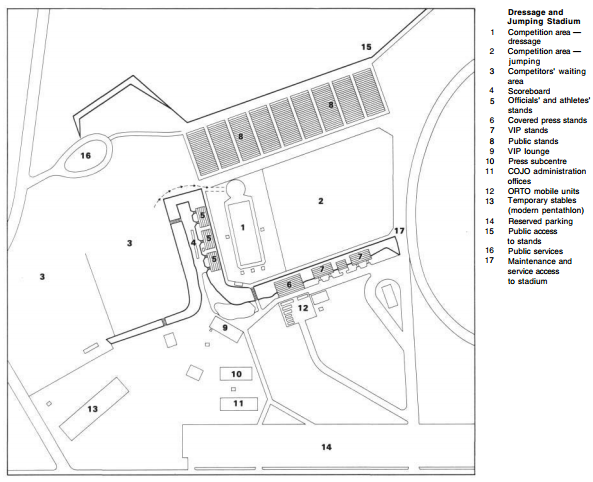 By all accounts the city did a bang-up job of transforming itself to accommodate the event and gained world-class amenities in the process. The IOC Games Report concluded: “Following the Games, Bromont, in addition to its other fine facilities, was left with an equestrian centre capable of accommodating major international competitions.”

Check out this neat video from the ’76 Olympics:

Fast forward to the 2018, when Bromont’s Olympic Equestrian Centre will face its greatest challenge yet: co-hosting the WEG.

After the financial kerfuffle of WEG 2010 in Lexington and the logistical nightmare that was WEG 2014 in Normandy, there’s a lot of pressure on the next edition to prove that the eight-discipline mega-show model isn’t an inherent recipe for disaster. Is Bromont/Montreal up for the challenge?

Without seeing the bid, which hasn’t been published, we can only speculate about how organizers envision the event’s structure. There’s been a lot of emphasis placed on the Olympic Equestrian Centre, which is poised to be WEG’s epicenter. In the FEI’s announcement that Canada had won the bid, Princess Haya explained, “The Bromont Olympic Equestrian Park is an exceptional and proven venue, and will be the ideal location for the eighth edition of the FEI World Equestrian Games, our most global equestrian event.”

Indeed, Bromont is “proven” in the sense that its 1976 success is nothing to sneeze at. But it’s worth noting that the WEG is a different ball game.

It’s impossible to do an apples-to-apples comparison. But just in terms of the number of horses involved and events staged, WEG is more massive by a landslide.

There hasn’t been an official report of how many spectators were present for WEG 2014, but according to this press release, they were expecting over 500,000 — and they’re anticipating an even higher attendance in 2018. From Princess Haya: “And four years from now, the Games will be heading to Canada, where we expect even larger audiences on the ground and on television as equestrian sport continues its global growth.”

According to the 1976 Olympics Official IOC Report, 133,681 spectators attended the competitions held at Bromont. The events not held at Bromont, the Team Show Jumping preliminaries and final, held at the Olympic Stadium, drew 60,899 and 74,223 respectively. (The latter was held immediately before the closing ceremony, which likely contributed to the high spectator count.) If you add all those numbers together and assume no overlap, which there surely was, that’s still just half of the number of spectators expected for WEG.

Five-hundred thousand people aren’t going to fit in Bromont, obviously. A population comparison of Bromont with the past three WEG venues:

Thankfully Montreal (population 1.5 million), which shares the 2018 WEG bid, isn’t too far away and has the infrastructure to support the influx of visitors insofar as food, lodging and additional event venues. We’ll look forward to seeing how Bromont edits and builds onto its already existing facilities to accommodate its our hour on the world’s equestrian stage, and we have confidence the city will pull it off in fine form. After all, they did it from scratch in 1976. 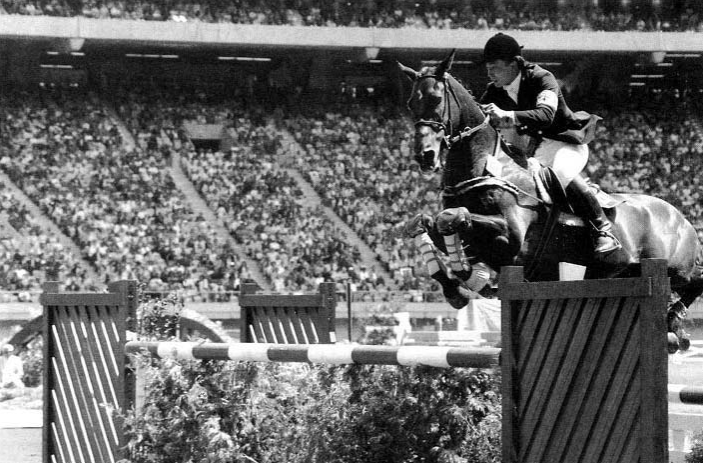 Segments of the 1976 Olympic Grand Prix show jumping competition, including the Team Final, took place at the Olympic Stadium in Montreal, which has a seating capacity of 66,000. Credit: 1976 Olympic Games Official Report (olympic-museum.de)

It sure would be nice if the USA could pull off another 1976 as well! 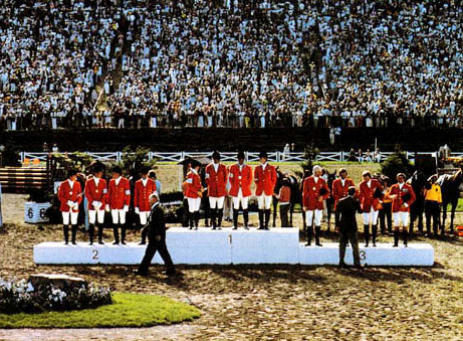 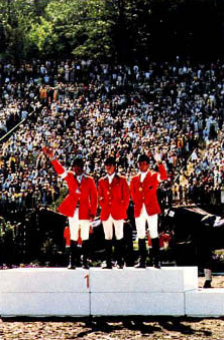 The Bromont CCI kicks off today with the first horse inspection at 3 p.m. Eventing Nation is on the ground to bring you all the action, so keep it locked here!