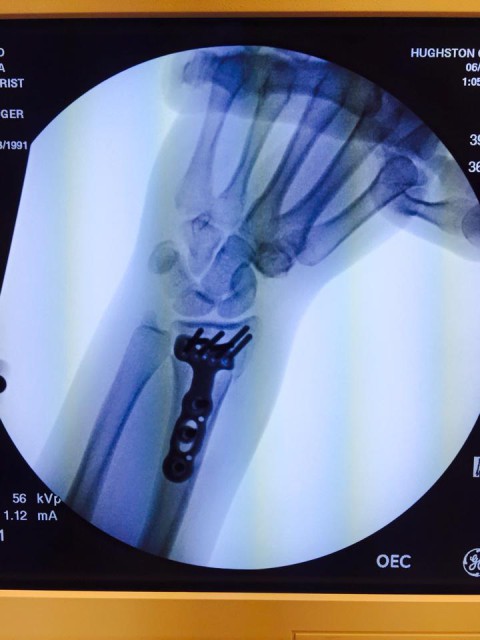 In perhaps one of the most ill-timed injuries in recent memory, Luhmühlen bound Libby Head broke her left wrist in a skimboarding accident just one week before flying out for Germany with Sir Rockstar. But she’s still holding on to hope that she might be able to compete, Libby said after having surgery yesterday.

“The doctor is hopeful it may work out with the plate they put in,” Libby said. “I can use my fingers with no pain already, but will know more when I go back in tomorrow. They have a lightweight cast that has free fingers so I could hold the reins. Obviously I won’t be pushing it and be dangerous, but I’m not quite giving up yet.”

Libby has been fundraising for a trip to Europe since last year, after she and “Rocky,” her 18-year-old off-track Thoroughbred gelding, successfully completed their first CCI4* at the Rolex Kentucky Three-Day Event with two clear jumping phases.

She was able to raise enough money to make the trip thanks to winning the $10,000 Essex Grant at last year’s USEA Convention, as well as fundraising help from the University of Georgia Eventing Team and her parents, John and Sara Head.

Let’s send lots of healing vibes to Libby as she looks to make a very quick recovery and compete at Luhmühlen in two weeks. She and Rocky would join Clark Montgomery and Loughan Glen as the only other American combination at the event.

We also hope Libby can still make the trip for her coach Kyle Carter’s sake. He talked about how excited he is to make his first trip to Germany in his latest Five Minutes with Five Ring video blog, which you can watch below.

[UPDATE June 4]: Libby has just posted on her Facebook page that she has decided to withdraw Sir Rockstar from Luhmühlen. We’re heartbroken for Libby, but we can’t wait to see where she decides to go instead. Onward and upward, Libby!

Had my first post op check today and I have a lot more movement and less pain than I was expecting, however I’ve decided to withdraw from Luhmuhlen and make this trip overseas I’ve been working so hard for really count.

I’m quite heartbroken but we’ll see where this next path takes us! Since my parents and I have planned so much of the trip already we decided to still go over to watch! I’m excited my first real trip out of the country will be to watch ponies