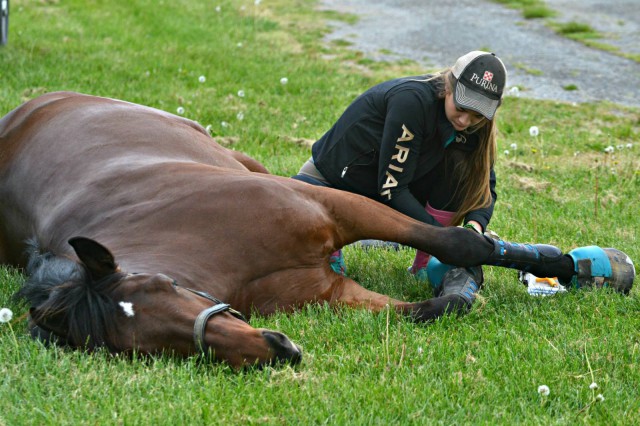 Dauntless Courage, an 18 hand Percheron/Thoroughbred cross gelding, was anything but an embodiment of his ironic name when Chelsea Kolman first met him. Chelsea, who makes her home in Lexington, Ky., first met “Dante” as a 3-year-old when he was failing miserably as a police horse in training in Asbury College.

“He actually came with his name, which is really ironic as he is very nervous and was basically feral when I first met him,” Chelsea said. “He wasn’t working out as a police horse because he was too uptight and spooky about things. He was also a PMU baby from Canada, so when he came from there he spent two weeks on a trailer getting down to Kentucky.”

A big and brawny horse, even as a weanling from a PMU program, his handlers named him “Dauntless Courage” at Asbury, thinking he’d live up to that name with his size and presence. The name quickly became ironic, though, as Dante proved he was in fact not full of courage.

Chelsea found Dante when he was three and she herself was just 16. Chelsea keeps many horses at home, most of which are rescues, and she was looking for a prospective event horse. When she discovered his timidness, though, she knew she needed to find a solution. 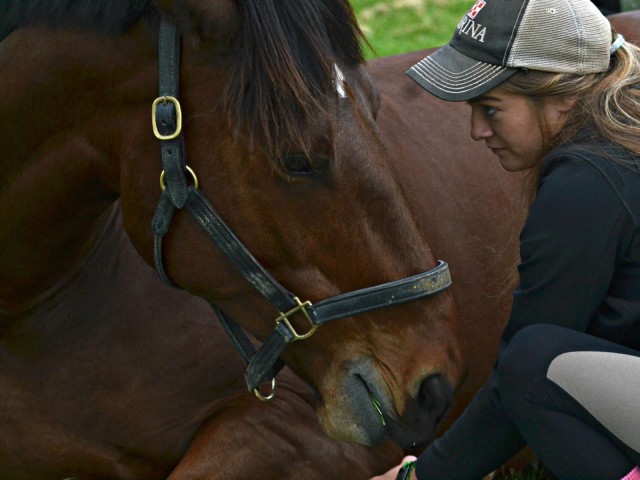 “He spooks at shadows and doesn’t like butterflies,” Chelsea, now 20, said. “I needed to find a way to center this horse and get him more relaxed. I ended up going to watch a demo by Guy McLean, who showed everyone how he lays horses down. I remember him saying, ‘It’s a big deal for them to lay down since they are prey animals. If you can get a horse to lay down, then he completely trusts you.’ I thought that this was exactly what I needed to do with Dante.”

So Chelsea set to work. She first tried the process she had seen Guy use with a pony she owned to make sure she understood everything before attempting on the big and strong Dante. “It was a complete and total personality change (with the pony),” she said. “So I started working on it with Dante, and he picked it up right away. I started laying him down after every ride, and while he did seem more relaxed, I thought we needed a ‘real’ test.”

Chelsea took Dante to his second show at Masterson Station, and the horse quickly decided the situation was too stressful and refused to walk into the barn. With Dante rearing and spinning, the situation was becoming increasingly strained, and Chelsea knew what she needed to do.

“I took him over to the grass and laid him down. As soon as he did, he let out a big breath, and when he got up he walked straight into the barn,” she recalled. She had found her solution, and Dante was slowly finding his confidence.

Since she taught Dante to lay down, Chelsea uses the technique to relax him every time he goes to an event, including before cross country when it comes time to put his studs in. “He loves cross country, so each time I would go to put his studs in he would get really antsy,” Chelsea said. “He’s an 18 hand Percheron/Thoroughbred, there was no way I was going to fight him to get the studs in. So I started laying him down, and it cut the time in half. He treats it like his own personal pre-cross country nap.” 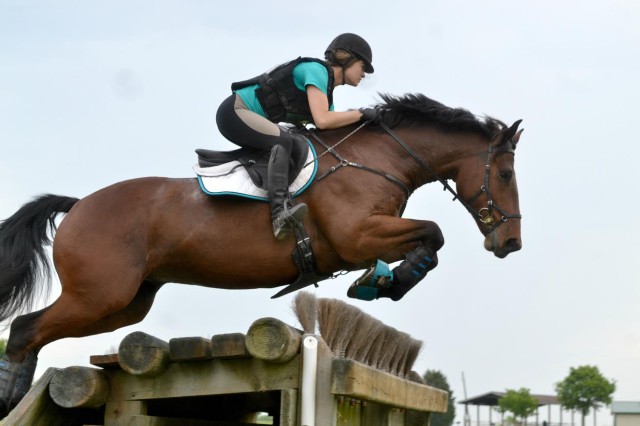 Now an 18hh 7-year-old, Dante has found his stride. He eats cross country for breakfast and always looks to Chelsea for guidance. Chelsea has set a goal of qualifying for Young Riders in 2016, and the pair moved up to Prelim this spring, already collecting two second place finishes.

“I would love to take him as far as he can go,” she said. “I also train with Emily Brollier for the dressage, and she thinks we could be competitive in pure dressage so I want to dabble in that as well. I definitely want to get my USDF medals on him, which I’m fully confident he can do.”

Indeed, Chelsea has produced a lovely horse who has the trust in her to do anything she asks. She credits the laying down with a huge boost in her horse’s confidence. Now the name Dauntless Courage isn’t so ironic, as he’s found the person with which that courage can grow.

We’ll be following Chelsea and Dante’s adventures this year and wish them the best of luck with their goals!