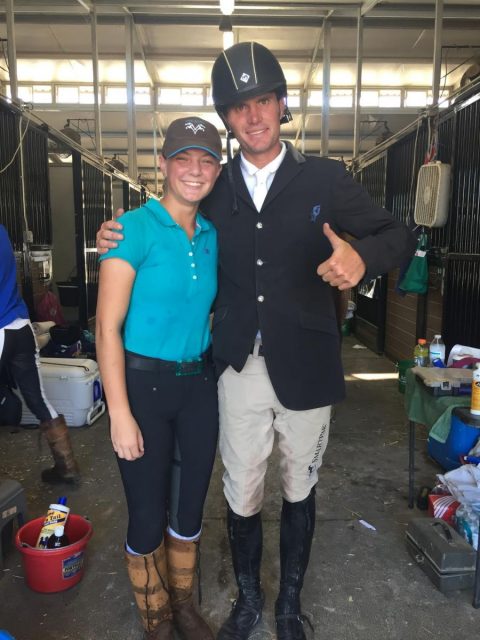 Ryan Wood, the four-star rider, might be better known, but another “Woodsy” has been making her way up the ranks. We first introduced you to the 17-year-old Alabama eventer at the 2015 American Eventing Championships, where she and Galway Blazer finished 3rd in the Jr. Beginner Novice division. After the awards ceremony we surprised her with message from four-star Ryan Wood (see “Life Advice for Jr. Beginner Novice Ryan Wood from 4* Ryan Wood“).

Since then, she says, things have only gone uphill. Ryan and Galway are a freshly minted Prelim pair, with two double-clear (in both cross country and show jumping!) runs under their belt this spring. With a 3rd place finish at Rocking Horse H.T. and a 2nd at Ocala International, they are already qualified for this year’s AECs, which Ryan says she is looking forward to contesting.

Funny story about last year’s AECs: She found herself stabled across the aisle from four-star Ryan Wood, so the two finally got to meet.

“He was incredibly nice and found it funny that we had the same name,” Ryan says. “My mom and I may or may not have gone into their tack room after he had left and found that he had left some of his numbers and his schedule which we may or may not have taken as souvenirs. His entire team was extremely nice as well and thought it was hilarious that we had the same name.”

A while back we ran a piece called “11 Questions with Ryan Wood,” featuring four-star Ryan Wood, and we thought it would fun to turn the questions (mostly the same, with a few tweaked slightly) around on the “other” Ryan this time! 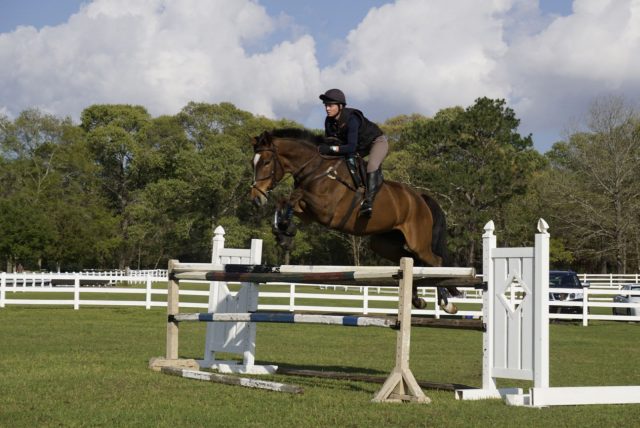 Ryan: My parents had friends with a daughter named Ryan and found it adorable. My sisters, Taylor and Peyton, also have names that could be for a boy or a girl and also have the letter Y in them. Apparently this is a thing with my parents.

EN: Who is your riding idol(s)?

Ryan: Definitely Hilda Donahue. I bought Galway from her about five years ago and have been training with her ever since. Every time I see her ride she has a massive smile on her face no matter the situation. Through the years she has helped my confidence grow tremendously. I went from a young rider on a young horse who was scared to run cross country to only being slightly nervous for my first Prelim.

Ryan: I have a horse for past and present. Past would definitely be Mrs. Hilda’s four star horse Extravagance. I have heard so many amazing stories and seen fabulous pictures of the gorgeous, massive chestnut. I just missed meeting him in person. I would love to take a cross country ride on him like the ones Mrs. Hilda has told me about.

For present I would have to say Lauren Kieffer’s Veronica. I have watched multiple videos of their events and just couldn’t pass up the opportunity to ride her if I ever got it. 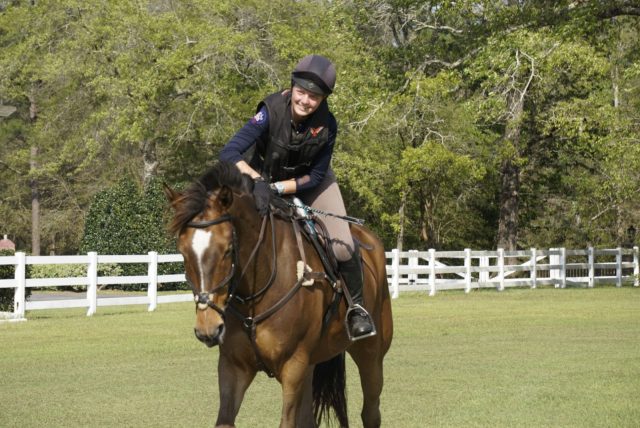 EN: What’s one of the best pieces of advice you’ve ever gotten?

Ryan: Most definitely (in a very serious voice) “just go double clear!” This came from one of my close friends that I met through eventing. I was nervous about a show jumping course and we were talking strategy when she looked at me with a dead serious look on her face and said that. Now it is a running joke that whenever one of us is nervous we tell each other that.

EN: Tell us about the most influential horse of your career to date.

Ryan: Most definitely Galway. Years from now even when I have (hopefully) had the opportunity to ride multiple horses, I believe this will still be my answer.

Galway has taught me the lesson of perseverance. About a year into owning him, we hit a wall. He was taking off and spooking at everything that moved. As a timid 12-year-old, I was scared to ride him. Despite this, we kept going and kept trying to figure it out. All of the sudden something changed. We started really clicking. I became more confident and so did he. And now, we have a bond that I wouldn’t trade the world for.

EN: If you weren’t an eventer, what would you be doing? Any other hobbies?

Ryan: I would probably be playing volleyball. As polar opposite as it is from eventing, I have always enjoyed the sport and would most likely play it.

EN: Was eventing always your sport of choice?

Ryan: I actually started by doing ballet, playing basketball and playing soccer, but riding was the first sport that I was truly passionate about. 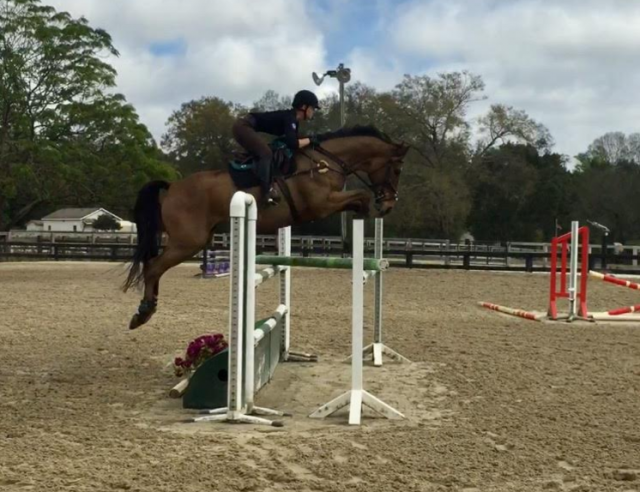 EN: What has been your favorite event to compete at so far?

Ryan: I have to say it was AECs 2015. That show was our first event after his colic surgery on March 9, 2015. When he had surgery we were told there was no way he could make it back in time for AECs. But his recovery went extremely well and by August we were back in full work and got the all clear from the vets to compete. Yes I am happy that we finished well, but I was really happy about the fact that I had my horse there with me and that he was healthy. (Special thanks to Dr. Munsterman, Dr. Coleridge, and the Auburn Vet School.)

Ryan: I would love to one day compete at Rolex with the top level eventers. On the way to that goal I think it would be awesome to compete at Galway Downs because, well, my horse’s name is Galway.

EN: What is some good advice have you been given about making it in the horse world?

Ryan: Ryan Wood once told me to go and work for Michael Jung and said that his dad told him to be patient and work hard so I’ll go with that.

EN: What prompted your move up? How did it go?

Ryan: It has definitely always been a goal for me to move up the levels and our experience at Training was very positive so we decided that it was time to move up. I couldn’t have asked for a better first experience at Prelim! Galway was incredible, giving me an amazing effort in dressage and then jumping his heart out.

He really has changed from the little 3-year-old horse we bought and we have grown together. He felt at home on the course and was completely tuned in. I never imagined finishing in third at my first Prelim. It was surreal and I almost had to pinch myself. It’s an honor to be able to say that I own and ride this horse.

I would like to give a special thanks to my parents Rob and Kristina Wood for their unlimited support and love. They went from not knowing anything about horses to becoming the ultimate show parents. I would also like to thank my sisters Taylor and Peyton Wood who happily drive from their college to horse shows to watch us ride. They have also been extremely supportive and I cannot thank them enough.

Best of luck to both Ryan Woods! Go Eventing.