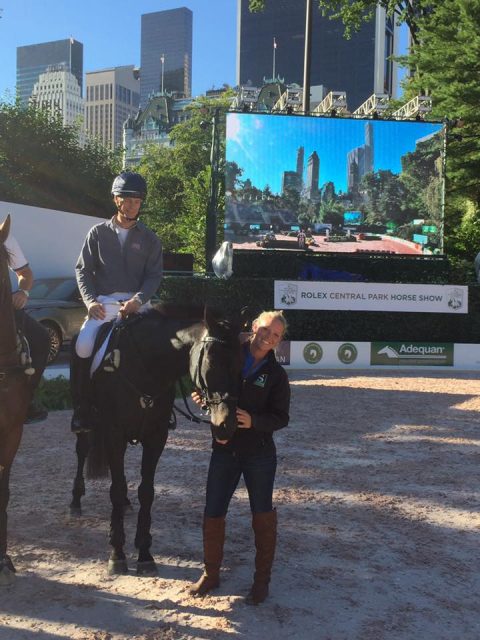 It was Wednesday afternoon when Anna Loschiavo of Bradford, Vermont picked up the phone for a call that would lead to a whirlwind weekend. Buck Davidson was on the other end of the line and he had a very interesting and unusual proposition.

Anna recalls: “He basically said, ‘Hey, so I was just going through the list of horses who were at Plantation and looking through the ones who are CCI2* qualified, and we’ve got this arena eventing thing this weekend at the Central Park Horse Show and William Fox-Pitt still needs a horse … I was wondering if you’d be willing to loan out your two-star horse?’”

Is he thinking of the right horse? was Anna’s initial reaction.

Prince Renan, a 14-year-old Thoroughbred/Holsteiner gelding, has been a horse with personality ever since Anna first rode him nearly a decade ago. Though never mean or malicious, his quirks and spookiness have not made him the easiest to bring along, but over the years Anna’s diligent work along with the support of his owners Rodney and Gina Oakes have brought him up through the CCI2* level and to the brink of an Advanced level debut next year.

With Anna being the sole rider to ever compete Renan and since the horse could be so quirky, loaning him out would not normally be a prospect that Anna and Oakes would entertain — but this was an exceptional case. There was much to consider, so Anna told Buck she’d call him back and phoned Rodney and Gina to discuss the proposition.

“I had really mixed feelings at first,” says Anna. “I would normally never consider anyone else riding Renan; I’ve even had phenomenal working students that are plenty capable of riding him, but I’m always his sole rider. However, I had to keep telling myself that it’s William Fox-Pitt we’re considering here.

“Also, things like this are really good for Renan; the more he is exposed to then the more on-point he is at events. Getting him out there and having him get that exposure would be huge. Ultimately, his owners and I felt that the exposure and the atmosphere there would really benefit him and we couldn’t ask for a better person to be on his back. So I called Buck back and the answer was, ‘Sure, William Fox-Pitt can ride my horse!’” 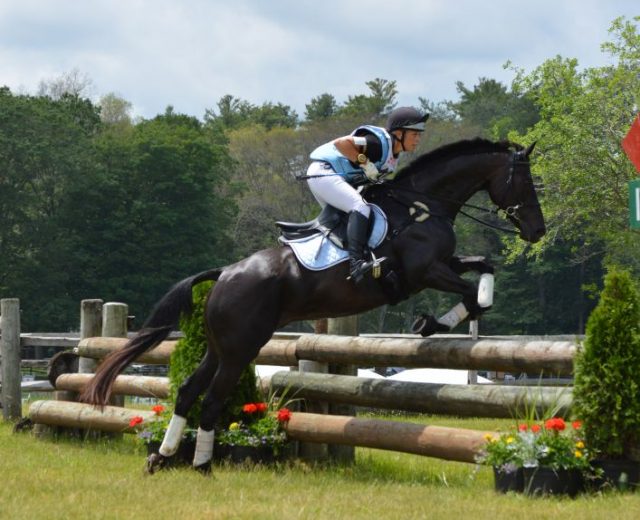 Anna, Renan and William were introduced that Friday — the day before the show — at Hamilton Farm, the USET Foundation headquarters in Gladstone, New Jersey, where William got to get to know his catch ride during a jump school.

“I had never met William before and was really excited, but also had just an ounce of apprehension because I was on the edge of my seat hoping the situation would all go well.”

Anna’s apprehension was quickly relieved as William proved to be a thoughtful and intuitive rider, as expected.

“What I really loved about William all weekend was that I wasn’t left to wonder whether he caught on to Renan’s quirks. Part of me knew he obviously would read him right, but it was really reassuring when he’d look at me after Renan spooked at a jump that he went past and said, ‘Oh, that’s a thing for him, isn’t it?’ and I’d say, ‘Yup that’s definitely a thing!’ He doesn’t like walking past or between jumps. He was so good at communicating with me; it was extremely helpful in making me feel good about the situation.”

Under the lights in the Wollman Rink on Saturday, William on Prince Renan and his “Team Chelsea” comrade Oliver Townend on Indian Mill turned in the third fastest time of the first round — good enough to return for the jump-off.

Anna recalls saying to William after the first round, “This isn’t the type of switch ride horse you’d normally get, is it?” To which William replied, “He is quite an eccentric ride, that’s for sure!”

“That’s probably the best one-sentence summation of Renan I’ve heard,” laughs Anna. “We were really pleased with how well William rode the first round because true to character Renan threw in a couple extra strides where you would least suspect they were possible, but kept getting better as he went thanks to William’s help.” 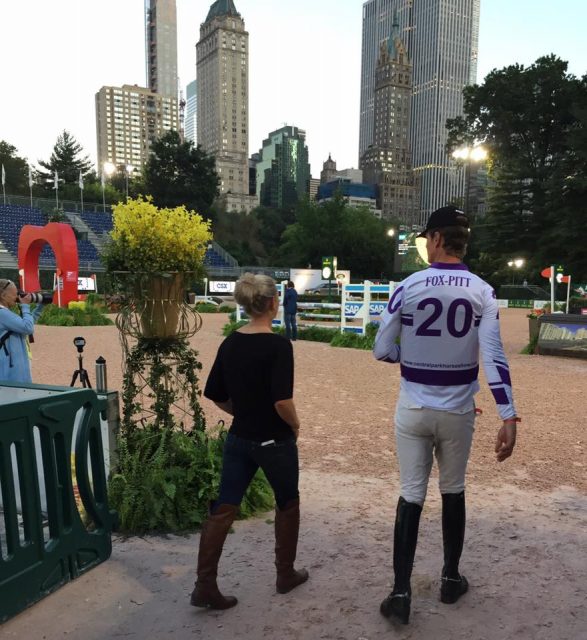 Anna and William set out to walk the course. Photo courtesy of Anna Loschiavo.

After the first round, William and Anna talked through it and came up with a plan for an even smoother second round. “We talked it over and he asked me how I thought they could improve upon the ride for the second round,” says Anna. “I’m certain he would have figured it out and done fine on his own, but it was very flattering and cool for him to ask me!”

Though Renan have may peeked at some of the fences and added a stride in a few places, William was pleased and impressed with the horse’s footwork over the fences and ability to read the questions. The second round was even smoother than the first and Team Chelsea finished on the podium in third place. 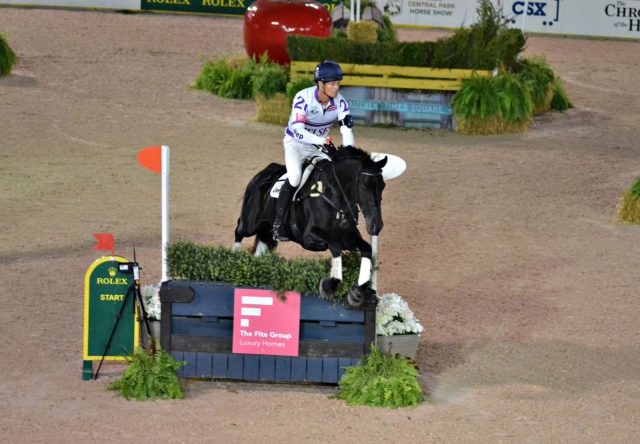 William stayed around after the awards ceremony and came back to Renan’s stall to chat with Anna again before parting ways. “Which he totally didn’t have to do, but it was very sweet of him!” she says.

“He wanted to know what was next for us and I told him we’d be doing the CCI2* at Fair Hill and he said, ‘OK, now that this horse is known to me you have to keep me posted. I expect an update after Fair Hill and I expect a top five finish!’”

William applauded Renan for his jumping ability and how business-like he was in the jump-off.

“I just love the little devil,” Anna says of her horse, “And it was very special to have someone like William compliment a horse that his owners and I have put so much time and training into over the years.” 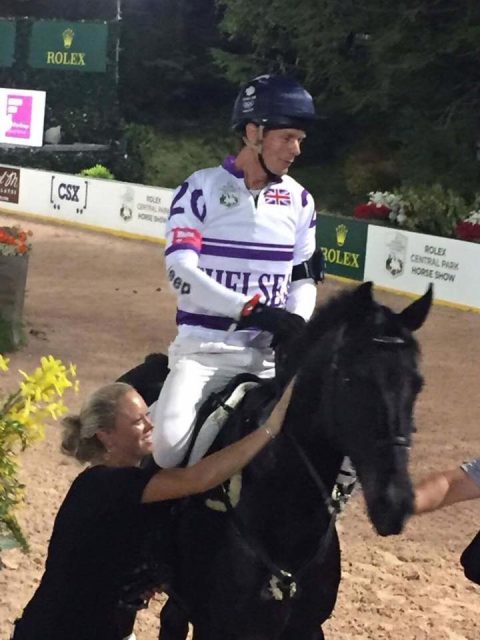 Big pats for Renan after round one! Photo by Ashley Neuhof.

Mostly though, Anna was thrilled that Renan’s owners were able to be there and share in the experience as well.

“Rodney and Gina are incredible people and they are incredibly supportive. Without Renan and without them behind him I wouldn’t be where I am now,” she says.

“They care about their animals probably more than any other two people I’ve met and are so hardworking and have such busy schedules that it really means the world to me when they get to see Renan compete at any sort of event — let alone in the middle of New York City with William Fox-Pitt riding him. The fact that they were there too to see it made the whole experience even cooler.”