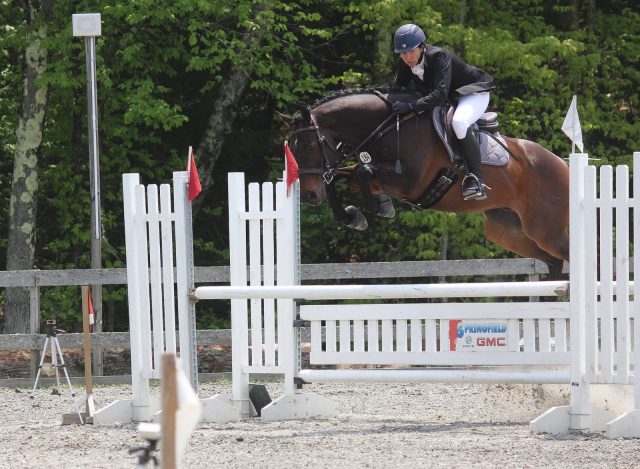 Debbie MacConnel and My Echo. Photo by Lyndsey Adams.

Groton House is magic to me and I have NEVER had the pleasure to participate. Way back when I lived in Boston and then the North Shore of Boston, I rode out of Myopia, fox hunted, did some jumpers and played over the cross country jumps in the woods. I started dabbling with the idea of eventing. I watched Groton House but hadn’t taken the leap into what I now call my home sport, eventing. Eventers are the VERY best people in the whole wide world and my only regret is that I didn’t become an eventer until I was just shy of 40 years old.

Back in 2002 I lived in Ipswich, MA, on a funny little corner lot where three roads intersected. It was a triangle of land with just enough room for a single paddock and two stalls where I kept my horses. I had wonderful access to the Essex county trail association. My own little slice of paradise! It was there that I started thinking that I wanted to event but never quite took the leap and in 2003 life took a turn which included a swift kick to the head that nearly killed me — lucky for me my farrier Steve was there to call 911 to come to save me. After recovery I made a bizarre choice and moved to Lexington, KY, and Groton House became a dream…

In the spring of 2003 I entered a barn in Lexington, KY, called Champagne Run and told trainer Maggie Wright that I want to event this horse! Maggie said, “What’s he done?” To which I replied, “He jumps and he’s a little quirky on the flat, picks up right lead from the walk and left from the trot but you can’t switch them around!” She laughed saying, “There is a show in two weeks time, I can get you in, what would you like to do?” My reply, “Well, Novice of course!”

Debbie MacConnel and My Echo. Photo by Lyndsey Adams.

Two short weeks later I walked my first cross country course convinced that those Novice fences looked mountains, I innocently ask, “What should my goal for this horse be?” Maggie’s priceless reply without hesitation, “Well a CCI* (now **). I ran home and googled CCI* and to my dismay realized this trainer thinks I am going to take this horse Prelim and participate in a long format three-day. I was pretty sure that Maggie had lost her mind and oh what a sleepless night I had that night!

And so began my love for eventing, ad with clear cross country and stadium rounds and less than stellar dressage score I conquered that first event! Fast forward 2 1/2 years to MidSouth Team Challenge at the Kentucky Horse park where My Echo and I conquered the CCI* long-format (and won)! Intermediate was the next logical step until I realized a month later that I was pregnant with my now 13-year-old son.

So back to Groton House, in June 2017 we packed our bags and headed back to Massachusetts. Excited for the opportunity to finally do Groton House my show cloths were optimistically packed in the trailer for the trip. That first summer was occupied with house hunting and plans to compete quickly moved to 2018. 2018 arrives and wouldn’t you know it I had a perpetually lame horse due to one misbehaving hoof and being new to the area couldn’t find the right farrier to help with the problem. Finally in 2019 I made it back to competing with two great mounts and cobwebs firmly planted in my brain! My goal to ride at Groton House was again postponed due to my nephew’s wedding in Oregon.

Coming into 2020 all plans revolved around competing at Groton House! My son’s camps, potential family vacations, visits to Oregon to see family, the entire summer planned around Groton House! And well we all know what is going on in the world with social distancing and lock downs everywhere. What struck me in the cancelation of Groton House is the “hope” that we will be on the other side of this soon. No one knows what the coming months will bring. No one knows if the kids will go back to school or whether summer camps will take place or when life will return to normal. No one knows if we will even have an eventing season in 2020. 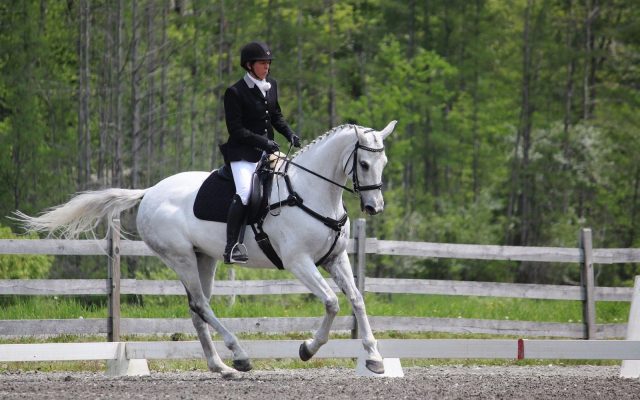 All that I know is that if we do I’ll be ready as my horses live in my backyard. I truly feel for everyone affected but this with barns closing to boarders and life as we knew it coming to a quick halt, I am taking this time to slow down, listen to my horses and the most miraculous thing is happening. I am now introspective in my riding and all the things that my trainers, Stephie Baer and Lainey Johnson, have worked with me on over the past year+ are sinking in.

In slowing down I have begun to interpret the meaning of things that weren’t sinking in cause I always had a “show to go to or a clinic to ride in or a GOAL to reach.” I want to use this time to reflect, regroup and slow down to focus on the good. Forgetting about competitions to focus on my partnership with my horses is truly a gift (though still wish I had Groton house in my headlights).