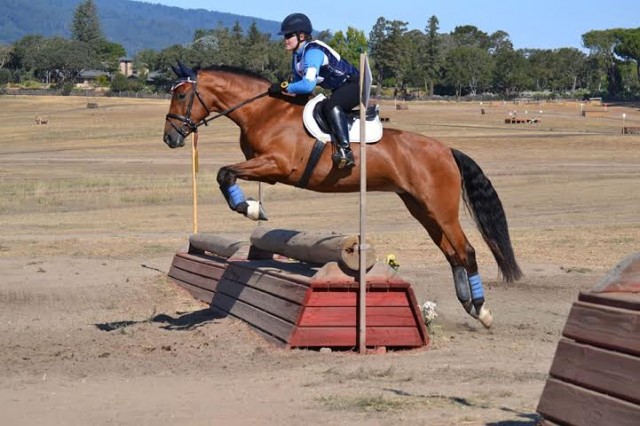 Carina HGF is a six-year-old Pura Raza Española (PRE) mare who came to Eric and Cindy Smith as a green but promising three-year-old who would make a good broodmare prospect if all else failed. The mare was well-bred, but more for dressage than eventing. “(Cindy) is a long-time eventer who decided to take a hiatus to focus on dressage,” Eric said of his wife. “We eventually started looking into breeding PREs and bought a stallion from Hampton Greens Farm. Kim Boyer then told us that she had a sporthorse mare to look at, and that’s how we found Carina.”

At the time, Carina was just learning the basics of under-saddle work. Her sire had competed through Prix St. Georges in the dressage ring, so her movement was definitely natural. Cindy undertook the mare’s training and eventually started jumping her over small fences to find out if she had any talent. “It’s funny because she was bred for dressage, so she really was never supposed to go the eventing route,” Eric said.

After taking Carina cross country schooling, Cindy discovered that the mare was game to try just about anything, and decided to find out if she could put all three phases. Cindy took Carina out in the Beginner Novice division at Twin Rivers and came home with a blue ribbon, and an eventer was born.

Carina went on to compete at the Novice level for the remainder of 2013, only placing out of the top ten once. This weekend, she is competing at Twin Rivers and currently sits in second in the Senior Novice Rider division after winning the dressage and knocking one rail in stadium.

“We’re just going to let her tell us what she wants to do. For the higher levels, making the time might be an issue because she definitely doesn’t have any sort of racehorse breeding,” Cindy said. “Right now we’re working on getting her gallop to open up more. Overall, she does seem to be a bit late to mature, but she seems stronger coming out this year so far. As far as eventing is concerned, it’s all up to her on how far she wants to go.”