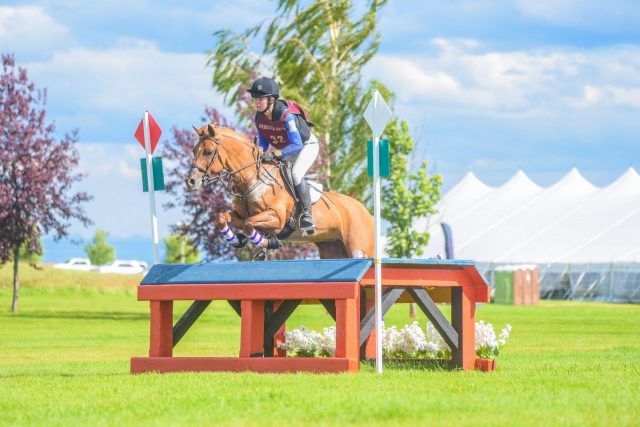 I always love watching the live streams of events other than the big international events like Kentucky or Burghley because these give us such a good view at the variety of horses that we see competing at all levels.

We all know that many horses can defy their genetics or their conformation to accomplish things we never thought possible. It’s these stories that often fuel our fire. After all, isn’t life really about making the most of what you’re given?

It was during the live stream of Rebecca Farm that I came across a pony named Lyrical Lightning competing in the CCI2*-L with owner Dorothy Hall. I always love seeing ponies jumping fences seemingly bigger than them, and this little mare — one of the smallest I can recall seeing in recent memory — was no different.

Naturally, I had to call up Dorothy and get the scoop on her sassy little Ferrari of a pony.

Not everyone can say that their first pony is the horse that took them on to their first international competition. Dorothy is one of these, having worked off the cost of purchasing “Lyri”, as the mare is known at home, during summer camp at the barn when she was just 12.

As is so often the case, Lyri didn’t just hand over the keys to the kingdom right off the bat. “She definitely was not easy,” Dorothy recalled with a laugh. “She bucked me off almost every ride, would bulldoze me in the cross ties, wouldn’t load in the trailer, and just overall wasn’t very nice.”

But the pony, who stands just 13.3 and is 75% Connemara and 25% Thoroughbred, was what Dorothy had to work with. After obtaining her C2 rating in Pony Club, Dorothy turned her attention to eventing.

Dorothy is a petite girl, but she has still had to adjust her riding to account for Lyri’s short stature. Standing 5’5, Dorothy says the biggest factors are her stirrup length and the resulting balance. “I’m quite light on her, and I put my stirrups up quite a bit to be able to be light,” she explained. “I do have other horses that I ride for clients and for my trainer, so I have to adjust to her after riding them.”

Adding to the challenge is the fact that Lyri is built slightly downhill, which makes dressage come less naturally to her. But there’s been marked improvement — Dorothy credits her time working with coach Sabrina Glaser for transforming the pair’s dressage from mid-pack and climbing to top five-worthy scores.

“The canter has always been especially difficult with her,” Dorothy said. “But Sabrina has been so helpful with us, teaching her to sit more and get her off the forehand.”

Lyrical Lightning took to eventing like a fish in water, quickly showing that her fiery, sassy personality gave her an extra rocket boost over jumps that should have been too big for her.

It even took Dorothy awhile to really buy in to the mare’s talent and unbelievable scope. “It has been on my mind to try to sell her for years,” she said. “In 2016, I went to Florida with her and worked with Sinead (Halpin) and Tik (Maynard), and when I came back and took the job with Sabrina I was prepared to sell her as a Training level horse.”

But the mare just kept saying yes, with much enthusiasm. In the spring of 2018, Dorothy experimentally moved Lyri up to the Preliminary level at Woodside. It wasn’t the ideal start at the level, and there were some kinks to work out over the first few shows at the level. Eventing is a learning process, and both Dorothy and Lyri were learning together.

The pair regrouped and gained some confidence back at Training level and in 2019 attempted Prelim again — this time, there was no looking back.

Attempting the CCI2*-L at Rebecca Farm was a lofty goal for the little mare, but the runs she’d had to start the 2019 season gave Dorothy confidence. “I wasn’t sure how she’d do on a longer course,” she recalled. “But I followed Sabrina’s training program, working on hills and lots of hacking before our rides. And it really paid off. At the end of the course, she still felt really good and she came out of the vet box early.”

Take a look for yourself:

So what’s next for the little red mare that could? Dorothy says that’s up to her, but at the end of the day the preservation of her special pony is what matters most. “She’s so bold that she will get to the other side of the fence somehow, even if it was Advanced size,” she said. “But I don’t want to put her in that situation.”

For now, Dorothy is enjoying ticking off her bucket list with the pony she never imagined she’d come this far with. “I tried putting kids on her to sell her before,” she laughed. “But no one really liked her, so here we are!”

We think you should hang onto this one and enjoy the ride, Dorothy! Go Eventing.