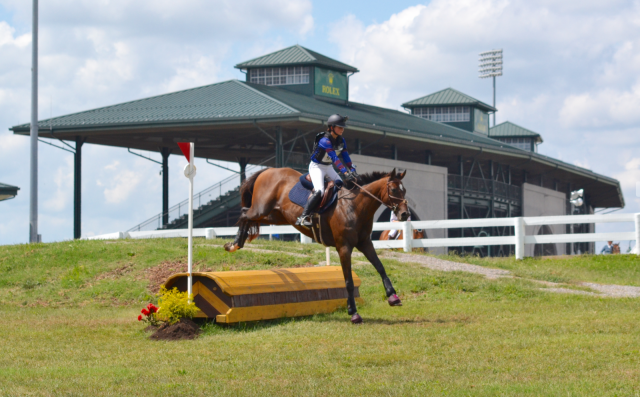 Madeline Cracknell and Commanding Curve in the Jr. Beginner Novice division at the 2019 American Eventing Championships. Photo by Leslie Wylie.

You remember Commanding Curve: the big bay gelding is popularly known for his fast-closing second to near-Triple Crown winner California Chrome in the 2014 Kentucky Derby. He was retired from racing a couple years later to pursue a second career as an eventer, with his first trainer being none other than Phillip Dutton himself — you can watch one of their earliest jump schools together in this EN post from July 2016.

Commanding Curve (Master Command – Mother, by Lion Hearted) was bred in Kentucky by Tom VanMeter. He was initially purchased by Bradley Thoroughbreds for $60,000 at the 2012 Fasig-Tipton October Yearling Sale, then bought by West Point Thoroughbreds for $75,000 at the 2013 OBS April 2-Year-Old in Training Sale. He earned $609,378 in 16 starts on the track, and came darn close to beating California Chrome in the Derby. 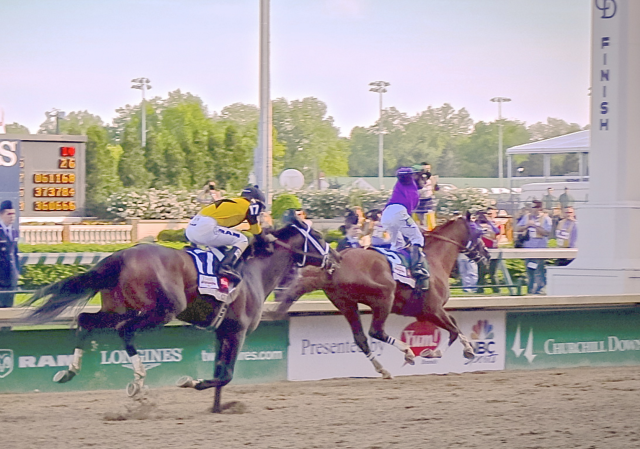 Commanding Curve (#17) on the heels of 2014 Kentucky Derby winner California Chrome as they cross the finish. Photo by Bill Brine/Creative Commons.

“He took his partners and our team on a great ride and gave us the thrill of a lifetime when he was rollin’ turning for home in the Derby,” said West Point president Terry Finley in upon the horse’s retirement. “We haven’t been able to recreate the magic of Derby day on the racetrack, and owe it to him to retire sound with the ability to move on to a second career. His partners came from coast to coast with backgrounds ranging from investment bankers to school teachers, but for only a modest investment they all experienced the highest of racing’s highs together.”

Those partners didn’t stop following the career trajectory of Curve when he shifted from racing to eventing. After finding a fresh start with Phillip only to be derailed by an injury, the horse recovered and found a new home with 15-year-old Madeline Cracknell in Pennsylvania a couple years ago.

With Lillian Heard in the irons, Curve won his first USEA event in February this year. He earned an AEC qualification with Madeline in July, having won their Beginner Novice Rider division at Horse Park of New Jersey Horse Trials II.

To the Kentucky Horse Park they went, posting a double-clear cross country round to finish in 23rd place in a very competitive Jr. Beginner Novice division.

We caught up with Madeline after cross country. “He was really good,” she told us. “He was really feeling the course. He knew what day it was and he was going for it. He was very willing — even if I messed up in some spots he still went over everything perfectly. He’s such a good boy.” 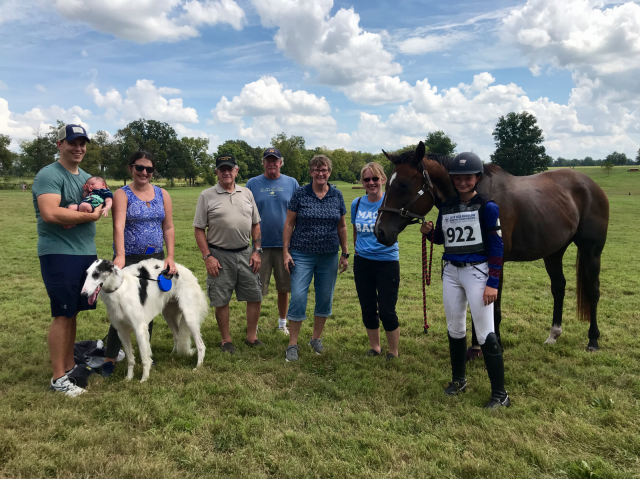 Commanding Curve and his connections. Photo by Leslie Wylie.

The pair had a big cheering section, including some of his former ownership partners who drove up from Florida to see their “horse of a lifetime” in his new life. Madeline also met his Derby hot walker and handler who drove from Louisville to see him, and one of the farriers on site was also Curve’s former farrier and paid his respects as well.

Madeline expressed gratitude for Commanding Curve’s racing connections and their support even years after he last stepped foot on a track: “It’s really awesome.”

Congrats to Commanding Curve and all the Thoroughbreds represented at the 2019 AEC. Go OTTBs. Go Eventing! 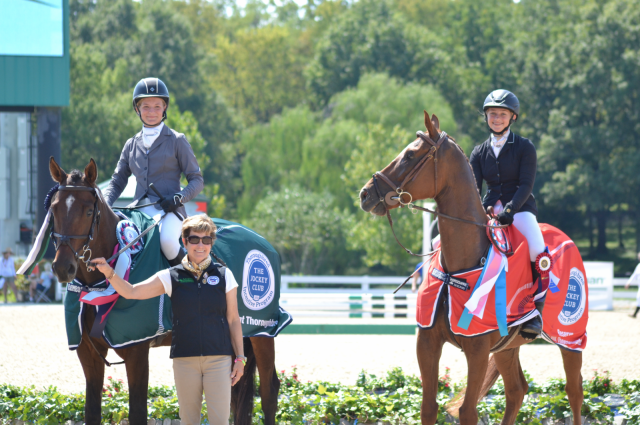