Often times, we see a horse who struggles in its first career, whether it be racing, western pleasure, or driving. From there, the horse switches paths and finds its niche in the sport of eventing. Suddenly, a horse who previously showed little to no talent or success was an exciting event horse.

This was not the case with Karen Thompson’s Shakespeare In Love, a 16-year-old American Saddlebred gelding. “Will” is a horse of many talents, and he’s got a collection of ribbons to show it.

Eventually, Karen decided to keep Will, and they’re now in their 11th season competing together, having taken just one year away from the show ring. 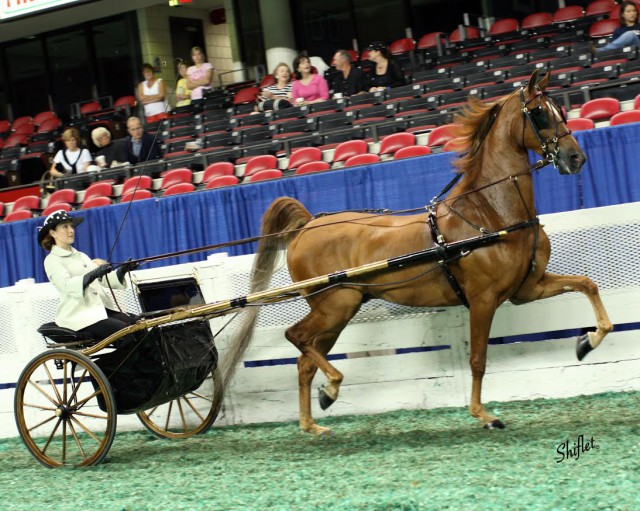 A natural show-off, Will collected many top placings and ribbons in competitions such as the Saddlebred Breed Horse Show during the Kentucky State Fair. Karen noticed that he took to driving more, given his personality and overall difficulty to ride, and she thinks he was more successful in the driving ring.

In 2010, Karen took the season off from competing, wanting to focus her energy elsewhere for a period of time. “I thought we would give Will some time off and maybe pleasure ride him, but that didn’t work out very well for him,” she recalled. “He was 11 and really fit, so it was hard for him not to work.”

This goal brought Karen to the doors of Go Big Eventing, Erin Pullen’s barn in Shelbyville, Ky. “My friend recommended Erin to me, and so I asked her if she could teach us how to jump one jump. She looked and me and said ‘Why just stop at one?'”

Famous last words. Karen first began working with Erin two years ago, and she hasn’t looked back since. Karen discovered that her Saddlebred loved to jump. “It’s the best thing I’ve ever done,” she said. “I never got to that hunter national championship because I felt like we needed to focus on this. He really liked to drive, but if you were to ask him what he preferred to do all day, he would say cross country.”

As fun as this journey has been, there has been plenty of hard work involved to get to this point. “It was a lot of retraining,” Karen said. “I had never studied dressage before, but I was surprised to see how similar saddleseat and dressage are. Will was already familiar with a lot of the bending and lateral work, but it’s been learning to relax that has been the biggest struggle.” 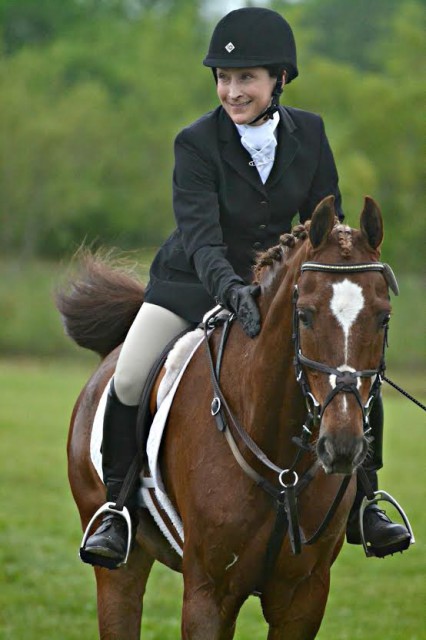 In the saddleseat and driving ring, judges look for that fiery, flashy presence — clearly not the ideal for a dressage judge. “To teach him that he didn’t need to go into the ring and immediately prick his ears and snort has been challenging,” Karen said. “That was the biggest transition, and it’s not so much of a physical change as it is a mental change.”

Karen and Will continued to improve, though, and they’ve now completed four events at Beginner Novice, even adding one win in for grins. Karen notices Will beginning to embrace the relaxation that is involved with the dressage tests, and he has taken to jumping like a fish in water.

“He’s got an incredible work ethic, and he’s so smart, which is why I think he’s been successful in so many different areas,” Karen said.

As with many Saddlebred owners, Karen has had to work with conformation that is different from a horse that is more bred for sport. “Naturally, he’s more comfortable carrying his head higher than it should be,” she explained. “I think the upright neck carriage and shoulder makes it difficult for the horse to raise its back up, but we’re working on it and with the relaxation comes a better way of going.”

Karen and Will most recently moved up to Novice at IEA, placing 13th. Karen plans to let her horse tell her what he’s ready to do, although she feels Training level is not out of his reach. “I just want to be mindful of him,” she said. “I know that whatever I ask, he will give to me, so I need to be mindful of what is best for him. But for now, we’re just taking it one day at a time.”