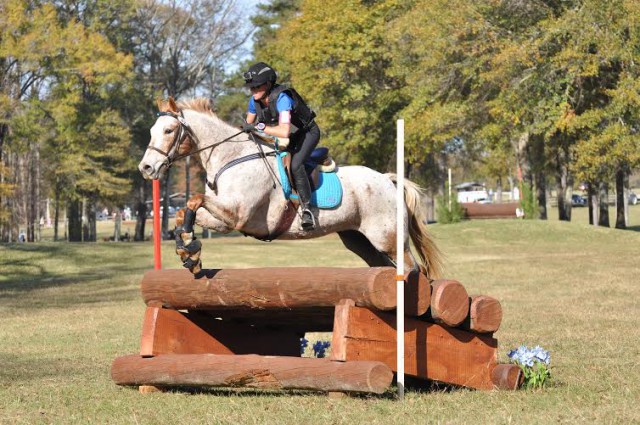 Lindsay Barrack and There's An App For That at Pine Top. Photo courtesy of Hoofclix.com.

Lindsay Barrack was not horse shopping when she met “Chappy’s” former owner. The Thoroughbred/Appaloosa cross had successfully fox hunted, but his owner was going to college and needed to find a new home for him. In a twist of fate, Lindsay offered to help a friend, who owned a local tack shop, with their holiday sale. On the day she was helping, Chappy’s owner happened to also be working.

Lindsay got to talking, and agreed to try the horse. “I had just sold my mare,” she recalled. “And I was planning on focusing on my students for awhile, so I really wasn’t in the market. But when Chappy came to my barn and I tried him, I didn’t want to let him go home.”

And so, There’s An App For That found a new home in an eventing barn after stealing Lindsay’s heart. Now 16 years old, he shows no signs of slowing down, campaigning at Training level and eyeing a potential move up to Prelim before his career is over.

“He’d done a little bit of hunter/jumper, but he primarily fox hunted, which is why he is so good on cross country,” Lindsay said. “I just got really excited after I rode him.”

Chappy became a confidence booster in Lindsay’s barn, taking students around jump courses and even taking a student around Beginner Novice and Novice this year as a packer. For Lindsay, he’s been a breath of fresh air after she worked with a few more “difficult” horses in the past.

“You can tell how confident he is on cross country,” she said. “He doesn’t look at anything. For my student who leased him, she had adopted a kind of defensive riding style from riding a stopper before. It was hard for her to understand how to be more ‘graceful’ to the fences, and he really helped her with that. It was really cool to take a step back and watch that progression.” 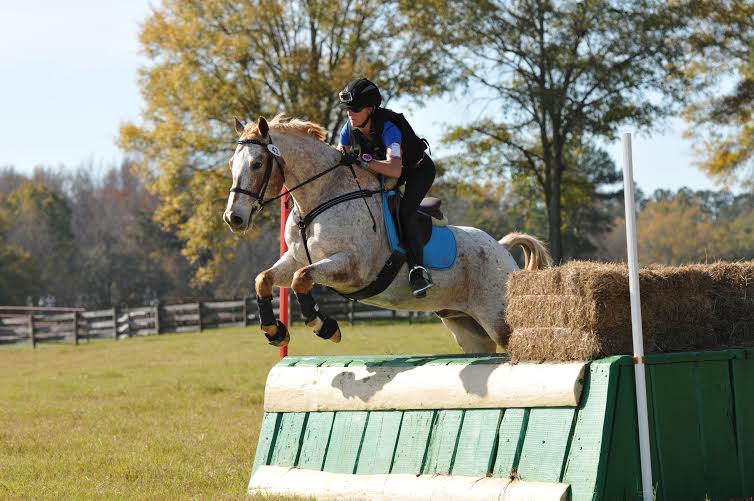 Lindsay and Chappy at Pine Top. Photo courtesy of Hoofclix.com.

Chappy’s sire was a Thoroughbred with racing lines and his dam was an Appaloosa. He’s a registered Appaloosa, and he’s definitely built more like his dam than his sire, Lindsay says. Aside from his build, though, he’s shown no limitations when it comes to sport.

“He’s actually a really nice mover on his own,” Lindsay said. “Probably one of the best in our barn! He’s been so sound and honest for everyone.” When it comes to fitness, Lindsay keeps him on a routine of trot and gallop sets, but he pulled up from his last Training run at the Thanksgiving Pine Top still ready to go around again.

“He’s more fit than I am at this point, I’d say,” Lindsay laughed. “I broke my pinky a few months ago, and it needed surgery so I was off for awhile. We came off cross country at Pine Top and he could have gone again but I was done. He’s a total machine — if I could describe him in one word, it would be ‘rockstar.'”

Lindsay bases in Tallahassse at Mahan Farm and trains with Hilda Donahue, who is confident that Chappy will be Lindsay’s one-star horse in the near future. “I think it would be an absolute great end to his career if we got him there. We’ve schooled some Prelim stuff and he had no trouble with it. I think we’ll just need to focus on getting him more conditioned so that he can make the time at Prelim. The biggest challenges will be the speed and the dressage.”

Lindsay plans to take Chappy to the new event in Florida at Three Lakes this winter and formulate a plan to move him up when he is ready. “He’s super capable, and he’s in the best shape of his life. It’s just one of those things where I wasn’t expecting this to happen, and he just kind of fell into my lap.”