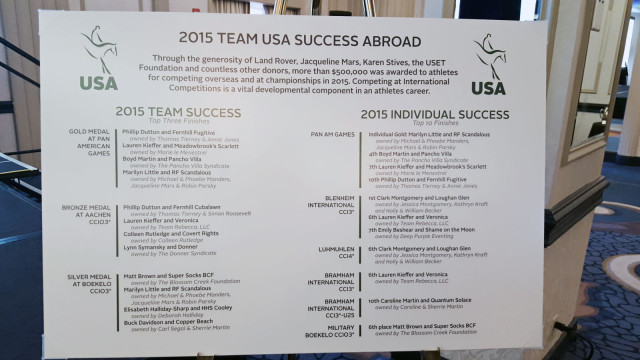 Hello from the 2015 USEA Annual Convention & Meeting! The festivities kicked off this morning with the first rounds of meetings, forums and seminars taking place this weekend here at the Omni Shoreham Hotel in Washington, D.C.

U.S. Team Coach David O’Connor led the first of his sessions for the High Performance riders this afternoon, taking a look back at some key facts and figures from the 2015 season.

Team USA targeted three major trips this year: the Pan American Games, where the U.S. needed to qualify for the 2016 Olympic Games, and two Nations Cup competitions at Aachen CICO3* and Boekelo CCIO3*.

“We really wanted to compete at as many Nations Cups as possible because we have so few team opportunities in the U.S.,” David said. “We wanted to go after the (Nations Cup) program, including bringing one back here to the U.S.,” which is slated to happen for the first time in North America at Great Meadow on July 8-10, 2016. 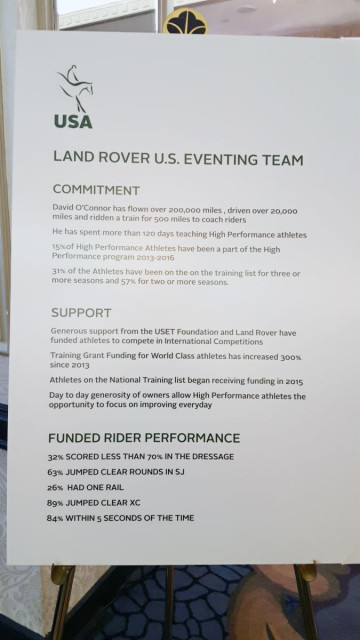 Funding trips for riders to compete overseas and “get off the island” continues to be a huge priority for the U.S. High Performance program, David said, and he gave a report on the success rate of the riders that received competition grants in 2015.

Team USA sent 20 fully funded riders and one partially funded rider to international competitions in 2015: four to the Pan American Games, one to Bramham, four to Aachen, two to Burghley, five to Blenheim, three to Boekelo and one to Pau. Paying for travel costs to send horses and riders overseas continues to make up a large part of the High Performance budget.

Another 17 U.S. riders traveled overseas on their own dime without a grant: one at Tattersalls, 1 at Luhmühlen, three at Bramham, one at Burghley, two at Blenheim, six at Boekelo and three at Pau.

“Having a presence of 37 combinations in Europe I think is huge,” David said. “That’s being talked about in Europe quite a bit. They’re seeing a lot of news faces and combinations, and that is definitely a buzz over in Europe.”

Next we took a look at the average scores for the funded riders that competed internationally in 2015. In dressage, 32 percent of riders scored under 70%, and the overall average dressage score is continuing to drop. The U.S. also saw two scores under 40 from funded riders.

“That made a huge difference in the competitiveness, as it always does,” David said. The U.S. Nations Cup team at Boekelo was able to climb to second place in the final standings thanks to good show jumping rounds. 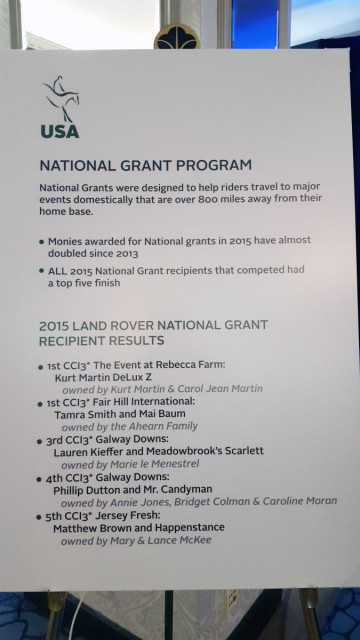 When you consider that only 53 percent of funded riders were jumping clear cross country rounds two years ago, the consistency rate is definitely improving. As David put it: “The ship is starting to turn.”

“Things are getting more consistent,” David said. “That’s the key to selection — a consistent performance time and time again.”

But with the 2016 Olympics just around the corner, David made it clear that the work is far from over. “In the end, where we missed was the technical and theoretical side. We’re about to get into phase two: the competitive and instinctual side. It’s not any good to tell people to be better if they don’t know how.”

Continuing on the topic of polishing the competitive and instinctual side of Team USA: “The top riders across the board are getting a lot more comfortable in the dressage ring … We’re starting to see the instinct and the moments,” David said. Now it’s about “fine-tuning those details,” which David said will be a priority through incorporating more dressage test riding into the High Performance training sessions.

David said the team’s show jumping “is better in controlling position and softness, but show jumping is not at the instinctual level yet. We’re having to think about it, and that’s a great step. It’s a step on the way and in the right direction, but that will be a huge thing to start practicing that and bring control to a more instinctual level.” 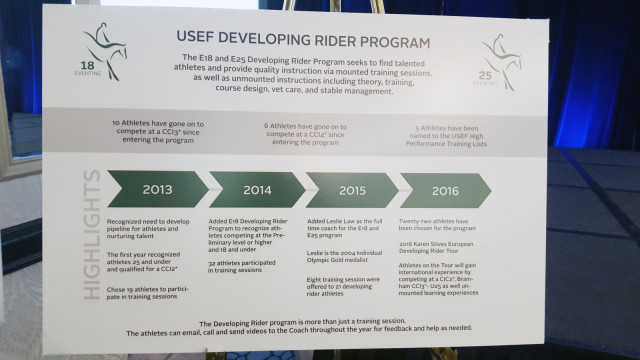 “What I’ll be looking for is working more on the rideability and the smoothness, because we still have too much movement and swinging around for the area of 10 strides away (from the jump) to two strides away,” David said. “Too much swing, too much movement without the horses able to concentrate on what’s out in front of them.”

A focus on smoothness will be especially important in looking ahead to the 2016 Olympics, where designer Pierre Michelet’s cross country course “will be about handiness, 10 minutes of twisting and turning,” David said.

Here are some other noteworthy tidbits from today’s High Performance session:

Tomorrow’s High Performance presentation will focus on Team USA’s plan for the 2016 Olympic Games. Stay tuned for much more from the USEA Annual Meeting & Convention, and click here for all of EN’s coverage so far. Go Eventing.