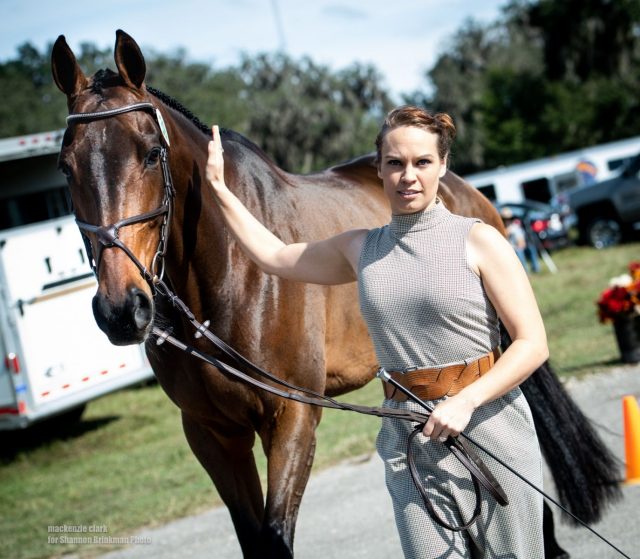 We’ve heard a lot about mental health lately and in light of a couple of people I greatly admire going public with their story, I felt I could do no less.

My story doesn’t have a lot of angst or long-term mental struggles. I’m not a horse professional who has to constantly worry about making ends meet, managing the ups and downs of running my own business, walking the fine line with owners, or living and dying by the success of my horses.

I’ve got my own burdens of course, but I specifically chose to take the amateur path to avoid the aforementioned pressures, and thus far have been happy with my choice. I’ve been well aware that burdens like these could lead to a lot of heartache and questioning and mental wear and tear. I’ve admired people who have chosen to tackle these hardships head on and have always thought that those who sought help with their mental burden were smart, not weak.

I never realized that I too might benefit by seeking help.

Up until 2019, I felt like a pretty optimistic person and certainly didn’t consider myself a candidate for depression, or anxiety, or anything of that nature. I had a bit of a short temper and low threshold for frustration and thought it might be a problem eventually, but I thought I just needed to learn some self control.

Overall my life was going pretty well; happily married to a wonderful man, both of us had good jobs and I really liked my employer. My young horse was finally starting to roll through the levels, my older horse was thoroughly happy being retired in a field for the time being and really things were pretty peachy. I had no reason to suspect that I might benefit from any kind of mental therapy.

Then last winter turned into a pressure cooker. In December of 2018, I signed up for the biggest professional exam of my life, an eight-hour test held in April that I’d need to fly to my home state for. It was a big deal and I knew I’d have to put some serious studying in over the winter.

Just before Christmas, I took a look at my workload projections and realized I had been put on a few too many projects at once. Even though I could see the train wreck coming, I couldn’t change it. By February I was hip deep in every project and couldn’t extract myself. My employers threw as much help at me as they could, enough to get the projects done, but I was putting in a lot of overtime. I’d go home late every night and force myself to study while the weekends were entirely spent trying to catch up on what I’d fallen behind on that week, either studying or work. I knew the help I had been given was struggling and needed more supervision and support but I couldn’t give it, which was leading to multiple mistakes going out for submission. I felt like a failure at work and a failure at studying.

It was a lot, and suddenly my frustration was on display every day instead of just once in a while. I tried to hold it in, which just put me more on edge and I ended up totally overwhelmed and fighting back tears on a daily basis.

Meanwhile the deadlines loomed, both for work and the test. I was three weeks out to the exam, multi-tasking like crazy, and feeling like I didn’t have anything under control. My back somehow got tweaked and every morning I woke up the pain was worse. But I couldn’t stop to go to the doctor, I had too much on my plate.

Then my retired horse, who took me through Advanced and was my horse of a lifetime, picked up something neurological. It took only 10 days but despite veterinary intervention, I had to euthanize him. At noon on a Wednesday, I stood in the breakroom at work, crying brokenly into the phone as I made the call. I was three states away and I’d never see him again.

I went home sick that afternoon and did nothing. I sat on the couch and cried on and off. I didn’t make an effort to study or work. I just did nothing.

I was 10 days away from my exam. I’d invested an incredible amount of time and money into taking and passing this exam. I couldn’t pull out … I couldn’t get distracted. I knew I’d need some help to get through it.

In the end, an anti-anxiety medication was the solution. I no longer felt that agonizing grief wrapping around my spine, sitting hard in my gut. I still cried if I let myself think about my horse but I could easily direct my thoughts elsewhere.

And surprisingly, my temper and frustration vanished.

I got through my test and through my back pain. My younger horse came back from Aiken which helped me cope with my grief. My deadlines passed which eased my workload. Things returned to normal, and yet I stayed on the medication because I felt a huge difference.

I didn’t have a short fuse … I had anxiety, which manifested itself in a rising temper. Suddenly I was able to shrug when things unexpectedly came up at work and look for ways to mitigate the damage instead of just angrily saying it couldn’t be done. Suddenly I was able to just ask my trainer what to try next when something I was doing wasn’t working, instead of being frustrated at an animal who was doing his best to understand how I wanted him to respond to my cues.

It’s been almost a year since I started receiving some chemical aid. My brain needed to be re-wired and a new pathway had to be formed. For the first six months, I noticed a big difference the next day if I forgot to take my prescription at night. Recently, I have noticed that at work I don’t have the same gut check reaction of anger if something unexpected happens, even if I have forgotten to take my prescription. I suspect the pathways are starting to reform.

I’ve been surprised at how others have reacted when I shared my news. I’ve been pretty forthcoming about it with people close to me. A few people, usually older, have reacted tentatively, making me think they don’t entirely understand or approve. However, most have simply responded like it makes sense to them. Several have actually shared their own story of how they have received some help too.

I don’t see shame in the fact that a little chemical help made a big difference in my health; in my view it’s no different than taking a daily medication to help with heart disease, or diabetes, or any other chronic condition in the human body. I’ve made an effort to be matter of fact and open about receiving help, although I’ll admit that I had a bit of a pause when I thought about writing this, letting myself open for judgement from any stranger.

But being open about it helps reduce the stigma and if I can do my part to help make mental health less of a taboo subject, I will.

As awful as last winter was, I could have just struggled through the rough patch and returned to the previous status quo and that is probably exactly what I would have done had the issue not been forced. If my horse hadn’t passed when he did, 10 days before my exam, I would have tried to cope. And I wouldn’t be as happy today as I am.

Talk about your experiences with your friends, with your family. In all likelihood you’ll hear some stories that surprise you. And we can all reassure each other that we don’t see seeking help to be a weakness, but rather the smart thing to do.