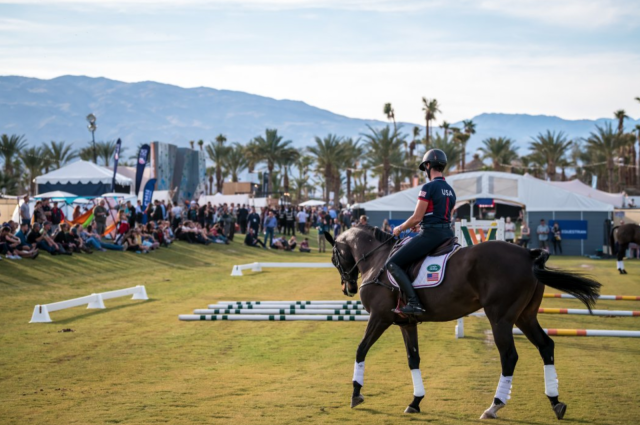 US Equestrian and Land Rover celebrated a ten year partnership together and the launch of a new #WhatsYourRide campaign over the weekend at 4xFAR, a two-day music and adventure festival in Coachella Valley, California. Tamie Smith, Frankie Thieriot Stutes, and Land Rover U.S. Eventing Team Chef d’Equipe Erik Duvander were on hand participating in live demonstrations. We’re thankful for the continued support of Land Rover in our sport!

21 people sit on the USEA Board of Governors and it’s these folks who run the organization by voting on important matters. That a simplistic way to describe their function, but it’s an important role they serve in our sport’s governing body, so let’s get to know them! Among them is our new USEA President of course, plus a representative from each of the 10 USEA Areas, plus another 10 people representing various demographics of the sport. [Meet the 2020 USEA Board of Governors]

Claire Lomas was training for Burghley in 2007 when she was knocked out of the saddle by a low-handing brach and left paralyzed. In 2012, she completed the London Marathon. Claire wore a robotic suit that allowed her to walk and it took her 17 days to complete the course, but the former practicing chiropractor was used to focusing on goals and achieving them. Today, she makes a living as a motivational speaker and she’ll be tackling the marathon again this year. In 2007 Claire raised money for spinal research; this year she’s raising money for an organization that helps disabled kids lead active lives. She’ll be racing in her wheelchair this time and plans to wear motorcycle gear because she recently achieved her licensure to become a competitive motorcycle rider. Oh, and her husband and another friend will run alongside her dressed as pit crew girls. [‘I plan to shave my London Marathon best by days’ – wheelchair athlete Claire Lomas on why she will attempt this year’s event in motorcycle gear] [Donate to Claire’s Fundraiser]

Can’t beat the view from #4XFAR presented by @LandRoverUSA 🤩 Go behind the scenes on our story to check out this inaugural music and adventure festival! #USAEventing pic.twitter.com/wrTxo2tARD