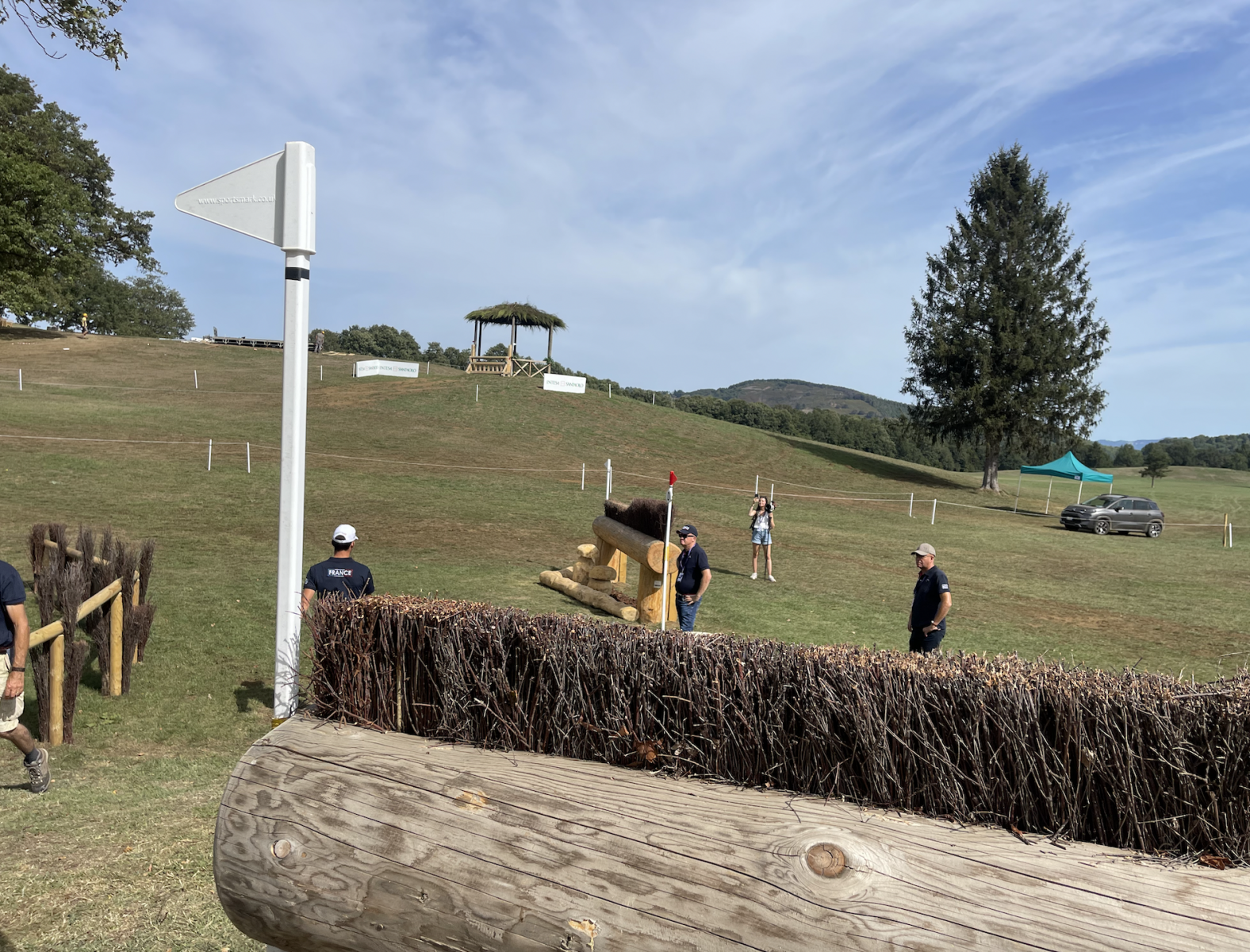 The straight route out of the water is directly out the other side and over a stiff challenge of angled brushes on a curving three-stride line. Photo by Tilly Berendt.

With 88 riders in total, a consensus wouldn’t be expected, but opinions of Guiseppe della Chiesa’s cross country course are all over the board. Some applaud it, others dislike it, but everyone respects its significance. EN’s Tilly Berendt has followed the Mad Hatter down a rabbit hole of comparative research of the track, which she’ll share in a forthcoming course preview, but in the meantime, check out what the riders have to say:

Boyd Martin: “It’s a pretty testing course, and World Equestrian Games — there’s always a lot of pressure. I think it’s a proper, what they call it a four-star that feels like a five-star course over nine minutes, fifty [seconds]. But like you said, I’m on a veteran. And he’s done bigger and badder and longer courses. So I’ve got some comfort knowing that he’s dealt with harder fences. But any jump you can make a mistake and it can all go wrong, as I found out at Tryon.

Tamie Smith: “I think it suits him perfectly. It’s a very riders type course — the horses need to be fast, but they need to be rideable. And he’s all those things, and he’s smart, and he’s brave, so I’m looking forward to getting out there.”

Lauren Kieffer: “It suits him. The jumps are big and it’s a proper championship track, and I think everybody expected that and planned for it. [Vermiculus is] very seasoned at this point, but hey anything can happen it’s cross country day, but I’m very confident in the horse I’m sitting on.

Will Coleman: “It’s a really intense track. So my job is to go out there and bring back some good feedback for the other guys. It’s a it’s a kind of a mongrel track, especially in the beginning, you’re just kind of weaving up and down these Pratoni hills. He’s not the most blood, but he’s a real fighter, and I think he’ll hopefully bring that same kind of Bulldog like attitude to the cross country.

Ariel Grald: “There’s plenty to do but the hills and the sort of terrain actually will suit him. So I’m excited to give it a crack and go as fast as we can and have a good round.”

Michael Jung: “I’m not so happy about the cross country because when you see and when you know the cross country place, it’s just a beautiful place. But it’s — he didn’t use the whole course, so he make it very twisty, many turns where you have to slow down and it’s difficult to find a really nice rhythm on this high level. So it makes it much more complicated. This is a very beautiful cross country place, but I didn’t like how he used to track. It’s very twisty and it’s not really to get a nice feeling around there, but maybe in the end is better to gallop, better to ride than I saw. But it’s just sad that he didn’t use the part [in the back] so you can have a really nice, open gallop.”

Julia Krajewski: “There’s a lot to jump out there, which will hopefully suit us, but of course it’s a proper test. It’s technical. It’s everything you want from a championship course. It offers quite some options, which you can take but they will spend too much time. I’m third to go [on the team], so I can watch quite a few and probably decide a few things then.” 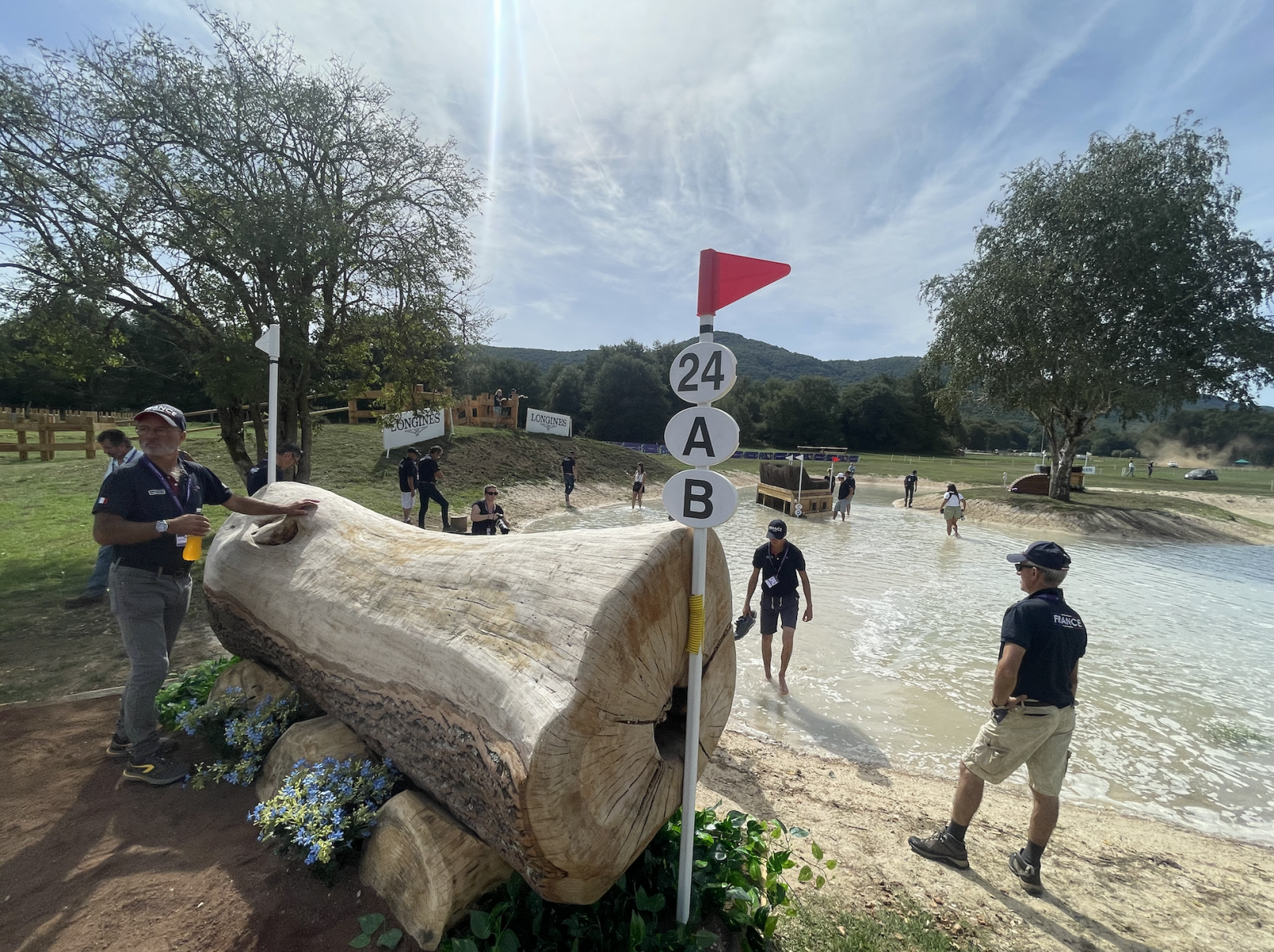 From 24AB, the direct route goes to a beefy brush corner in the water at 24CD. Photo by Tilly Berendt.

Laura Collett: “We need to know our alphabet. It’s a proper championship track and yeah, I mean, I came here in 2005 for the Pony European, so I kind of knew roughly what to expect. Sadly it’s not gonna be a dressage competition. But yeah, I think from start to finish it’s full on. There was a lot of head scratching about, you know, when we first walked in, actually what the direct route was. There’s so many options. So that takes a lot of thought to figure it out.”

Yasmin Ingham: “It’s very clever. And it’s fun to have strong combinations — they come out throughout all the way until home really, so you’re definitely never off the hook. Mine can get quite strong, so I’m hoping that by the second hill he might not be trying to pull my arms out. So that’s that’s the hopeful. But no, I’m looking forward to writing it and I’m very pleased to be sat on my hands.”

Oliver Townend: “It looks like a very tough place to ride around in terms of the terrain. You’re always climbing up a hill, and a few places that you’d like to go a little faster he’s got a combination that you have to slow down for, so it’s gonna be an interesting day. A few too many things for my liking for cross country, it’s more like a show jumping course around a field but at the same time, very, very happy to be here. I always enjoy Giuseppe’s courses and technical questions.”

Tom McEwen: “The thinking rider will come out on top, I think, tomorrow whether it’s regarding horses, how they’re feeling underneath you, or how the course could change because even now [with all the] people that seemed to be walking the course, like walking up the water coming out the first water, I mean that bank is already broken up. I mean, it’s one of the first shows for a long time where there’s actually been eighty- eighty-plus horses in the class. So yeah, it’s gonna be by three-quarters of the day, it’s gonna look different I would have thought.”

Jonelle Price: “I think time is probably gonna be the biggest factor. You know, you’ve got to remember we’ve got such a high caliber field of horses here that I think, you know, no matter what you’ve built, they’re gonna make light work of it. You know, the British team — they’re the best in the world, those horses, and they’re all experienced five-star horses and this is nowhere near five-star track. So I think some of the horses are going to make light work of it. But you know, suddenly the hills and a lot of congested jump efforts will see the clock coming.”

Tim Price: “It’s a funny course because it’s perched on the side of a hill and it’s got all sorts of portable jumps stuck everywhere. So you know, I’ve just come from Burghley, which is one of the biggest, most beautiful courses in the world as we know, and it feels like it’s a little bit of a downgrade, but that doesn’t mean it’s any less difficult. The time is going to be extremely tight, that’s my forecast, and that’s gonna put a lot of added pressure on all the riders. Especially they’re trying to look after their teams.”

Amanda Pottinger: “I think I think it’ll cause a lot of problems but I think it’s probably cuz some of us are used to five-stars now. It’s a shame there isn’t a bit more galloping space.”

Andrew Hoy: The terrain that Giuseppe has put in I think is good. There’s a section in the middle that I just won’t go too quickly across where we’re running across the across the hill on [an angle sideways]. For me, that’s something that I just want to take a little bit of time with to make sure that I have a good and healthy horse when I finish.”

Holly Jacks: “It is absolutely beautiful. I think they’ve done a great job of asking proper championship questions, but they’ve put options out though that still ask the same questions in an easier manner to get everybody home.”

Dana Cooke: “It’s tough. It’s definitely not going to be a dressage show. Yeah, it’s there’s a there’s a lot to do out there. The combinations, I think, you know, he’s really used the terrain quite well on the camber of the ground. And so there’s there’s definitely going to be some, some tricky questions out there.” 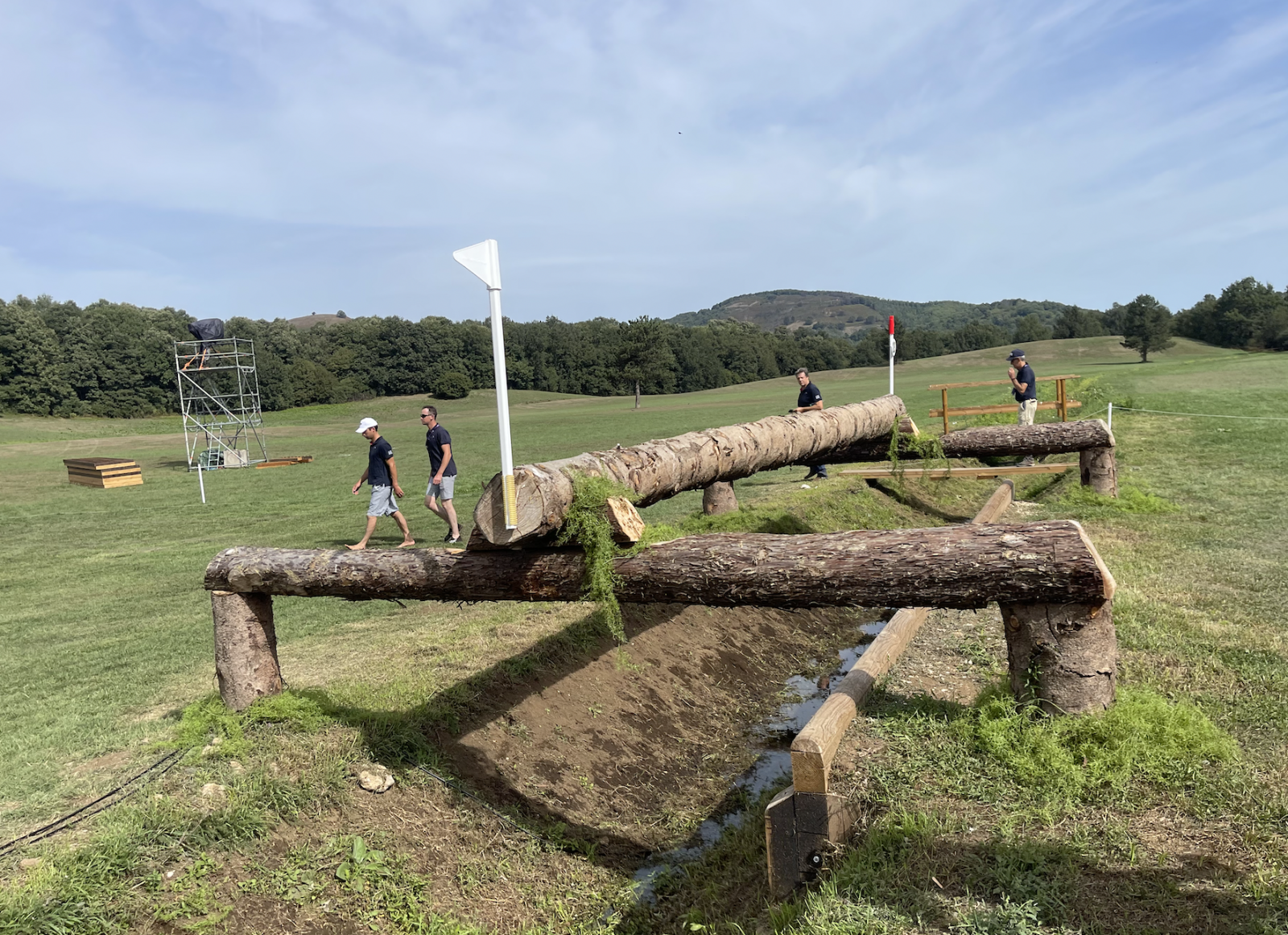 Riders will do a wide, swooping turn back over an open trakehner at 23.

Karin Donckers (BEL): “A big course as always. I rode here last year in autumn also with Fletcha. It’s especially I think the ups and the downs in a 10 minute course. You have to ride clever from the first moment till the last moment. But it’s definitely will be no dressage competition. That’s for sure.”

Esteban Benitez Vallei (ESP):  “The [cross country is] very hard and long with the with the hills and so on — it’s gonna it’s not gonna be easy, and it’s not gonna be a dressage competition. But we have to feel how the horse is in that moment for every combination. Like the last combination of the water is a drop down and then a corner — it’s not [an] impossible combination, but I know that the horses will be very, very tired. We’ll say how, how much is rains. Luckily I am at the beginning of the of the class so the ground will be okay for me, especially on the number [the Pratoni slide]. I think after 30-40 horses it’s going to be very, very difficult in there.”

Astier Nicolas (FRA): “It’s not any more advanced [than you’d expect]. You can see that [where] a lot of the fences are pretty forgiving and pretty small or medium sized. But there are a few combinations that could do the job. It’s a bit twisty surprisingly with all the big cross country ground they have — [there is] never really a good place to gallop.”

Korntawat Samran (THA): “It’s very technical and goes up and down [hills] all the time. We just have to be careful with that. Our horses been prepared well, so I think the fitness will not be the problem for us.”

Fouaad Mriza (IND): “I would say it’s, it’s tricky. There’s a there’s a lot of alternatives, a lot of options. You can definitely get home, depending on what route you choose, but I think it’s about how much risk you want to take. If you really want to go there and give it a good shout or if you want to go in there  and just bring it home.”

Sam Watson (IRE): “I think I’d be I think we’ll be surprised by how many make the time could be could be over 50 and up towards 20 which will make it a very competitive cutting edge competition. And that might force more mistakes later on in the competition when people see that actually, you’ve got to gotta go out there and perform. That’s That’s what he’s asking. There’s a lot of a lot of shoulders for glance offs, which I think is the right way to, to ask questions these days.

“We need tomorrow to be important. It is the focal point of the sport. Like for me as a rider, and for other riders, other manages, no one wants to under play the course. No one wants to be complacent. As a rider, I know there’s no risk of that, like when I’m when I’m on the horse, I’m one hundred percent focused. So all the jumps are jumpable by themselves. It reminds me a little bit of Tryon — I think the quantity is what gets you.”