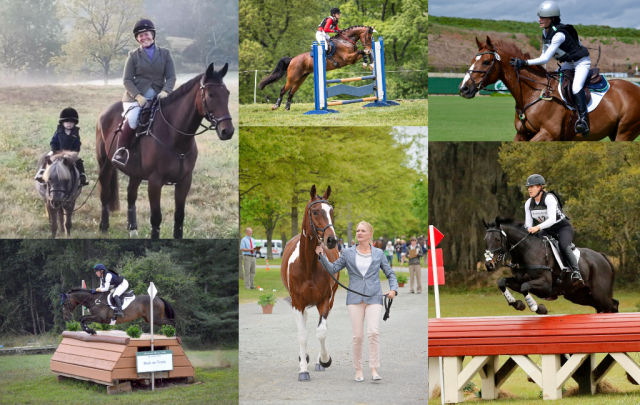 I didn’t know Katharine Morel. She was based in western Canada. I live in the eastern United States. She wintered in Florida while my horse is based out of Aiken. Our paths were unlikely to cross anytime soon.

And now they never will.

Katharine Morel was 33 when she died yesterday.

I am also Jeffie Chapin, who died at the age of 32 last summer warming up for her Prelim cross country round. I am Philippa Humphreys, who died at age 33 at Jersey Fresh in 2016.

I am all of these women.

I didn’t know Ashley Stout but I have known many young women like her, talented and precocious beyond their years and aiming for the stars. I didn’t know Melanie Tallent or Nicole Villers-Amatt but I know many women like both of them, competent riders for the levels they are at, trying to juggle life and riding.

And I am terrified.

It is not the riding itself that scares me. I will continue to head out on cross country with a clear mind and full heart. My biggest fear as I head out of the start box is that of failure, of a stop at most. I am nervous, not scared, and I don’t believe that this death will change that feeling anymore than any of the previous deaths have, not at the actual moment of competition.

In the days and weeks between the events, I am terrified. I don’t know why these women have died. Tragic accident is the official story, and so often is all the information that we as the public receive. But every accident occurs due to the decisions leading up to it. Short term decisions, like choice of pace and balance, medium term decisions like choice of level or year-long goals, and long term decisions like horse suitability and choice of trainer. Every decision leading back, not just by the rider, but also by those surrounding them, is a potential factor leading up to the fatal moment.

I didn’t know Katharine Morel, or Jeffie Chapin, or Philippa Humphreys and more importantly, I don’t know why they died.

I’m not asking out of morbid curiosity. I don’t want to know the details of the fall itself, I don’t need the medical records or rotation angles. I’m asking for a dispassionate, non-judgmental safety investigation with a publicly released report. I’m asking for trained safety experts to investigate and for recommendations for improving safety in the sport. I’m asking for dispassionate conclusions, more nuanced than ‘sometimes riders miss’. I want trained investigators to talk to family, friends, and trainers about decisions that were made, where the rider’s mind was at, what her plan was for the cross-country round. I want top level riders and trainers to look at any video, not just of the accident but also any available from previous shows, and provide dispassionate critique on factors leading to the fall. I want these reports regardless of whether the fatality occurred in competition or at home, training for the sport.

I’m asking because I want to make sure that the decisions I am making now are not leading to a fatal moment.

I don’t want to judge anyone involved. But I don’t want to be told it’s none of my business, or that it is disrespectful to circulate this information. I’m not blaming anyone. It was an accident. But something or multiple things went wrong.

I need to know what they were.

We have lost five women in in eight months in cross-country related accidents in North America alone. I don’t know anything about their accidents except that they died at ‘fence 8’ or ‘in warmup’. I don’t know if investigations were done in any of them. If they were, nothing has ever been released.

In 2001, Dale Earnhardt Sr. died publicly and tragically on the last lap of the Dayton 500. Although 27 others had died in NASCAR races over the prior fifty years, Earnhardt’s death became a catalyst for change due to the publicity it received. Both police and NASCAR undertook safety investigations, which were released to the public in full. NASCAR underwent a serious safety overhaul, both in terms of equipment and policy.

No one has died in NASCAR racing since.

USEF, USEA, can you hear us? Are you investigating? Are you looking into these deaths behind closed doors? Is our sport learning anything from these deaths? And if we are, will you please let us also learn?

I know nothing about what led to the deaths of these women. I cannot learn from their tragedies and cannot take measures to ensure that I do not share their fate for the same reasons. I do not know if there is a common thread or if each died due to different factors.

Please let me learn, so that I might not become one of these women.