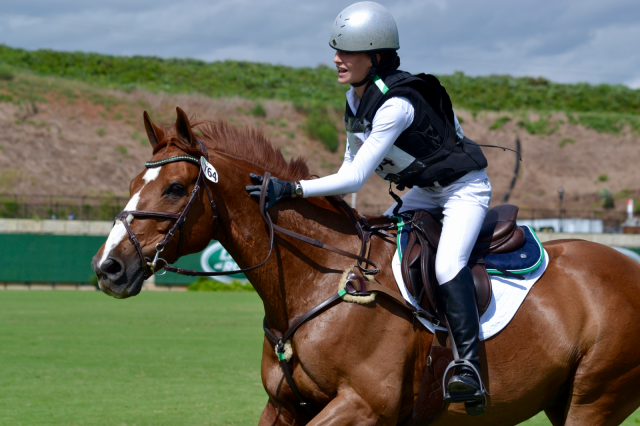 Ashley Stout and Deo Volente at the 2017 American Eventing Championships in Tryon, NC, where they won the Junior Beginner Novice Under-14 division on their dressage score of 19.8. Photo by Leslie Wylie.

We are devastated to report the passing of Ashley Stout after a fatal riding accident yesterday. The 13-year-old from Port Matilda, Pennsylvania, was schooling cross country when her horse had a rotational fall.

Ashley was preparing to represent Area II Young Rider Training Three-Day Team at The Event at Rebecca Farm later this month, in addition to grooming for the Area II North American Youth Championships (NAYC) team. She chronicled her journey to NAYC here.

The accident occurred at about 9:20 a.m. at the Standing Ovation Equestrian Center in Halfmoon Township, according to a report in the Centre Daily Times. Ashley’s horse Avant Garde (“Grady”), a 7-year-old Westphalian gelding (A la Carte x Mensa), broke his neck and was euthanized. Stout was transported by ambulance to Mount Nittany Medical Center, where she was pronounced dead, according to Port Matilda EMS.

Ashley was an eighth-grade student at Park Forest Middle School and was passionate about eventing. She had been actively competing in USEA horse trials for three years and began riding Grady in the spring of 2018 with great success. They had no cross country penalties in their 15 USEA starts together; in June, they won the Junior/Young Rider Open Training division at the NJ Region’s H.T. and finished second in the Prelim/Training division at the Bucks County Horse Park H.T.

The USEA Area II Young Rider program is promoting the use of the hashtag #ride4Ashley in her memory.

EN extends its deepest condolences to Ashley’s family, friends and teammates. Ashley’s memory will be on all of our hearts at Rebecca Farm and beyond.