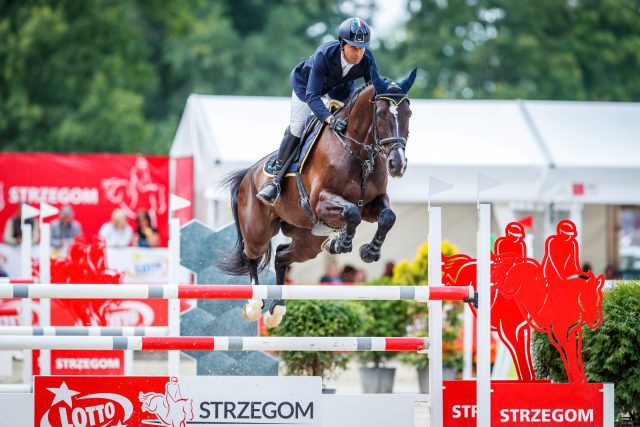 Hollow out your cheese wheels and pass us the extra virgin (that’s olive oil, you heathens) – the Federazione Italiana Sport Equestri has announced its squad of six riders for this month’s European Championships in Luhmühlen (28 August – 1 September). Congratulations to:

“Sadly no [European Championships] for us,” said Umberto in a statement on his personal Instagram account. “Tim did not full recover after [his] last competition at [Haras du Pin] and the short period of time left to the EU event leaves us with no other choice. We will be taking care of Tim and make sure he will be back stronger than ever before!”

New call-up Marco has a wealth of team experience: he’s competed at four senior European Championships (2001, 2003, 2007, and 2011) and four World Equestrian Games (1998, 2002, 2006, 2010), though this will be a first call-up with new ride Junco CP, who finished 24th at last year’s WEG with Spain’s Carlos Diaz Fernandez. In four internationals together so far, they’ve finished inside the top twenty at each – though their last international run, at Pratoni CCI4*-S in June, did see them clock up twenty penalties across the country.]

Italy is one of several nations that will be fighting for a Tokyo qualification in Luhmühlen, though they’re hedging their bets – they’ve fielded a team at every leg of the FEI Nations Cup series so far, and in doing so, they’ve accumulated enough points to lead the standings. With three legs left to go and the Swedes hovering just five points behind, it’s no sure thing, but it’s an impressive insight into chef d’equipe Kathrine Lucheschi‘s commitment to the cause.

The team is headed up by stalwart Vittoria Panizzon, who has represented Italy in two Olympics (2008, 2012), a World Equestrian Games (2014), four senior European Championships (2005, 2007, 2013, 2017) and two Young Rider Europeans (2003, 2004), as well as innumerable Nations Cups. Her ride at Luhmühlen isn’t top horse Borough Pennyz, but rather the British-bred Super Cillious. At just ten years old, he’s already notched up top ten finishes in CCI4*-S competitions at Blenheim, Belton, and in the Nations Cup at Camphire, and an exciting CCI4*-L debut saw him take eleventh place at Blenheim last year.

Giovanni Ugolotti, too, has amassed some crucial team experience, riding for Italy at the 2014 World Equestrian Games and both the 2013 and 2015 European Championships, but it’ll be a first championship call-up for new ride Note Worthy, previously piloted by Oliver Townend. They head to Luhmühlen off the back of an eighth-place finish at Camphire, which helped the Italian team to third place in the Nations Cup. 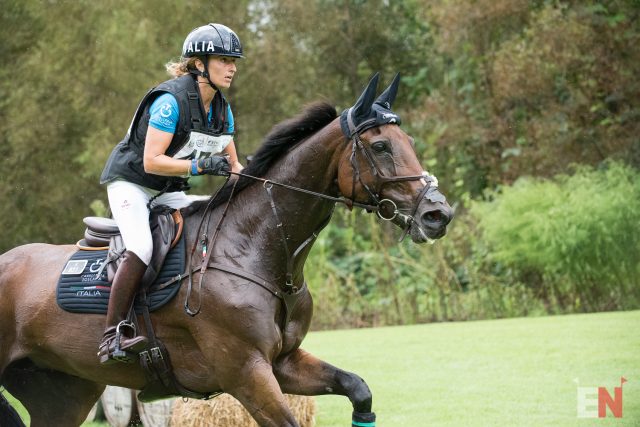 Arianna Schivo also brings forward championship experience, though unlike Vittoria and Gio, hers has been in tandem with her named horse: she and Quefira de l’Ormeau have competed at the 2016 Rio Olympics, last year’s WEG, and two European Championships (2015, 2017). This spring, they finished just outside the top 20 at Badminton. Pietro Roman and Barraduff are a similarly experienced duo – they joined Arianna and Quefira at all four championships. Their last international run was at Luhmühlen, where they finished ninth in the tough CCI4*-S class.

Umberto Riva will be making his senior championship debut after a successful under-18s career that saw him contest two Junior European Championships (2009, 2010) and two Pony Europeans (2007, 2008). The 27-year-old will ride Tim de la Lande, a 12-year-old Selle Français on whom he took the ride at the end of 2017. Since then, they’ve maintained a spotless cross-country record at internationals, jumping clear – and fast – around tracks including Boekelo CCI4*-L and Luhmühlen CCI4*-S. The other two phases aren’t quite as strong, but as far as senior championship debutantes go, they’re a promising pair. Simone Sordi will be making his second championship appearance – he and Amacuzzi started at, though didn’t complete, Tryon last year. This season, they can boast a top-twenty finish in Luhmühlen’s CCI5*-L.